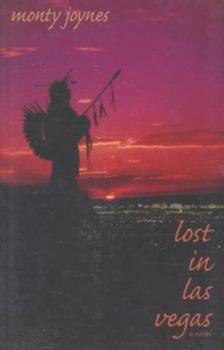 In Naked into the Night, Winn Connover leaves his suburban home and family to begin a new life among the Native Americans of the Southwest. In the second book in Joynes' series, Lost in Los Vegas, Connover, now called "Anglo" by the people of the tribe, is tasked by tribal elders to go to Las Vegas and retrieve a prodigal son. Like himself before his spiritual awakening, White Wings is lost in a world of mediocrity and physical vice. Ultimately, it...

Published by Thriftbooks.com User , 21 years ago
This is the second book in Monty Joynes' series about Anglo (aka Booker Washington), a white man who has meandered his way into the spiritual center of a contracting Pueblo Indian community. I discovered LOST IN LAS VEGAS after stumbling across the initial work, NAKED INTO THE NIGHT, in my local college library. I was quite impressed, all the more so because I discovered half way through reading it that the author lived in my relatively obscure mountain town! I found him in the phone directory, gave him a call, and after a half-hour conversation, immediately went out and bought the other two books. I was not disappointed!LOST IN LAS VEGAS takes Anglo, who has by now earned a place of controversial respect among elders of his adopted Pueblo tribe, on the onerous task of retrieving a lost young Indian leader who is squandering his special dancing talents in the irreverent casinos of Nevada's gambling capitol. With characteristic sangfroid and guileless generosity, Anglo eventually wins the trust of the cynical dancer and even the high class prostitutes who control him. Anglo assists Dancer on an extraordinary vision quest in the desert outside Las Vegas, which realigns the young man with his Native roots. While the outcome is predictable, the journey is uplifting and often spellbinding. This is my favorite of the three works published so far.All the books in Monty Joynes' series belong in the category of what might be called spiritual or allegorical fiction. Although the stories are obviously imaginary, they evoke perennial truths and awaken an intuitive sense of the sublime. I am really surprised these works have not received greater popular acclaim. I found them much better written, more profound and believably realistic than such recent bestsellers as CELESTINE PROPHESY and CONVERSATIONS WITH GOD. Perhaps they'll be the sleepers of the year.
Trustpilot
Copyright © 2022 Thriftbooks.com Terms of Use | Privacy Policy | Do Not Sell My Personal Information | Accessibility Statement
ThriftBooks® and the ThriftBooks® logo are registered trademarks of Thrift Books Global, LLC