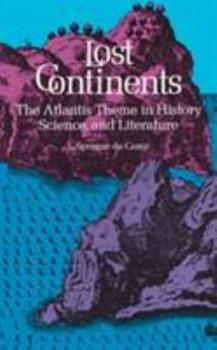 A leading authority examines the facts and fancies behind the Atlantis theme in history, science, and literature. Sources include the classical works from which Plato drew his proposal of the existence of an island continent, Sir Thomas More's Utopia , the Lemurian Continent theory, K. T. Frost's equation of Atlantis with Crete, and many other citations of Atlantis in both famous and lesser-known literature. Related legends are also recounted and...

A Fascinating and well-researched study of Atlantis

Published by Thriftbooks.com User , 14 years ago
Unless your religion requires that you believe in Atlantis, you will find that De Camp presents powerful arguments against the crackpot claims about Atlantis. He tells a compelling history that is supported by the solid scholarship that is often lacking in many books on Atlantis. You will find yourself amazed at the forgotten history that De Camp uncovers, such as the following: "One contributor to this stream of speculation was Francis Wilford, who in 1805 advanced an Atlanto-Druidic hypothesis according to which the British Isles were a remnant of a former Atlantic continent where the events of the Old Testament had actually taken place (and not in Palestine as most people thought)" (p. 187). De Camp gives the following caution that the crackpots will never accept: "Myths and legends, then, do often have a basis of fact. But the factual part of the myth may be so small and muddled that you cannot possibly reconstruct history from the legend. As the historian Grote said: `The lesson must be learnt, hard and painful thought it may be, that no imaginable reach of the critical acumen will of itself enable us to discriminate fancy from realty, in the absence of a tolerable stock of evidence" (p. 250). See also my five-star reviews of "Lost Tribes and Sunken Continents: Myth and Method in the Study of the American Indians," by Robert Wauchope, and "The Mound Builders: The Archaeology of a Myth," by Robert Silverberg. Click on the following links and scroll down: Lost Tribes and Sunken Continents Myth Method in the Mound Builders Your comments--positive or negative--on my reviews are appreciated. Thanks.

Published by Thriftbooks.com User , 22 years ago
L. Sprague de Camp does a masterful job of refuting the Atlantis legend. His descriptions of geography are easily understood by the average reader.
Copyright © 2020 Thriftbooks.com Terms of Use | Privacy Policy | Do Not Sell My Personal Information | Accessibility Statement
ThriftBooks® and the ThriftBooks® logo are registered trademarks of Thrift Books Global, LLC