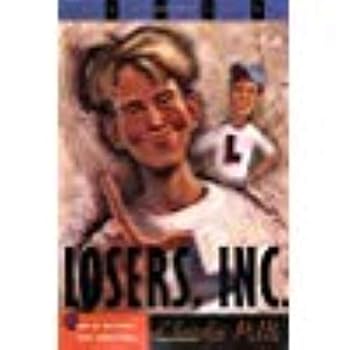 This description may be from another edition of this product. Ethan Winfield has never been an academic or athletic star like his older brother, Peter. But does that make him a failure? Of course not. Still, Ethan and his best friend, Julius Zimmerman, decide...

Published by Thriftbooks.com User , 15 years ago
My name is Max Mordini. About 3-4 weeks ago I stumbled onto a book that I bought a year or two ago called Losers Inc. The book looked interesting and I decided to read it. After I read the first fifteen pages I was already hooked and I wanted to see what would happen throughout the rest of the book. I will now give you a summary of the book. The book is about a loser named Ethan Windfield and his best friend Julius. Ethan thought that life was completely unfair; and to make matters worse his brother was a stud. He hated this because he was always compared to his brother who was good at everything academically and sportswise. This was part of why life was so unfair but there were other things besides being compared to his brother. For example, after Julius and Ethan finally finished their book reports their teacher told them that their books were to short. Another example is that the ugliest girl in the whole school liked Ethan. Ethan and Julius started a club called Losers inc. Their motto was " Some are born losers and some acheive losing. A couple of days after Losers inc. was started Ethan and julius's eyes get caught on a beautiful student teacher name Grace. They were both in love with the teacher and they couldn't stop thinking about her and looked for her in every class until they got to their first period room. Sure enough Grace was sitting at the desk in first period science. Right away Ethan knew he was in love and he would do anything to impress her. After science ended Ethan realized that the school science fair was coming up. Every year he worked with Julius on his project but he knew that if he wanted to impress her he couldn't work with Julius. They got to Julius's house and Ethan didn't Know how to brake it to Julius but eventually The words ( I dont wont to work with you this year) slipped out. Ethan didn't know what to do for his project but he knew he wanted it to be creative. Eventually Ethan was playing basketball and asked himself why does a basketball bounce? This was what he was going to do for his project, see how balls bouce the way they do, and why they bounce like that. Ethan also didn't want to be made a fool of in English so he picked a book that was 422 pages. He finished the whole entire thing and could not wait for the day he would perform his report. Eventually that day came and Ethan got his report over with and it was perfect. After class the teacher asked if he could talk to Ethan in private. The teacher didn't beileve that Ethan read a book 400 pages. Ethan was crushed he didn't know what to say. He read every page. Eventually she was convinced and gave Ethan an A. Now that Ethan was becoming a better student he was becoming less of a loser. When the science fair came around he was excited. He thought his expirement could really go to the regionals. Especially because he got tips from Peter who has one the science fair every year. When he brought his experiment and set up his booth, it looke

losers inc in my way

Published by Thriftbooks.com User , 19 years ago
well I'd say the book that i read was nice but boring to it staed in like 3 spots and it was a slow book . A summary of the book is there are to friend that mack this club called losers inc ... but one of the kids in the club are slitly bracking the rules yes there are rules ... 1. is that you have to do bad book reports and no reading big books. you have to do bad science projects. And that is all the rules. but a new teacher is in town and the 2 kids that made the club are in love with the teacher and 1 of the boys want to inpress the teacher by doing a good science project and a good book report. read this book it is cool

Published by Thriftbooks.com User , 19 years ago
This book was inspiring, funny, and motivating. This book was very realistic. It's a fun book to read, and you never want to stop. I was actually sad when I finished it, because I wanted it to go on.

Are You A Loser?

Published by Thriftbooks.com User , 21 years ago
...even if you are not a loser, I'm sure you will like this book. It is a funny story about two boys who think they are losers...until a beautiful student teacher comes to their Science class. Then all of a sudden they want to be winners. Read this exciting, yet humerous book to find out what happens.

I recommend this book to people who don't get good grades.

Published by Thriftbooks.com User , 22 years ago
Ethan and Julius are middle school students. Everybody including themselves think that they are losers at school. They always read the shortest books for book reports. They never win at the annual science fair. Ethan and Julius suck at sports too. So Julius thought of making a club called Losers Inc. There are only two members in the club. Julius is the president and Ethan is the vise president of the club. But, when Ms Gunderson who is a student teacher comes, both Ethan and Julius fall in love with her secretly. Then Ethan tries to impress her by reading a 422-page book for a book report. Ms Gunderson did not believe he actually read such a long book and told him to read short ones. His friend Julius stood up for him and tried to tell the teacher that he had really read the book "A City for Two". Ethan also tried to impress the teacher by winning the Nobel Peace Prize by winning the science fair. All the previous years he got his ideas from a book his mother borrowed from the library. This year he thought of the idea for the science fair himself. He wants to find out why some balls bounce and some don't. He tested ten different balls including a basketball, soccer, football, and tennis, baseball on three different surfaces - carpet, wooden floor and concrete. Isn't a shame that he didn't win after all his effort? He becomes a better student. He got three A's in math, one A in science and one in English. His friend Julius thought he wasn't a loser after all. Julius thought he is the only loser in school and the club Losers Inc is no longer needed.
Copyright © 2020 Thriftbooks.com Terms of Use | Privacy Policy | Do Not Sell My Personal Information | Accessibility Statement
ThriftBooks® and the ThriftBooks® logo are registered trademarks of Thrift Books Global, LLC