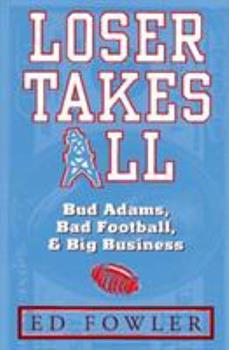 A highly entertaining expose of the Houston Oilers, "Loser Takes All" is a story of scheming, backstabbing, and abject failure--except that, because of the wacky nature of today's sports business, Bud Adams' team is worth untold millions and gets more valuable every day.

Published by Thriftbooks.com User , 15 years ago
The Oilers lost the largest comeback in NFL history, tied for the best record in the league, traded the greatest player in franchise history for a fourth round draft pick, and left the city all in the course of three years. If you lived in Houston and were younger than 20, as I was, Luv Ya Blue was a myth and the Run-N-Shoot Oilers were as good as it got. To see that much genuine disappointment (expectations minus results) in your sports team, when you're too young to love, risk or sacrifice much else, is the closest you can get to personal loss and suffering. The very best mayor and one of the greatest oilmen in the Energy Capital of the World had a clash of egos, cost the county $300 million in tax dollars, 35 years of tradition, five silent autumns in the BIGGEST FOOTBALL CITY ON THE PLANET, gave the Rockets and the Astros the leverage they needed to blackmail sports fans for $400 million more and convinced me, at an early age, of the fraudulence, wastefulness and stupidity of sports fandom. Please read this book for the entire, sickening history of a FAILED franchise in spite of every social, economic and competitive advantage imaginable.

Almost makes you want to stop being an NFL fan!

Published by Thriftbooks.com User , 23 years ago
Being a fan of pro football in general, I was quite interested in Fowler's book the first time I saw it at a bookstore. I had an opportunity to see the Oilers, in their second-to-last year in Houston, in a pre-season game against Dallas played in San Antonio in 1995. Two things stick out in my mind from the experience: 1) The constant scoreboard advertisements proclaiming "Oilers Regular Season Game Tickets - Great Seats Still Available!",(this just a week before the start of the regular season) 2) the incredibly low number of Oilers fans there, even though San Antonio is the same distance from Dallas or Houston. All of this made me think, where does Houston get off lobbying for a new or a relocated franchise after turning their backs on the Oilers the way they did? Fowler's book answered the question, and many others.Fowler asserts that, within years of Bud Adams' founding of the team, as well as partially founding the American Football League, Adams was already threatening to move his franchise, and his dictatorial regime would only get worse as the years went on. Fowler also asserts that, had Adams minded his own business and stayed out of football operations, the Oilers might well have made it to a Super Bowl in the '70's, and maybe even brought home a Lombardi trophy.And although Adams and his team seem happier now in Nashville, with a new name and logo to boot, Fowler tells that moving the team there was not without its own controversy. Fowler also explains, in plain English, the politics and math of building a new stadium. (Being that my favorite team is the New England Patriots, this section was of special interest to me.) The author asserts that Bud Adams, as well as any other owner of a major league franchise, could easily fund a stadium, and reap profits within just a few years...makes you think.I would highly recommend this book to anyone interested in football, the Oilers (now Titans), or big business in general...or even someone just looking for a few laughs! Fowler's biting commentary on Houston's least favorite son is hilarious.

Published by Thriftbooks.com User , 24 years ago
Houston Chronicle columnist Fowler, who covered the Oilers for 17 seasons, has written a forthright account of a pro football team whose ineptitude is a matter of public record. He charges the team and its management with "turmoil, intrigue, backstabbing, and buffoonery." Owner Bud Adams began his business career with a grubstake from his father, head of Phillips 66 petroleum, and later was a founder of the American Football League, of which his Oilers were the champs in 1960 and 1961. The AFL and the NFL played their first merged season in 1970, and for 27 years the Houston team has never played in a Super Bowl despite having one of the strongest rosters. But front-office interference, inferior coaching and Adam's penny-pinching spelled trouble, charges Fowler, which came to a head when the owner demanded a new stadium as the price for staying put. Failing to get it and "snarling like a baboon," he moved the team to Nashville, where it is playing its initial season this fall. This is not the account of a franchise warts and all, but of one that is all warts, at least according to Fowler.
Trustpilot
Copyright © 2022 Thriftbooks.com Terms of Use | Privacy Policy | Do Not Sell My Personal Information | Accessibility Statement
ThriftBooks® and the ThriftBooks® logo are registered trademarks of Thrift Books Global, LLC