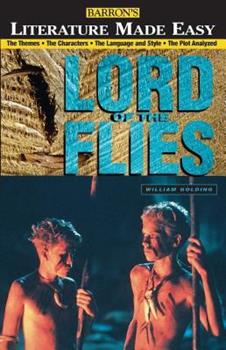 Lord of the Flies: The Themes - The Characters - The Language and Style - The Plot Analyzed

by Tony Buzan and Mary Hartley

If you're looking for an explanation of Lord of the Flies 's themes, plot points, character actions and motivations, plus discussions of William Golding's unique literary style and point of view, reach for the Literature Made Easy Series . This enlightening guide uses meaningful text, extensive illustrations and imaginative graphics to make this novel clearer, livelier, and more easily understood than ordinary literature plot summaries. An unusual...

Published by Thriftbooks.com User , 17 years ago
If not for anything else, William Golding's LORD OF THE FLIES (1954) is remarkable for having come out at a time when Western society was being bombarded with visions of totalitarian nightmares. The Nazis were gone, but still in modern memory. Russia's totalitarian state was a constant threat. McCarthyism hovered over everyone's privacy, as did J. Edgar Hoover. And recent fiction, like Aldous Huxley's BRAVE NEW WORLD and, especially, George Orwell's 1984 presented world views where the human spirit is all but squelched by governments and technologies.LORD OF THE FLIES, in its own way, says, "Hold on a second! Humans do need to be regulated. And they do need to protect themselves from each other." His tale is a warning: Humanity, without government, will degenerate into savagery and anarchy. And that is precisely what happens in this book. You know the plot, by now. But what has to be mentioned is that William Golding is a visionary who has the story-telling mastery to convey and do justice to that vision. LORD OF THE FLIES is a remarkable and powerful book, one that should be on everyone's bookshelf.

More than just a book

Published by Thriftbooks.com User , 20 years ago
William Golding wrote this book as a response to "Coral Island," in which a group of boys shipwrecked on an island make Christians out of cannibals, hunt pigs but do not spill blood, and are cheerfully rescued. Obviously, Lord of the Flies is much more than an adventure story about good little boys. It is an exploration into the darker side of man and the true source of the ?beast,? or Devil. Meet Ralph, who represents sanity, common sense, and the ?conscience? of man; Jack, who loves nothing more than hunting, blood, and power, and who Freudians might say embodies the Id; Piggy, who personifies intelligence, logic, and reason; and Simon, who discovers the true nature of the beast and represents a ray of hope for mankind. I love this book because contained in less than 200 pages is an insight into human nature and the failings of society. When you read this, be prepared not only to examine the book and all its symbolism but yourself and your civilization.

Human Nature through the eyes of William Golding

Published by Thriftbooks.com User , 20 years ago
With this his first novel, author William Golding wrote a novel that he could never surpass in greatness. Lord of the Flies is a novel about our human nature. Too often I think, people jump to quick conclusions about the book and Golding's stand on human nature. "His stance is too pessimistic" or "That books really gross." What these people fail to realize is that Golding tried to paint a picture of human nature as he saw it. He wasn't making things up, I don't think he was particularly angry, he wrote Lord of the Flies to expose people to the atrocities that he witnessed in World War II. One of the largest underlying principles in Lord of the Flies is of course, human nature. William Golding gives the reader three interesting characters to analyze: Jack, Piggy, and Ralph. It's quite apparent as you read the novel that Golding must have read a little Sigmund Freud before writing Lord of the Flies. Let's start with Jack. Jack is the definite Id on the island. He wants to survive but he also wants to eat meat and have fun. Jack is clearly unable to control these urges and in turn has a pretty large influence on the other boys on the island. Piggy is the definite Superego on the island. Piggy is always referring to "well my auntie..." and always finds an excuse not to do something. Piggy has no intentions of satisfying his id, and in turn influences only Ralph and Simon. Ralph on the other hand, takes the middle road. He is clearly trying to find a way to satisfy his id, but he can't seem to find one. Take what he said in chapter eight for instance: "...Without the fire we can't be rescued. I'd like to put on war-paint and be a savage. But we must keep the fire burning..." Ralph is definitely trying to satisfy his id, but those laws of culture still remain with him, telling him it's not the thing a proper English boy should do. Another interesting connection I made while reading, was one between Jack's status of leader and the ideology of Thomas Hobbes. Unlike Hobbes though, Jack's power was used for quite the opposite affect. Hobbes believed that in order for a perfect society to exist, a higher power had to be in charge, in order to keep the other citizens in check. Jack was that higher power on the island. He was in control of everything, however, his power had quite the opposite affect of "keeping people in check." Jack used the powerful persuasion of the id to persuade others. Jack could promise meat and fun, whereas Ralph could promise labor and fruit, something the other boys definitely didn't want. Lord of the Flies is also a novel filled with symbolism. Probably the most important of these symbols was the conch. The conchs represented several things, including freedom and order on the island, and possibly, even for a short time, unity between the boys. One of the most interesting aspects to the conch was the fact that Piggy couldn't use it. This shows a lack of leadership or strength on Piggy's part. The conch became a tool of free speech.

Published by Thriftbooks.com User , 20 years ago
A group of young schoolchildren (all male) are evacuated from Britain in the wake of a nuclear war. As it turns out, their airplane has crashed onto an uninhabited island, with the result that there are no adult survivors to be found. In the opening scenes, children begin to slowly emerge from the forest and converge on the beach at the summons of the book's main character Ralph. As they are now thrust together in this new environment, it becomes apparent that a new sort of social order is going to be necessary. What follows for the length of the book is an elaborate working out of this (attempted) democratic style of social order.After an initial confrontation of two groups on the beach (one led by Ralph, the other led by Jack), Ralph is elected as leader. Early on, we see that Ralph's interests tend to be "group" oriented. His concern is with rescue, and with keeping the others focused on this objective through the maintenance of a signal fire. We see shadows in Jack however, that are more temporal, concerned with the hungry rumble in his stomach. And here we sense the beginnings of conflict, and the age-old fact looming to remind us that, even in democracy we need to recognize submission to elected leadership.In a pivotal chapter (ch.5) one of the children declares "We're drifting and things are going rotten. At home there was always a grown-up." The significance here is that, by filling his island with castaway children (rather than adults) Golding allows us to consider more aspects of innate or instinctual human nature than if it had been otherwise. Children are raw. If this island were inhabited by castaway "grown-ups" the results and conclusions they came to would be conditioned by all of the ingenuity, resourcefulness, and maturity with which they'd have dealt with previous struggles and needs. Socially, they would have been able to draw upon the results (good or bad) of past decisions made in the clash and clang of more mature inclinations and inhibitions. But children are not afforded this perspective of experience. Golding populates his island with children because he wants to emphasize the full range of possibilities that are INNATE in the human condition, typified in this case by Ralph's tears on the very last page. Tears, we are told, which he wept "for the end of innocence, the darkness of man's heart."With the frenzied killing of Simon in ch.9 comes the real disintegration; a rapid descent into moral anarchy. Ralph is the only one who dares to say it... "That was murder." He has the keenest sense of the mob mentality that will inevitably run roughshod over the individual conscience. Earlier than any of the others he understands their own capacity for evil when he says to Piggy, "I'm frightened. Of us."I had the heartrate of a chased fox in the last chapter... you will too. And when the question was flung out at the end "Who's boss here?"... Ralph's loud cry of "I am" rang through my very soul. Those two words signify the triumph o

A look at human nature

Published by Thriftbooks.com User , 21 years ago
I read this book many years ago in high school, and found it very philosophical. It isn't conforting in any sense of the word, but it gives a powerful message regarding the nature of humans. The whole conflict between Jack and Ralph is petty, but that was the point. Written during the horrors of WWII, W. Golding wanted to show the readers that the only difference between human beings and beasts is that we are governed by laws and civilization, without which we do become savages. Disturbing, extremely, but that doesn't mean it isn't a good book. Someone once told me the purpose of art and literature is to make an audience think through its powerful messages, not to be comfortable to place in a "hospital" setting. Lord of the Flies does exactly that. Through vivid descriptions and masterful symbolism, this book conveys a powerful message regarding human nature. A previous reader claimed, due to the Columbine shootings, this book should not be read in high schools, I couldn't disagree more. It is because of such atrocious acts that the message this book contains is needed more than ever.
Copyright © 2020 Thriftbooks.com Terms of Use | Privacy Policy | Do Not Sell My Personal Information | Accessibility Statement
ThriftBooks® and the ThriftBooks® logo are registered trademarks of Thrift Books Global, LLC