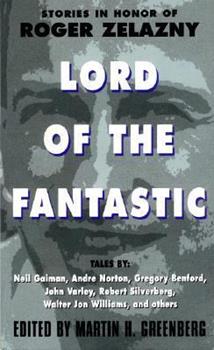 Lord of the Fantastic:: Stories in Honor of Roger Zelazny

Roger ZelanyHe created worlds and legends no one else could have imagined.His groundbreaking fiction seamlessly melded the primaland the highest tech. By combining icon and hoary archetype withnew modem myths of his own invention, he stretched and advanceda speculative genre into unexplored areas beyond all pre-existingboundaries. Now twenty-five of his fellow artists in the dual realms ofthe astounding future-possible and the wildly, improbably wondrous'Pay...

A fine tribute to a fantastic writer

Published by Thriftbooks.com User , 16 years ago
Lord of the Fantastic doesn't contain any of Roger's Zelazny's work. Instead, it's a big wake being held in his honor, where various writers stand up, tell a story they think Roger would have liked, and then share some of their history with him. The stories are good, and the memories add a bittersweet tinge to the collection. A few stories that stuck in my mind: "Calling Pittsburgh", by Steven Brust, is an interesting piece about a gambler trying to win back ownership of the earth, piecemeal, from the aliens that now own it. The only problem is, you're not a good gambler unless you can figure out from how your opponent is acting whether he's bluffing or not. "Southern Discomfort", by Jack C. Haldeman II, is about a fairy kicked out of her homeland for playing mean pranks. All she has to do to come back is to perform one unselfish deed, but she likes it here. "The Flying Dutchman", by John Varley, is a nasty piece about how sometimes you really can't ever get home again. But maybe you can make a connection in Cleveland? "Ninekiller and the Neterw", by William Sanders, is an adventure piece set in Egypt, featuring a pilot who is forced down in the middle of the desert with a archaeologist who is more than he seems. Luckily, his dead Grandfather hangs around to warn of trouble. "Call Me Titan", by Robert Silverberg, is a short piece about one of the original Greek titans escaping his prison to get revenge on Zeus. But where do you find the king of the gods in 1998? "The Halfway House at the Heart of Darkness", by William Browning Spencer, deals with a new form of addiction in the future - if virtual reality can be anything you want to dream of, why ever leave it? And what if rehabilitating you was illegal? "Only the End of the World Again", by Neil Gaiman, is another of his short brilliant pieces. This one involves a Mr. Larry Talbot, late of Innsmouth, Mass. That's only a few of the stories, and not even all of the best. Heck, even the worst stories in this collection are pretty good - Martin Greenberg is a good editor of collections, but in this volume he's really pulled off a fine job. This is undoubtedly helped by the fact that every one of these authors were inspired or helped by Roger Zelazny, and came up with their best to honor him. My verdict: Well worth the time and trouble to read, both for the marvelous stories and for the peeks at how one man has cast his shadow over so much of the science fiction and fantasy landscape.

Worth it....we miss you Zelazny.

Published by Thriftbooks.com User , 22 years ago
I enjoyed this book, and although not EVERY story was great, they were very good. I think that it makes a fine book by itself, and a great book in memory of the late Roger Zelazny. This is a must have for Zelazny fans.

Published by Thriftbooks.com User , 22 years ago
I was one of the contributors to this book, which was originally to be titled FRIENDS OF ROGER. I still wish it had been . . . although a book by all of Roger's friends would be a very thick one; I don't believe there was anyone who knew him personally who didn't love him - and I think everyone who knew and loved his writing felt they had lost a friend when he died.I won't comment on my own story, but there are plenty of others of outstanding quality, well worth the price; John Varley's is my pick for best of the bunch, with Walter Jon Williams in there pretty close . . . but really, you could hardly go wrong just opening this book at any one of the stories and beginning there.The cover is, admittedly, butt-ugly; and this should have been a hardback - as much money as Roger made for Avon in his lifetime, you'd think they could do a little better by his memory - but never mind; the contents more than make up for the exterior.If you are one of those (us) who cherish Roger's memory, buy this book as your expression of appreciation for his memory. Or if you're just looking for a lot of damned good reading . . . .
Copyright © 2020 Thriftbooks.com Terms of Use | Privacy Policy | Do Not Sell My Personal Information | Accessibility Statement
ThriftBooks® and the ThriftBooks® logo are registered trademarks of Thrift Books Global, LLC