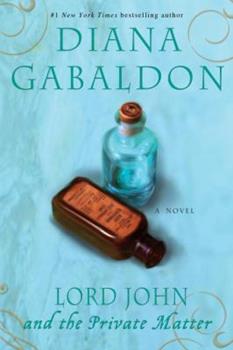 Lord John and the Private Matter

NEW YORK TIMES BESTSELLER - Diana Gabaldon weaves a dazzling tale of history, intrigue, and suspense in this first novel featuring one of her most popular characters from the Outlander saga: Lord John Grey. The year is 1757. On a clear morning in mid-June, Lord John Grey emerges from London's Beefsteak Club, his mind in turmoil. A nobleman and a high-ranking officer in His Majesty's army, Grey has just witnessed something shocking. But his efforts...

Published by Erica , 4 months ago
I ordered this book in like new condition.. the book had a chunk taken out of the spine edge and there is no slip cover.. I am more upset about there not being a slip cover… there was a good condition on sale the same time that said no slip cover. The only reason I Bought the like new one.

Published by Thriftbooks.com User , 3 years ago
I love the Outlander series, featuring Jamie and Clair, but this novel is so slow; I almost gave up reading it several times. I finally slogged through. It isn't suspenseful.

Published by Thriftbooks.com User , 16 years ago
I feel duty-bound to write a positive review of LORD JOHN AND THE PRIVATE MATTER, since so many of the reviews here have been negative. Those reviews almost decided me against purchasing the book, but, given Gabaldon's excellent writing in the OUTLANDER series, four of which I've read, I figured LORD JOHN would be just as well written. I'm glad I decided in favor of reading it. Now, don't get me wrong. This is NOT a love story, so if you're expecting a hero and heroine like Jamie and Claire, you'll be disappointed. On the other hand, if you enjoy murder mysteries like those in the Fiona Buckley series, then LORD JOHN is for you. Moreover, if you're like me and appreciate Gabaldon's scrupulous attention to historical detail with respect to the location, habits, dress, language and behavior of 18th century England, then you won't be disappointed. John Grey is an immensely sympathetic protagonist. What I find intriguing about him is that he is obviously masculine and handsome, characteristics we ladies have come to expect in our romantic heroes; yet, he is also a homosexual, and I had to keep reminding myself of this as I read. I wasn't sure how Gabaldon would handle his "amorous exploits," but she does this tastefully. In any event, the main thrust of the novel is the murder mystery and the mystery of his cousin's fiance's "affliction." But I found that the juxtaposition of Lord John's sexual orientation and his "tough-guy" military career made for a complex and intriguing character. I certainly could sympathize with his need to conceal his homosexuality in an England where such behavior is not only against the law, but subject to extreme punishment, not to mention what revelation of his secret would mean for his and his family's reputations. He can't help the way he was born, but he handles it with dignity and style. The plot is definitely complex, but one comes to expect that of Gabaldon's novels. I found myself carefully reading the last few chapters to make sure I understood how all of the plot points were resolved, but this didn't detract from my enjoyment of the book. It was a good read, and I look forward to more Lord John books.

Published by Thriftbooks.com User , 17 years ago
This book seems to have been greatly underrated by fans of the author's Outlander series. I don't care much for romance novels, but I loved this witty, clever mystery that takes place in 1757 London. Lord John is lovable, eccentric, clever and intuitive, but still surprised and even occasionally embarrassed by the events as they unfold. The story is intelligent and subtle without being difficult to follow. Historical content is presented accurately and adds greatly to the richness of the tale. The author doesn't bore you with long descriptions, but rather uses a few sparse details to create vivid pictures. I'm terribly disappointed that there's only one Lord John mystery. I could happily read many more. Note on the audio version: The reader, Jeff Woodman, is fabulous. Besides adding the proper subtle tones to the speech, he's a master of British accents. Each spoken voice is unique and rich with personality. I'd recommend this version both to fans of audio and those who've never tried it.

A radical -- and welcome -- departure from Gabaldon's Usual Style...

Published by Thriftbooks.com User , 17 years ago
I encountered Dianas Gabaldon's Outlander series a number of years ago. I greatly enjoyed the first book (Outlander) and immediately got all the other books available in the series. But my enthusiasm waned pretty quickly, as I waded through the increasingly long, turgid and convoluted sagas. By the time I had finished the fourth book, I gave up, exhausted. Clearly, I thought, this author is in desperate need of an editor -- but has no doubt become such a star author for her publishers that no one would presume to do any such thing. Fast forward several years. I saw the book, "Lord John and and the Private Matter" in the library, was interested in the plot description, signed it out, and enjoyed it immensely. It was only when I looked up other books by the same author that I realized that she and the author of the Outlander series were one in the same. I can certainly see why lovers of the Outlander books would find this one not to their liking. Where Jamie Frazier and his time-shifted wife are red-blooded, straightforward people in a slowly paced narrative enlivened with occasional bouts of swashbuckling and populated by characters and subplots in the thousands, Lord John is an 18th century metrosexual, of subtle intelligence, flawless fashion sense -- and, yes, a decided penchant for beautiful young men like himself -- whose tale is told in a remarkably taut, well-plotted and succinct narrative. As a well-off minor aristocrat and major in the British army, Lord John has two tasks: 1) Find out if his sister's betrothed is, as he suspects, afflicted with "The Pox" (siphilis); and 2) Investigage the murder of a member of his own regiment who might be spying for the French. As he conducts his inquiries -- and as he begins to find connections between his two tasks -- we follow him into the most fashionable houses in London, as well as deep into its underworld of brothels and the secret world of Lavender House where 'mollies' (homosexuals)can take their pleasure in relative anonymity. Along the way, we learn quite a bit about 18th Century London in the decades before the American and French Revolution -- its mores, wars, fashions and vices. The historical insights are just enough to add context to the events in the story, without ever slowing the pace. "Lord John and the Private Matter" is not an action yarn. The violence, such as it is, mostly happens offstage and most of the clues to the ultimate solution are presented in the course of the numberous conversations Lord John has with the other players in this 'drama of manners'. I hope this is the beginning of a new series -- and that Ms. Gabaldon keeps to the same deft plotting and concise narration. It would be a shame to have this series fall victim to the page inflation of the Outlander books.

Lord John and the Private Matter Mentions in Our Blog