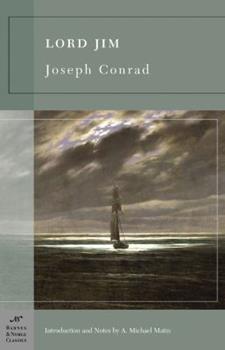 "Lord Jim," by Joseph Conrad, is part of the ""Barnes & Noble Classics" "series, which offers quality editions at affordable prices to the student and the general reader, including new scholarship, thoughtful design, and pages of carefully crafted extras. Here are some of the remarkable features of "Barnes & Noble Classics" New introductions commissioned from today's top writers and scholars Biographies of the authors Chronologies of contemporary...

Published by Thriftbooks.com User , 14 years ago
By Giordano Bruno (Wherever I am, I am.) - See all my reviews That title is a knock-off of Ishmael's description of Captain Ahab in Melville's Moby Dick. My guess is that Joseph Conrad never read Moby Dick. His writing career unfolded during the decades before the rediscovery of Melville. I have no doubt that Conrad would have burst with appreciation if he'd encountered the other "greatest" writer of sea tales in English or any language. Lord Jim begins to remind me of Moby Dick in chapter four, when the straightforward 3rd person narrative suddenly shifts to Conrad's typically indirect narration in the first person voice of Captain Marlow. Thereafter, Jim's whole adventure is embedded in Marlow's rambling discourse, to the utter despair of high school sophomores and middle-age armchair travelers who "just want the story, ma'm." So who is Marlow? Is he just a convenient mask for Conrad? Why is so much text devoted to Marlow's musing about his own "peripheral" role in the story and his own unresolved understanding of Jim? Does "Jim" really exist, outside of Marlow's penchant for entertaining friends with bizarre anecdotes? (The last few chapters, cast as a letter from Marlow to a friend, would seem to be intended to 'document' the truth of the tale.) Dear reader, you've better notice that Jim is remarkably inarticulate in Marlow's account; when he speaks, he almost never finishes a sentence, never establishes a discourse on his own terms. The Jim we get to know is as much a projection of Marlow's ego as Jesus of Nazareth was of the Apostle Paul's. And then, of course, we still have to wonder about the invisible author behind the so-obtrusive narrator. What I'm arguing here is that the novel Lord Jim is about as much about the title character as Moby Dick is about the whale. Ahab's quest for ineffable vengeance by death is almost exactly parallel to Jim's quest for redemption by death. Both are ripping good adventure tales that COULD be told in eighty-page novellas or made into films from which the narrative voices are stripped and scattered on the floor of the editing studio. But just as the main character in Moby Dick is Ishmael, Marlow is the heart of obscurity in Lord Jim. To really relish either book, the reader has to take the narrator's epiphanies seriously. Are we on any kind of solid ground in saying that Melville's novel is about a socially orphaned Ishmael projecting his need for a father Ahab? Shall we then risk the notion that Conrad's novel is about a psychologically impotent Marlow projecting his need for a son on Tuan Jim? Hey, reader! If you steal my notion and write a grad seminar paper with it, don't forget to vote "helpful" on my review! This is an absurdly great novel, a book to read thoughtfully with mounting involvement until you can't attend to anything else before finishing it, a book to read again and again as your life changes perspective on itself. If you have doubts about Conrad's mastery of the English lan

Published by Thriftbooks.com User , 14 years ago
Joseph Conrad's tale of Lord Jim is a warning against taking yourself too seriously, expecting too much of yourself, failing to forgive yourself. Jim is such a noble character but is he just another manifestation of Dostoevsky's 'The Idiot' - too honourable to be a survivor. Of course Conrad conspires greatly against Jim. With Jim's first great mistake - the one that, in his eyes, blighted him forever, it is as if God himself pardoned Jim, absolved him of any blame because there were no victims. And yet Jim cannot put the unfortunate aside push on with an effective life. But that's not quite true - eventually he does find a place for himself and the rest was up to Conrad's masterful plotting. I also enjoy immensely the method Conrad uses of telling a tale through the eyes of an observer - Marlowe. While we are all participants in life, we are also very much more observers - if we care to observe. other recommendations: 'Victory', 'Chance' - Joseph Conrad 'Virgin Soil' - Turgenev

Published by Thriftbooks.com User , 15 years ago
I did not expect to enjoy this book, and it took a little while to get into it, but I found myself enthralled--and by the conclusion, moved--almost against my will. Conrad's style here is a bit moody for my personal taste, but beautiful nonetheless. He makes brilliant use of the English language and is a master of the judicious metaphor. He draws you in as he slowly unravels his tale of an "overly romantic" man and his "exquisite egoism." While Conrad doesn't quite compare with the great romanticists like Hugo and Dostoevsky, Lord Jim is one of the last great romantic novels, certainly far superior to almost any fiction being written today.

a delicate picture of rough brutality

Published by Thriftbooks.com User , 20 years ago
After reading this book (along with several other of Conrad's books) I am under the impression that Joseph Conrad may very well be my favorite author. Here is another masterpiece, a deeply incisive study of character of the motivation and the ultimate failure of all high-minded ideals. Granted my own personal world view falls directly in line with this realization and therefore prejudices me towards anything the man might write, but, when considering such a lofty title as 'favorite author' one must regard other aspects of the novelist's creation. As with the others, Conrad wins by the power of his stories.Lord Jim is my least favorite of the the four books I have read by Conrad. The story is rather scattered: a righteous young man does something wrong that he holds himself far too accountable for and the public shame the action brought him exaggerates the reality of his failure and makes him believe the rumors swirling around about his so-called cowardice. He spends the remainder of his life trying to reclaim his self-regard, mostly exaggerating his own importance in matters he hardly understands. His goal is to liberate the primitive people of the jungle paradise he inadvertantly finds himself in (due to an effort to escape every particle of the world he once inhabited) and his once high-minded ideals and regard for himself lead him to allow those people to consider him almost a God.Jim likes being a God and considers himself a just and fair one. He treats everyone equally and gives to his people the knowledge of modern science and medicine as well as the everyday archetecture and understanding of trade that those primitive folks would otherwise be years from comprehending.Of course everything ends in failure and misery and of course Jim's restored name will be returned to its demonic status, but the whole point of the novel seems to me that one can not escape their past. Jim, for all his courage in the line of fire has tried to avoid all memory of the once shameful act of his former life and by doing so becomes destined to repeat his mistakes.Lord Jim is far more expansive than the story it sets out to tell, ultimately giving a warning on the nature of history and general humanity that only a writer of Conrad's statue could hope to help us understand.If there is a flaw it is not one to be taken literally. Conrad was a master of structural experimentation and with Lord Jim he starts with a standard third person narrative to relate the background and personalities of his characters and then somehow merges this into a second person narrative of a man, years from the events he is relating, telling of the legend of Jim. It is a brilliant innovation that starts off a little awkward and might lead to confusion in spots as the story verges into its most important parts under the uncertain guidence of a narrator who, for all his insight into others, seems unwilling to relate his personal relevence to the story he is relating.Nevertheless (with
Trustpilot
Copyright © 2022 Thriftbooks.com Terms of Use | Privacy Policy | Do Not Sell My Personal Information | Cookie Preferences | Accessibility Statement
ThriftBooks® and the ThriftBooks® logo are registered trademarks of Thrift Books Global, LLC