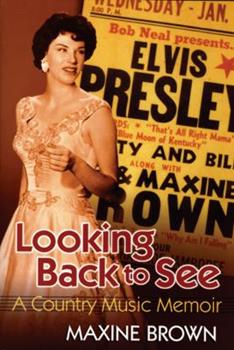 Looking Back to See: A Country Music Memoir

A vocal group without peer, The Browns were central artists in the changing sound of country and American popular music at mid-century. They were part of major changes in the entertainment business and American culture, participated in the folk music movement in the '60's, and saw the steady birth of rock 'n' roll up close as they worked with Presley and others. Illustrated with many never-before-published photographs, Looking Back to See is a remarkable...

I love it in Australia too

Published by Thriftbooks.com User , 16 years ago
Maxine Brown was part of a family country band with her brother, Jim Ed and sister, Bonnie. Their most famous recording is that of Edith Piaf's `The Three Bells'. She writes about her early family life growing up in rural south Arkansas during the Depression. Her journey in country music and the people with whom she traveled and the songs she wrote. The people she met and performed with such as Jim Reeves, Johnny Cash, Patsy Cline and Chet Atkins. Performing on the Louisiana Hayride, at The Grand Old Opry and touring Europe. Particularly touching was the story about Jim Reeves' tragic death. It bought a new reality to his life for me. I particularly enjoyed her stories of their encounters with Elvis Presley and how he fell in love with Bonnie and asked her to marry him. She turned him down. One particular incident was at the time of his discharge from the army when he called a press conference and invited the Browns to attend. He asked Bonnie did she wait for him and she told him `no', she was married and expecting a baby. She must have known what would have been ahead. I absolutely loved reading this book and did it in 3 days. I love country music and it is also takes a look at the background of some of the great American country performers and the people involved with their careers. Here in Australia we only see the end result of some the greats and have no idea what life was like for budding country singers in America. I found this book while listening to WSM America's Country Music Station broadcast live from The Grand Old Opry. There was a live interview with Maxine promoting the book. Thank you Maxine, for the experience.

Published by Thriftbooks.com User , 17 years ago
Kudos to Maxine Brown for her fascinating no-holds-barred look at the country music industry of the 1950's and 1960's. Maxine, along with sister Bonnie and brother Jim Ed, were legendary country group The Browns, who chalked a number of hits for fifteen years, notably THE THREE BELLS, one of the biggest hits in country music history and as well as a number one pop hit for them. The Browns were all but ready to throw in the towel when they scored that monster hit. Their RCA recordings were not producing major hits. The group earlier came to success on the small Fabor Records label founded by one Fabor Robinson. Like many vocalists on small labels during the era, according to Maxine, the Browns "never made a dime" on their hit LOOKING BACK TO SEE, needless to say she has harsh feelings for Robinson "probably the sorriest b****rd then infesting the industry." She recalls a string of horrors the Browns had to put up with due to the association, so much so Robert Cochran, in the book's introduction feels to need to note country musican historian Colin Escott found similar stories from other Robinson associates in his research. Maxine titles one of her chapters "We Get Screwed" and her tales of blackmail attempts to harassment are truly astonishing. There's lots of good times too, from dozens of close friends in the industry from Elvis Presley to George Jones and their years as the leading country vocal group. The Browns were especially close to Jim Reeves, and like Reeves they suffered from some backlash in some country circles because of their pop hits. Maxine recalls a run-in she had with Little Jimmy Dickens at a country music function during the peak of the Browns' crossover success when Dickens strolled up to them and said "What are you doing here? You Ain't country." As you might have guessed Maxine is not the type to just stand there and take that, calling him a "sawed-off son of a b***ch" which broke into a cuss fest that led to Maxine and Dickens not being on speaking terms for years although she happily notes they have since made amends. After the Browns disband in the late 1960's and brother Jim Ed becomes a popular male star, Maxine found it difficult to launch a solo career (I personally love her only solo album SUGAR CANE COUNTY) and is surprised how quickly the industry seems to have forgotten she was one third of the hottest group in country music. Happily, the Browns have frequently reunited for concerts since the late 1980's and still perform today. LOOKING BACK TO SEE is a great read, loaded with rare photos. Maxine writes in a friendly, talkative style and as you might guess, is as blunt as someone having an intimate conversation. This is a fairly large book - 348 pages - for a country star autobiography. The University of Arkansas (Maxine's home state and where she still lives) published this book and did a fine job with it. It's clear a local press is the way to go for country music star's of the past who mi

This should be made into a movie!

Published by Thriftbooks.com User , 17 years ago
This book was one of the best biographies I've ever read. I've read many of them and this one was the hardest for me to put down at night. I'm only 25 years old and wasn't around when the Browns were making hits, but this was so good it felt like I was around to witness it myself. Maxine has such a beautiful way with words (being a great songwriter) that the book did more than just tell her life story, it was a beautiful story. I highly recommend this book to anyone who enjoys country music or biographies in general!

Published by Thriftbooks.com User , 17 years ago
I have always enjoyed the Browns' beautiful music. I remember when the trio broke up so they could raise their families. But I could never have imagined the pain and financial hardship associated the decision. It's also hard to comprehend how such hitmakers could be broke, but it seems to have been a common occurrence in those days. The more biographies I read, the more I realize the importance of strong management--and honest management. Maxine tells a great how-it-was story in a tone that's easy to follow and sympathize with. The only problem I had with the book was the confusing chronology. She jumped back and forth without letting the reader know what year she was in. Other than that, it was an enjoyable and illuminating story.

TWO BOOKS IN ONE

Published by Thriftbooks.com User , 17 years ago
This is really two books in one! Maxine Brown's story not only reveals facts about the somewhat complex atomosphere found in the country music community; there are also bits resembling Steinbeck's "THE GRAPES OF WRATH", when she shares her memories of growing up in depression stricken Arkansas. THE BROWNS (Jim Ed, Maxine and Bonnie) will always be considered high-marquee when the subject of perfect harmony is presented. Similar to the MILLS BROTHERS, THE ANDREWS SISTERS, THE AMES BROTHERS and other super-sounding family groups ... it's in the blood! They have been complimenting the country music scene for over 50 years. However, the styling of THE BROWNS is recognized in the "pop", "gospel", "folk" formats... anywhere good music is appreciated. When they were at their peak, their music "crossed over" into the "pop" charts ... as well as "country". And when it comes to "gospel", they are unbeatable. THE BROWNS' rendition of "The Three Bells" is still considered a masterpiece, as are other "top-of-the-charts" titles. In this very informative and enjoyable book, Maxine Brown pulls no punches while describing the "good breaks" and the "tough valleys" found in the unpredictable side-roads of country music. You name 'em, she knew 'em. Johnny Cash, Elvis Presley, Jim Reeves ... and many other top names in entertainment were very close to the author, and she doesn't hold back her feelings toward those folks in the 300-plus pages found here I might add: you don't have to be a fan of country music to enjoy "LOOKING BACK TO SEE" ... also the title of THE BROWNS' first hit in 1954 when Maxine and her brother, Jim Ed, were struggling for that first break. Sister Bonnie joined them in 1955, adding to the importance of this top-drawer act. Adding to the enjoyment are plenty of photos. -Bill Mack
Trustpilot
Copyright © 2022 Thriftbooks.com Terms of Use | Privacy Policy | Do Not Sell My Personal Information | Cookie Preferences | Accessibility Statement
ThriftBooks® and the ThriftBooks® logo are registered trademarks of Thrift Books Global, LLC