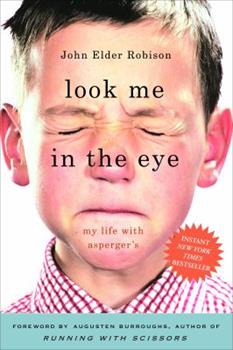 Look Me in the Eye: My Life with Asperger's

Ever since he was small, John Robison had longed to connect with other people, but by the time he was a teenager, his odd habits-an inclination to blurt out non sequiturs, avoid eye contact, dismantle radios, and dig five-foot holes (and stick his younger brother in them)-had earned him the label "social deviant." No guidance came from his mother, who conversed with light fixtures, or his father, who spent evenings pickling himself in sherry. It was...

Published by Buffy , 12 months ago
Funny, honest and surprising, this memior gave my family new perspectives on life. It is a must-read for anyone with a "differently-wired" loved one. And these days, that's just about everyone.

I absolutely love this book!

Published by V , 1 year ago
I’m not one to reread books by any means, but I’ve probably read this book about 5 times. I originally read it in high school, where I feel absolutely In love with John Elder Robinson! He is honest and a great author! I recommend this to anyone who wants to know more about asperger’s or just how human minds can differ from one another. If you work at all with any special needs children or adults, this a great book for you! 5/5 stars every time!!

Viewing the World Through Aspergerian Eyes

Published by Thriftbooks.com User , 15 years ago
People who suffer from Asperger's Syndrome view the world through very different eyes than do normal people. Things that seem perfectly mundane to normals take on a whole new appearance when someone with Asperger's looks at them. Aspergians (a term coined by Robison) do not pick up on the social cues and body language other people do. They don't think things that most people peceive as important matter; and things they believe are of vital importance are seen as inconsequential by normals. Think for a minute about the sound of nails on a chalkboard. To many normals, the sound is something to make you grit your teeth and wish for its absence. To Aspergians, the sound can range from absolutely intolerable to pleasant, depending on how their particular affect of the syndrome perceives it. This difference in perception is one reason it's so hard for Aspergians to relate to the world. John Elder Robison has given us a solid look at what it's like to be an Aspergian. He points out that the syndrome gives as well as takes. Although he had a difficult time as a child and adolescent only partly due to his Asperger's (he was afflicted with a pair of nutcase parents, which is the last thing anyone with Asperger's needs), his gifts for 'hearing' a sound and then being able to construct devices to make that sound a reality gave him successful careers as a tech wizard working with the sound systems and instruments of the rock group KISS, among others; and a successful career (as defined by the mundanes) as an engineer for Parker Brothers in the very early days of electronic games and early game consoles. His current career as a master restorer of classic cars also is due in part to the way his Asperger's causes him to see the world; like many other Aspergians, he relates much better to machines than he does to people because machines are logical and do not deliberately set out to hurt you. Thinking back to your school days, I am sure you will remember the weirdo who was hopelessly awkward, who had no social graces and few if any friends, but who was incredibly gifted with one subject or non-sports-related activity in or outside school. I'm also sure you'll recall (if you are honest about it) how that kid was tormented for his awkwardness, gracelessness, and inability to fit in. Chances are you were dealing with an Aspergian, who had no more of a clue of how socialization and perception works than you did about why he was the pink monkey in a cage full of brown monkeys in the jungle that is childhood and adolescence. Thanks to Robison, you now have some idea of what life was like for that kid, and why he was the way he was, and what life is like when you're the one who has Asperger's.

Published by Thriftbooks.com User , 15 years ago
In the course of running my web site and support forums, OASIS (Online Asperger Syndrome Information and Support) I'm continually asked by vistors and forum members to recommend books. It's been a pleasure to suggest LOOK ME IN THE EYE. I'll be honest, after 15 years of running OASIS, I sometimes find it difficult to convince myself to sit down and read yet again another book on Asperger Syndrome. But in this case, I opened the book and couldn't stop reading. I did judge a book by it's cover (the cover photo is wonderful, too) and was glad I did. In addition to providing insight into growing up with AS, he is, over and above all, an absolutely wonderful storyteller! I was also pleasantly surprised to read his recommendations section in which he mentioned OASIS and our book, THE OASIS GUIDE TO ASPERGER SYNDROME, and indicated that he found both helpful to him. I'm happy that I was able to help the author and even happier that by sharing his story he'll be helping many more AS individuals and their families. Thanks for a great read! Barb Kirby OASIS

Published by Thriftbooks.com User , 15 years ago
Great book! I have a daughter diagnosed with Aspberger's Syndrome so it does run in the family. Another daughter is undergoing the diagnostic process to see if she is "on spectrum." Reading Look Me in the Eye: My Life with Aspberger's was a cathartic experience, as I glimpsed into how Aspies or Aspergians think. Now, I can better understand how to help my daughter make life choices. Of course the title is apt because I have uttered similar phrases until I found out that my daughter could not (not would not) look me directly in the eye. For any parent, or anyone wanting to learn more about Asperger's Syndrome, this book is a must read along with books by Drs. Tony Attwood and Temple Grandin (Grandin is diagnosed with High Functioning Autism (HFA) which has similar characteristics to Aspberger's Syndrome.)

A Satisfying and Thought-Provoking Memoir

Published by Thriftbooks.com User , 15 years ago
I bought Look Me in the Eye: My Life with Asperger's by John Elder Robison mainly because I was enticed by reviews and interviews to explore the mind of someone who (because of Asperger's Syndrome) thinks a bit differently from us so-called "regular" folks. The book centers on John's struggle to become socially and economically successful as a person with Asperger's Syndrome. His condition wasn't diagnosed until he turned 40. The two main things about this book that stood out for me (from beginning to end) were: (1) Mr. Robison doesn't give many clues about how he expects the reader to react to his stories. In other words, you get to make your own judgments - whether about his legal and illegal pranks or about his decision to not get involved with groupies (for two examples). He doesn't spend much time defending his behavior and he isn't dogmatic about what's right and what's wrong. (2) He thinks a lot and in unusual ways. As I read about his sometimes-elaborate thought processes, I remembered what a friend told me long ago: "If you're confused, good! It means you're thinking!" And I pondered some of the social conflicts in my own life caused by what others have characterized as "thinking too much." In chapter 26 "Units One Through Three," Mr. Robison hilariously describes in frank terms the thought processes he went through when choosing his wife. ("Choosing" isn't the right word, but I promised myself I wouldn't write any spoilers into my review.) Here's a short sample from the book, from chapter 26, about his logic concerning choosing a wife: "Unfortunately, when picking a mate from a set of three sisters, it is usually necessary to establish a relationship with one in order to meet the other two. That usually precludes a person from selecting a different sister once an initial choice has been made." Though I ultimately found "Look Me in the Eye" to be a satisfying and often funny book, it didn't fully capture my interest until the author began vividly describing a major prank (performed during his teenage years) related to fire. From there on (through many chapters) until he finishes talking about his work with rock and roll bands (which included creating pyrotechnically flamboyant guitars for KISS), I was utterly captivated by Mr. Robison's exciting stories. The chapters after that point aren't bad either. Yes, Mr. Robison does think somewhat differently. He demonstrates an inspiring, practical approach to dealing with some of life's challenges. With his book, he managed to place those challenges under a microscope for all to see. I recommend that you take a look.

Published by Thriftbooks.com User , 15 years ago
This book was a rare delight to read. John Robison has a warm and gentle giant persona that makes Look Me in the Eye completely enjoyable. From the first page, you will feel as though he's just invited you to pull up a chair next to him. I believe his story and the individual struggles he has faced and overcome as an Aspergian are heart-rending and will surely speak to the masses. I've not only recommended it to others, I bought half a dozen copies for friends and family.
Trustpilot
Copyright © 2022 Thriftbooks.com Terms of Use | Privacy Policy | Do Not Sell or Share My Personal Information | Accessibility Statement
ThriftBooks® and the ThriftBooks® logo are registered trademarks of Thrift Books Global, LLC