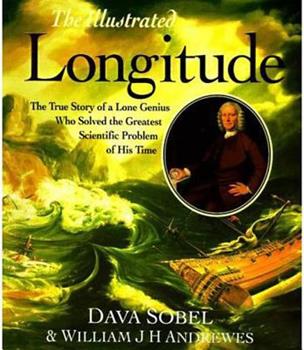 The Illustrated Longitude: The True Story of a Lone Genius Who Solved the Greatest Scientific Problem of His Time

A fully illustrated edition of the international best-seller "Longitude.""The Illustrated Longitude" recounts in words and images the epic quest to solve the greatest scientific problem of the eighteenth and three prior centuries: determining how a captain could pinpoint his ship's location at sea. All too often throughout the ages of exploration, voyages ended in disaster when crew and cargo were either lost at sea or destroyed upon the rocks of...

Published by Thriftbooks.com User , 20 years ago
John Harrison (1693-1776) spent his lifetime inventing and perfecting a series of timepieces to measure longitude. As Dava Sobel relates in her engaging narrative, "Longitude," until the 18th century sailors navigated by following parallels of latitude and roughly estimating distance traveled east or west. Ships routinely missed their destinations, often taking excessive time to arrive or succumbing to reefs off fogbound shores. Thousands of sailors and tons of cargo were lost.In 1714, England's Parliament offered £20,000 (the equivalent of about $12 million today) to anyone who provided a "practicable and useful" means of determining longitude. Countless solutions were suggested, some bizarre, some impractical, some workable only on land and others far too complex.Most astronomers believed the answer lay in the sky, but Harrison, a clockmaker, imagined a mechanical solution--a clock that would keep precise time at sea. By knowing the exact times at the Greenwich meridian and at a ship's position, one could find longitude by calculating the time difference. However, most scientists, including Isaac Newton, discounted a clock because there were too many variables at sea. Changes in temperature, air pressure, humidity and gravity would surely render a watch inaccurate.Harrison persisted. As Dava Sobel writes, he worked on his timepiece for decades, though he suffered skepticism and ridicule. Even after completing his timepiece, an instrument we now call a chronometer, in 1759, he underwent a long series of unfair trials and demonstrations. Ultimately he triumphed.Sobel, a science writer who contributes to Audubon, Life, Omni and other magazines, captures John Harrison's extraordinary character: brilliant, persevering and heroic in the face of adversity. He is a man you won't forget.

The Origin of the Phase--Promise you the Moon

Published by Thriftbooks.com User , 21 years ago
. ******************************** A nicely illustrated, and short but a fascinating book on the story of finding a solution to the problem of establishing longitude at sea. Establishing latitude is relatively easy; one simply measures the angle the sun makes to the horizon. The problem of longitude eluded mankind for ages. In 1714, the British government posted a prize for the first man to develop an accurate and reliable means of establishing longitude at sea. This started one of the most important technological races in history. On one side were the astronomers who believed that the answer lay in the heavens. On the other one man who felt he could develop an accurate timepiece. The author relates some of the horrify miscalculations that resulted in ships being unable to establish their positions accurately. In one example, Admiral Sir Clowdisly Shovell's fleet of five ships were returning from Gibraltar when four of his five ships struck the rocks of the Scilly Islands with a loss of over two thousand men. This was one of literally hundreds of horrifying instances, where ships were lost because they lacked information on their longitude. Then need for a mean of establishing longitude was critical. Galileo found a method for determining longitude, using the Jovian moons that worked well on land, but not on the unsteady platform of a ship at sea. He did however, pave the way for astronomers that followed. These eventually found a way to find position based on the motions of the moon. This method was extremely complicated and time-consuming. The research for a means to find longitude using the Moon took longer than expected and ultimately proved to be impractical for use at sea. In the meantime, a genius of a man, John Harrison, refined the timepiece, a method out of favor politically, because Sir Isaac Newton and Edmund Halley dismissed this as a practical means. Unfortunately, the astronomers that followed continued to support this view. Harrison single-handedly found a means of establishing Longitude by developing an accurate timepiece that could maintain it's accuracy and withstand the variations of temperature, humidity, and shock. This book is primarily about Harrison and his efforts to develop an accurate timepiece, which ultimately proved successful. Later other timepieces followed created by other men who perfected mass-production of these timepieces. The story of Harrison is a magnificent triumph of a single man who stubbornly held fast to his beliefs and succeeded in accomplishing his goal in a lifetime. If you are a navigator, and interested in celestial navigation this is a must read book. If you love history, you will love this book. A book worthy of a prominent place on your bookshelf.

Published by Thriftbooks.com User , 22 years ago
Dava Sobel has written a beautiful book about a subject that in a lesser author's hands could have been exceedingly boring. The need for a clock which would accurately keep time while on a sea voyage in order to help mariners determine their longitude and thus accurately determine where they would land doesn't seem like it would be that exciting. However, Sobel has given a wonderful account of the problems that were encountered without this device and how John Harrison, a clock maker, was determine to solve this problem with an accurate time piece that could be used even on ships. The tremendous difficulties that Harrison had in convincing the British government authorities that he had indeed solved the problem are interesting and yet his endurance in solving this problem is almost heroic. Apparently, red tape and professional jealously are timeless qualities of human nature. This slim book provides an interesting glance into a subject which probably few have ever thought about. I would recommend this book highly to anyone who likes to know the story behind scientific discoveries which now seem almost quaint

Lucky us that it was Dava Sobel

Published by Thriftbooks.com User , 22 years ago
It's wonderful when just the right writer takes on a subject of particular interest to me. Dava Sobel, in her lean, crisp, yet penetrating style, captures the history of the development of that critical instrument -- the chronograph for mariners. How many ships, how many lives were saved by this one achievement? Dava told the story just right, in my opinion.Not surprisingly, John Harrison learned that there was political finagling to contend with back then, as there is now. So his prize for solving the problem of keeping accurate time on ships wasn't as forthcoming as it should have been.Fans of O'Brian's Aubrey/Maturin series will love "Longitude", and rejoice that the invention came along before Aubrey and Maturin's voyages. Those two encountered enough slings and arrows without having to wonder where in the world they were.That old saw that claims "You can't tell a book . . ." is off the mark in this case. The designer of the jacket of Sobel's treasure was smack dab in harmony with the book.

Came Back to This One

Published by Thriftbooks.com User , 23 years ago
I had not read this book before, but the spate of great popular science writing and the success of books like Sobel's Galileo's Daughters, Johnson and Coates' Nabokov's Blues, and John Glenns memoirs especially as they recounted his pioneering space exploration brought me back to this book. Much like Glenn's book, its amazing you can take something as simple as figuring out how to draw a line on a map, or man's desire to put a man on the moon and end up with such fascinating accounts of man, his dreams, and the lengths he will risk to achieve them. Of course, Sobel is a great story teller and while Glenn's narratives are current enough for us all to "vibe" with them, Sobel has had to recreate a sense of the history and persons who people his book. Some people have liked this book more than Galileo's Daughter but they are really two different kinds of books. Longitude is a great retelling of a carefully researched "niche" in the history of man's quest for technological achievement while Galileo's story (much like Nabokov's) is the retelling a story from different point of view. This has been a great year for popular science writing.

Longitude: The True Story of a Lone Genius Who Solved the Greatest Scientific Problem of His Time Mentions in Our Blog 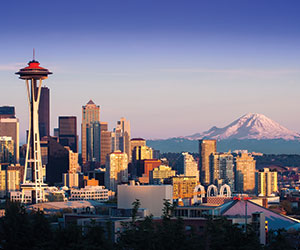 Place: Finding the Texture That Fits You
Published by Trevor Higbee • March 28, 2018

I've always loved the idea of place, but I haven't always known it.

I was born in the Seattle area. Then over the course of my young life, moved to Southern California, Dallas, Italy, Kazakhstan, China, Salt Lake, DC, Beijing, Houston, and finally, Seattle. While I understand there are many people who have lived and traveled a great deal more than me, I have done enough moving for myself that I have come to appreciate the idea of place.