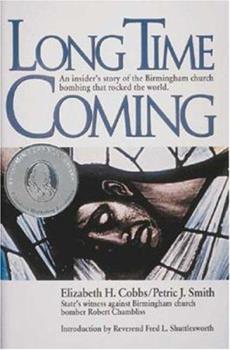 Presents an autobiographical account of a woman who, despite considerable danger to her life, testified against her uncle, Robert Chambliss, in a 1977 trial at which Chambliss was charged with the bombing of a Birmingham, Alabama, black church in 1963. This is also a story about Cobbs, her family, and the fear that Chambliss instilled in them.

Published by Thriftbooks.com User , 20 years ago
With another of the Birmingham bombers coming to trial this month for the killing of the four little girls, this book concerning the conviction of the first one is a page burner. Robert Chamblis' neice witnessed against and helped to convict him. In this book, she takes us behind the scenes of the KKK and the bombings and murders committed by the Cahaba Boys. I recommend this for anyone interested in the Civil Rights Struggle.
Trustpilot
Copyright © 2022 Thriftbooks.com Terms of Use | Privacy Policy | Do Not Sell or Share My Personal Information | Accessibility Statement
ThriftBooks® and the ThriftBooks® logo are registered trademarks of Thrift Books Global, LLC