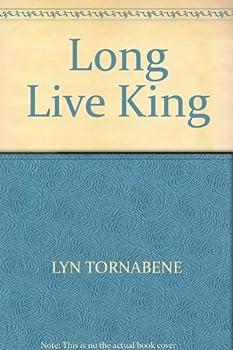 What distinguishes Long Live The King from most other biographies is the quality of research and depth of insight which penetrates the cloak of legend surrounding this complex, fascinating individual.... This description may be from another edition of this product.

Published by Thriftbooks.com User , 17 years ago
This is an excellent book, with perhaps the best word portrait of Lombard in existence, and with that portrait, one understands better the man Gable was after January 16, 1942. The text gives a well developed dimensional portrait of Gable that explores the darker sides of the man - and gives credible support to the Hollywood conviction that Carole Lombard died because of Gable's womanizing, specifically citing Lana Turner (Gable had just started work on 'Somewhere I'll Find You' with Turner when Lombard left on her war bond tour).

Nope, it ain't about Elvis

Published by Thriftbooks.com User , 21 years ago
Clark Gable was The King long before Elvis started shaking his booty and long before Elvis even had a booty to shake! It's refreshing, in this biography, to read what a humble man this gorgeous, virile man had. Far from being the Rhett Butler-egomaniac, Gable actually thought he wasn't "that good-looking!" "I'm just a lucky slob from Ohio," Gable is quoted in the book as telling an interviewer.Known largely for his on-stage role as Rhett Butler in Gone With the Wind, also starring Vivien Leigh -- and his off-screen romance with Carole Lombard, Gable wooed more women than he ever could have bedded, what with those "come hither" eyes and dimples. Every woman who watched Gone With the Wind would have changed places with Vivien in a second in the famous "rape" scene where he roughly sweeps Scarlett in his arms and carries the kicking and screaming wife up the stairs. Of course, anyone who knows anything about love, Scarlett and that movie knows it surely wasn't rape!Tornabene's book explores Gable's extreme professionalism as an actor and bits and pieces of the private life he chose to hide while alive. He was even described by the media as "boring" because he wouldn't talk about his private life!Interesting in the book is that this journalist decided to make a most humble move and talk to a pscyhologist about the research to gain a different view of Clark Gable, as research alone provided pieces to the Gable puzzle but not the entire picture.
Copyright © 2022 Thriftbooks.com Terms of Use | Privacy Policy | Do Not Sell My Personal Information | Accessibility Statement
ThriftBooks® and the ThriftBooks® logo are registered trademarks of Thrift Books Global, LLC