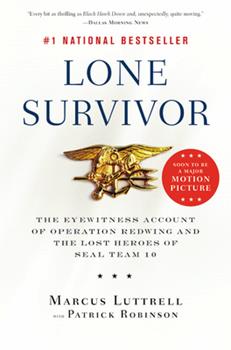 Lone Survivor: The Eyewitness Account of Operation Redwing and the Lost Heroes of SEAL Team 10

Follow along a Navy SEAL's firsthand account of American heroism during a secret military operation in Afghanistan in this true story of survival and difficult choices. On a clear night in late June 2005, four U.S. Navy SEALs left their base in northern Afghanistan for the mountainous Pakistani border. Their mission was to capture or kill a notorious al Qaeda leader known to be ensconced in a Taliban stronghold surrounded by a small but heavily armed...

Published by Elaine , 1 year ago
Marcus gives an in depth look at his journey to become a Navy SEAL & through BUD/S and his account of what happened to he & his 3 teammates (Murph, Axe, & Danny) during Operation Redwing in 2005. A gripping, detailed, and sad story about a war that is raging on still. Dropped off in Taliban territory to capture or kill an al queda leader was the team's mission. A harrowing journey into unknown territory and a battle that killed Marcus's three teammates & later a rescue/extract helicopter full of other teammates. Last man standing, Marcus was found by Pashtun leader & taken to their village & protected. This book was up close & personal and full of honor for his fallen hero comrades and a tale of hope and perseverance. If you've seen the movie, you need to read the book

Published by mill , 1 year ago
I saw him out at the FBI Academy a few years ago, great read.

Way too drawn out

Published by Kim , 1 year ago
It took me a long time to finish this book. It’s unnecessarily drawn out and I had to skim through much of it. At several moments, I wanted to put it down forever but I powered through.

Such a great read

Published by Anonymous , 1 year ago
Recommend 10/10

Published by Thriftbooks.com User , 14 years ago
Lone Survivor is one of those books that you will either get, or you will not get. Retired Navy Seal Marcus Luttrell and British author Patrick Robinson have given us a spellbinding account of a Navy Seal mission in the mountains of Afghanistan in which 3 of Marcus' team members lost their lives. The minute-by-heart pounding-minute account of their ordeal will either grab you in the gut and make you thank God for the United States of Amercia, or you'll come away scratching your head wondering what the fuss is all about. Because I am an ex-serviceman, I understand the warrior ethos with which the SEALs, and other special-forces type soldiers like them operate by. Luttrell is not shy about sharing his views about how those in the media, academia, and in politics have so much to say about "human rights" and "rules of engagement," without realizing what the stakes are on the battlefield. Far from being "trigger happy Rambo-types," the account Luttrell and Robinson portray the SEALs in Lone Survior is of a group of men who are, at the core, deeply moral, patriotic men driven by love of God and country, not blood-lust. Their deliberation on whether or not to execute the goatherders brought me to tears. It is easy for those of us who have never experienced war, being shot at,having our lives threatened by hostile action, etc. to say what we would or would not do in certain situations. But the fact remains that the Navy SEALS are highly trained combat specialists, mentally and physically, and those brave men who stories are told in Lone Survivor are owed a debt of gratitude from a nation who remains free because of their sacrifice.

Published by Thriftbooks.com User , 15 years ago
Right before I bought this book, I heard all the promotional "buzz" and "word of mouth" associated with it. When I started reading it, after the first 60-70 pages, which were kind of boring, I was saying to myself, "woe, were they really talking about this book, it's kind of boring!" Then we got to Navy Seal training. Ladies and Gentlemen, (Future readers.) I recommend you fasten your seat belts, fasten your chest harness, and it probably is good advice, to put a pillow behind your neck to protect you from whiplash! This story, then rockets non-stop for the next 320 pages. I'm a U.S. Veteran, and I thought my basic training was pretty tough. But after reading this book, I realize, I probably wasn't in basic training, I was on some kind of holiday, and instead of cussing out my drill instructor every night, I should have been sending him candy and flowers. Basic Seal training is tough, but they're just getting warmed up with some basics, such as: "they just bound our ankles together and then bound our wrists together behind our backs and shoved us into the deep end (Of the pool). This caused a certain amount of panic, but our instructions were clear: Take a huge gulp of air and drop to the bottom of the pool in the standing position. Hold it there for at least a minute, bob up for new air, then drop back down for another minute, or more if you could." All along the way, the instructors are declaring that most of the potential Seals won't be here at graduation, they'll either be thrown out, or quit. (Note: Only 30 of the original 180 made it!) A number of these highly motivated seamen dropped out during basic Seal training, and now.. And now... we get to "HELL WEEK"! I will attempt to briefly summarize "Hell Week" for you. What these cream of the crop, young American men, are put through, is hard to fathom. It is past inhumane. I'm surprised some politically correct ACLU representative isn't present, suing the Navy, but this is the only way to train the "best of the best"! And it's this training, that probably saved Marcus's life, in his ordeal in Afghanistan. 0500. "Give me 20 pushups! Go run into the freezing ocean in combat boots and fatigues. Get out of the ocean and roll around in the sand. (This will be referred to from here on out as getting "wet and sandy"!) Give me 20 more pushups. Now go on a multi-mile run down the beach, in soft or wet sand, with a million sand particles in your combat boots, and stuck in every crevice of your body, thereby acting like the most abrasive sand paper you'll ever have administered to your body. Oh you want to eat breakfast, well jump back in the freezing ocean, get out of the ocean, roll around in the sand (Getting "wet and sandy") run the couple of miles back (all in an accepted maximum time, or you're out of the Seals!) Give me 20 pushups! Now you can eat. Now pickup a log the size of a telephone pole. Run into the same aforementioned ocean (While still carrying the log!) Come out of the ocean. Get "wet a

Published by Thriftbooks.com User , 15 years ago
Apparently some people are upset because Luttrell has an opinion and some attitude. I'll let you in on a little known secret...one does not survive any severe challenge without strong opinions and attitude. It is part of the man, therefore a required part of "his" story. Even if you still have your John Kerry bumper sticker still super-glued to your car and you truly believe in the vast right-wing conspiracy, you should buy this book for what it is, an amazing (and true) story and a great read. Stop pushing the liberal or conservative agenda for awhile and just be an appreciative American. Luttrell is the real deal.

Published by Thriftbooks.com User , 15 years ago
This book is a compelling, easy read that you will find hard to put down. The first part takes you through SEAL training in Coronado, CA and gives you a deep appreciation for just how hard it is to become a SEAL, while the second half takes you through a harrowing battle that in many ways validates just why the SEAL selection and training process is so difficult and so effective. The battle sequence in Afghanistan and its aftermath is incredibly intense . The best screen writer in Hollywood couldn't have dreamt up something more intense, moving, and awe inspiring. If they make it into a movie it will in some ways be like a Afghani inspired version of Full Metal Jacket. Reading this fills one with humility and gratitude for the sacrifice that all the members of our armed services make on our behalf, but especially for the men of the SEAL teams. All I can say is that I am very glad they are on our side. As an aside, if you enjoy books like this you should check out Bravo Two Zero by Andy McNab, an SAS operative who served in the first Iraq war. I found it highly ironic that in both cases great misfortune results from acts of human mercy that elite soldiers felt compelled to take despite the clear risk it posed to their own lives. These books should be required reading for anyone who questions the character and moral fiber of such brave men.

Published by Thriftbooks.com User , 15 years ago
This book takes you inside the Navy SEALs training program in Coronado. You are with Marcus Luttrell throughout BUD/S and Hell Week. You fly with him and his teammates in a C-130 to the Hindu Kush, where the hunt begins for bin Laden's right-hand man. But then it all goes terribly wrong, up there in the mountains of Afghanistan. This book, written by Patrick Robinson, reads like a fast-paced thriller, told in Marcus's understated voice. It is a rivetting, important, sad story of lost friends, valor, courage and the intricacies of modern war. It is an important book, destined to become an American classic.
Trustpilot
Copyright © 2022 Thriftbooks.com Terms of Use | Privacy Policy | Do Not Sell or Share My Personal Information | Accessibility Statement
ThriftBooks® and the ThriftBooks® logo are registered trademarks of Thrift Books Global, LLC