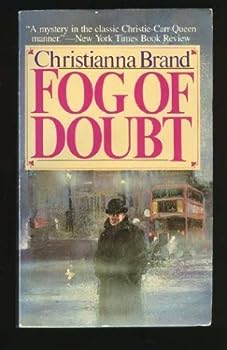 (Book #5 in the Inspector Cockrill Series)

Rosie, the naughty little nyphet around whom Christianna Brand weaves her witty and mysterious web, recounts to her family a series of fibs that results in their supposing the unfortunate suitor, Raoul Vernet, to be her base seducer. On a night of dense London fog, with everyone alibied, Raoul is discovered having been hit over the head with a blunt instrument.

Published by Thriftbooks.com User , 13 years ago
OG OF DOUBT is, Christianna Brand states, her own favorite of all of her novels, and its amazing construction sets up seven suspects all in a row, positions each one as the killer, then eliminates them one by one till none are left. (The dotty grandmother likens their situation to the notorious Ten Little N-word nursery rhyme is a passage we can no longer cite.) Then one of the seven emerges, the impossibility overcome, and Cockrill has solved yet another case. The reader has to visualize the floor plan of two very different houses, for the solution depends on being able to "see" what is happening in both, and not just the floor plan but a good 3-D working knowledge of upstairs, downstairs, on the stairs, and what's outside the windows of each house. Each belongs to a doctor: in one, lonely bachelor Ted Edwards ("Tedward") keeps his office and moons over the lovely, Rose Birkett-like Rosie Evans, recently returned from a finishing school on the Continent and secretly pregnant with a mystery baby. In the other, Rosie lives and sulks and plans an abortion, while her staid older brother, Dr. Thomas Evans, may be the only character in the book from whom her pregnancy is a secret. His wife, Matilda, is busy with her own housekeeping and the care of a two year old, Emma; his grandmother, the dotty one, throws furniture from the windows and gets lost in the bodice-ripping Valentino silents of her youth; a sort of secretary, Melissa Weeks, lives in the basement mooning over men; and nearby a communist organizer, Damien Jones, wants to do the right thing by the errant, blowsy Rosie. When an unexpected visitor from Europe arrives, on rhe night of the worst fog in ages (a "London particular," which Brand used for the UK title of the novel), a bloody der occurs in the family's midst--and no one, oddly enough, hears a sound... I didn't really "buy" that in this one, Cockie is supposed to be a friend of the family. His friendship never seems convincing and they never explain how any of them came to know him. And, as the plot wears on, and one suspect after another becomes first the top suspect, then gets eliminated, the story presently turns on Brand's less appealing characters, so the second half of the book has its longueurs. But on the whole FOG OF DOUBT is amazing, and some of its characters will live forever for their humor, charm, and valiant efforts to make sense of a suddenly violent world. Matilda Evans in particular anticipates Celia Fremlin's trademark harried wives and mothers, lives poised in an eternal and uneasy balance between tragedy and comedy; she might well be the mother of Lady Lydia Timms, the irrepressible housewife heroine of Peter Dickinson's classic THE LIVELY DEAD (1975).

Published by Thriftbooks.com User , 13 years ago
Although not the greatest mystery novel ever, Fog of Doubt (originally called London Particular) is a treat for puzzlers who really like to try to figure things out - not only is the last sentence an ultimate revelation, but there is also another major clue which does not reveal itself as a clue until the book is over. I'll say no more than that.

Published by Thriftbooks.com User , 13 years ago
A genuinely underrated writer, Brand had a wit and bite to her prose that made her quite distinctive among her peers. She was critical in a genuinely challenging and distinctive way. This is one of her best books, and is a nice play on the traditional "a country house with a bunch of Brits isolated and one's the murderer" thing. It's main flaw is that Brand had one formula, and exercised it to death -- if you've read more than one of her books you'll always guess the bad guy, as the device always works out the same way. Still, if you haven't read any, this is a great place to start and will no doubt seem eminently surprising. Plus, even if you know whodunit, exactly how it worked is very clever -- one of the rare stories where the last line really does make a difference. When you finish it, you'll realize how wonderfully you were fooled.

This is Ms. Brand's personal favourite!

Published by Thriftbooks.com User , 14 years ago
Ms. Christianna Brand was quite vocal in describing this particular book as her favourite of all the books she had written. It is an extremely complex mystery, that is very ingeniously plotted. And you do not find out what actually happened until the very end. The murder was set in the middle of a real English fog, and that prevailing atmosphere penetrates througout the book. Everyone, and I mean everyone is conveniently alibied, and it is difficult for even Cockie to figure out how it was done. The book is very tricky, and you have to be on your toes as you read it. The list of suspects is small, and the plot is as tight as it gets. This is a really good book.

Published by Thriftbooks.com User , 23 years ago
On re-reading after many years, this should be 5 stars, not 4! This is a tour-de-force, with the "modus operandi" revealed in the very last line of the book. A master of the classic detective story with stricly defined and adhered to limits, Brand is at the same time an original. There is no other writer like her . The book suffers somewhat in the middle as to clarity, but, believe me, this is a plotter (and a device) of the first order. Second only to her GREEN FOR DANGER and better than the best of many others.
Copyright © 2020 Thriftbooks.com Terms of Use | Privacy Policy | Do Not Sell My Personal Information | Accessibility Statement
ThriftBooks® and the ThriftBooks® logo are registered trademarks of Thrift Books Global, LLC