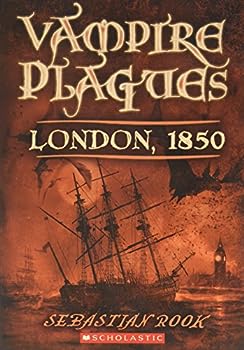 (Book #1 in the Vampire Plagues Series)

Twelve-year-old Jack Harkett is a street urchin living on the London docks. So when a merchant ship sails into port at twilight, Jack recognizes it for what it is: an opportunity. But Jack has never... This description may be from another edition of this product.

My Favorite In the Series

Published by Thriftbooks.com User , 15 years ago
All of these books have been good, but in my opinion, the first in the Vampire Plagues is the best. It introduces our characters Ben, Jack, and Emily. Ben and Emily are from a well-to-do family, but when their father dies and Ben only just survives, he comes back home and befriends Jack, who decides to help him vanquish the evil Vampire god Camazotz. It was exciting and clever, and altogether a great read!

Published by Thriftbooks.com User , 16 years ago
This is the first of the Vampire Plagues triology. To get the best excitement of it all, read this one first. You will not be able to put this book down.

Published by Thriftbooks.com User , 16 years ago
I can't believe that more people aren't connecting with this book. I work with fifth grade students and we just finished reading this as a class. If you want kids to learn the joy of reading, you need to give this one a try.

Published by Thriftbooks.com User , 16 years ago
The year is 1850, and twelve-year-old Jack Harkett has always lived on his own on the London docks, picking pockets in order to survive. He has no memories of a home or a family. One dark night, a ship sails into port. Jack hopes to steal some money from the rich passengers. But this ship is nearly deserted, and a swarm of bats emerges from it and flies off into the night. The only living human is a young boy named Benedict Cole. Ben is around Jack's age, but from a wealthy family. Ben has just returned from Mexico, where he had gone with his father, an anthropologist, on an expedition in the jungle to study Mayan ruins. But the expedition went horribly wrong when its leader, Sir Donald Finlay, was possessed by the Mayan vampire bat god, Camazotz. Now Sir Donald has returned to England with Camazotz's army of vampire bats, and unleashed them upon unsuspecting London. Jack, Ben, and Ben's older sister Emily, decide they are the only ones who can stop the vampires, and set out to do so against the odds. I love historical fiction as well as thrillers so I really enjoyed this book, a vampire story set in Victorian London. The characters will appeal to kids and the book is age appropriate for middle schoolers, but the unique mythology of the vampires and the exciting story may appeal to older readers as well. This book was a real page-turner, and I'm definitely looking forward to reading the other two books in this trilogy.

A Page Turner for All Ages

Published by Thriftbooks.com User , 16 years ago
12 year old Jack Harkett was looking to pick pockets on the night he witnessed a large ship pulling into the docks of 1850s era London. To his surprise, only one passenger, a tall, dark, gentlemen disembarked the vessel and disappeared into the night. Just as Jack prepared to board the ship in order to explore, a boy about his age who was visibly starved, tired, and rich based on the clothes (now tattered) he wore, stumbled off the boat. Jack befriends Ben (said boy) and listens his tale of the horrors that happened on his expedition to Mexico, the key part being that a Mayan vampire god (Camazotz) boarded the ship home is now on the loose in London with a swarm of bats/vamps to do his bidding. Jack, Ben, and Ben's sister Emily must work together to stop Camazotz from turning all of London into his meals, or worse, his vampiric minions. While clearly geared for the younger set of readers, I still found this novel to be very entertaining. The writing style is not by any means complex, but it isn't annoyingly simple and fluffy either. A good stock of vocabulary is used, and some of the dark moments were so chilling that I myself got a slight case of the goose bumps (and I am not easily scared). The characters are exceptionally round for a young novel. The vampire mythology deviates from the norm, you wont find any stakes, garlic, or holy water in this novel. Also gone is the sensual/sexual aspect that most vampire works tend to contain, making this book not only more tangible for the younger crowd, but it is also a breath of fresh air. Adults, however, have no fear, this book still proves to be a good, page turning read (it is not so fluffy as one would think...it is about vampires after all!) Adults will take interest on a new spin of the classic vampire tales and as I stated before, the dark parts are certainly satisfying. If you love vampires, love horrors, or just love to read, this book is definitely worth a look, it wont disappoint.
Copyright © 2022 Thriftbooks.com Terms of Use | Privacy Policy | Do Not Sell My Personal Information | Accessibility Statement
ThriftBooks® and the ThriftBooks® logo are registered trademarks of Thrift Books Global, LLC