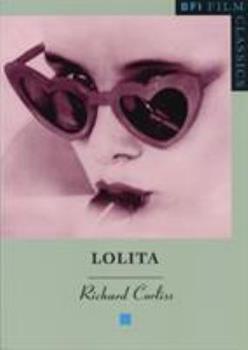 Stanley Kubrick's version of Vladimir Nabokov's novel was one of the most controversial films of the 1960s. This analysis is written by Richard Corliss, editor of Film Comment . It features a brief production history and a detailed filmography.

Published by Thriftbooks.com User , 20 years ago
Stanley Kubrick's 1962 'Lolita' is unusual among the 360 films chosen by the British Film Institute as Classics in that it is not really a 'classic' at all, if we mean by that term a flawless work of art that transcends its time and culture, and is open to new readings from succeeding generations. 'Lolita' is considered an entertaining compromise, a film that cannot be called a true interpretation of Nabokov's notorious novel about a middle-aged Professor's rapturous lust for a prepubescent girl, because of censorship restrictions and the impossibility of capturing the book's essence on screen, it's narrative voice.Richard Corliss doesn't try to counter critical consensus, concluding, after listing all the ways it fudges Nabokov, that 'Lolita' is 'a very good film', damning faint praise for a director usually spoken of in reverent superlatives. Corliss argues that 'Lolita' came too early for a still-young Kubrick who, a couple of years later in an increasingly liberal decade, might have made a freer, truer adaptation. Nevertheless, he sees Lolita as crucial in Kubrick's development, a signpost towards an aesthetic integrity away from the compromises of his last film, 'Spartacus'.Corliss' monograph is a highly enjoyable study that gives equal prominece to Nabokov as Kubrick. Indeed, it is structured in imitation of Nabokov's other famous masterpiece, 'Pale Fire', with a poem 'Pale Film' and commentary. there's no overall thesis beyond the one outlined above, just a fascinating patchwork of insights concerning Nabokov (his life; 'Lolita' and his other work; his ambiguous, often contradictory response to cinema in general and Kubrick's film in particular; his unfilmable screenplay); Kubrick (his biography, poised before becoming the 'Stanley Kubrick' of legend; his themes; 'Lolita''s position in his oeuvre); the close connections between two seemingly disparate artists - their megalomaniacal conception of their art; their fondness for hermetic works about mad criminals.Corliss' insights in detail are more persuasive than his general interpretations. Part of the problem is his critical conservatism - despite his protestations to the contrary, he reads Nabokov's book like a 19th century, character-driven, thematically coherent, realistic novel (when, on a textual level, it is the uncorroborated confession of a sick paedophile and murderer, and, on an ontological level, the masterpiece of a notoriously leg-pulling formalist); he reads Kubrick with little reference to cinematic form. This is fatal in the cases of two artists famous for retaining the pleasures of narrative while ludically (sic?) upending them. This failure results in an undervaluing of Kubrick's film, which may be Nabokov-lite, but is full of its own tricks. Corliss, unlike most critics, notices the disparity between the two framing Castle Quilty scenes (where Humbert comes to kill his nemesis), but doesn't seem to think this radically altars our appreciation of the film (I th
Copyright © 2022 Thriftbooks.com Terms of Use | Privacy Policy | Do Not Sell My Personal Information | Accessibility Statement
ThriftBooks® and the ThriftBooks® logo are registered trademarks of Thrift Books Global, LLC