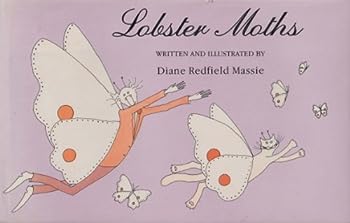 This description may be from another edition of this product. The professor and his cat are avid collectors of lobster moths until the lobster moth fairy takes things in hand and turns them both into large lobster moths with big troubles.

Published by Thriftbooks.com User , 11 years ago
I found this book in the mid 90's quite by accident, years before I had children, and it's become a family favorite. Children and adults alike will laugh at the misadventures of a predatory cat and his clueless counterpart. The story line had us all cracking up and the simple sketches are hilarious in their own right. The professor and his cat escape the police and military, due to jurisdictional bickering, and learn from their mistakes. Ultimately the characters relax, fly and party with the beautiful lobster moths, instead of devouring or dissecting them. The real world would be a better place for lobster moths, cats and professors, if more people took that advice.
Copyright © 2020 Thriftbooks.com Terms of Use | Privacy Policy | Do Not Sell My Personal Information | Accessibility Statement
ThriftBooks® and the ThriftBooks® logo are registered trademarks of Thrift Books Global, LLC