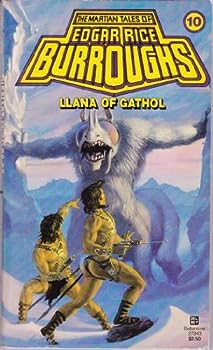 Llana of Gathol (The Martian Tales No. 10)

BREAKING A HEART IN ONE STUPID STEP After Kagari reveals her love to Raizo, in a typical moment of thoughtless candor he tells her that they had in fact never kissed. This sets off a firestorm of events where Katari's Shintaigo is broken along with her heart, and in her moment of weakness, she is spirited away by Seigan's minions to his castle, Kabuki. Will Seigan finally get Kagari's Shintaigo? Or will Raizo and his kunoichi be able to save her?...

An outstanding episode in the Barsoom series

Published by Thriftbooks.com User , 11 years ago
"Llana of Gathol" is an excellent volume in the Barsoom series of Edgar Rice Burroughs, and the last published during ERB's lifetime. The case could be made that this is not merely the last novel (or collection of novellaes as some would have it), but the literary apex of the John Carter of Mars series. Although it is divided into four main sections, and the chapters bear the earmarks of serialization, there is a clear continuity throughout the book, and this work displays the most sophisticated literary approach of any of the Mars books. But not too sophisticated, and not so sophisticated as to drain the pleasure out of reading, the optimism out of the writing, and the courage and heroism out of the characters. John Carter, Warlord of Mars, goes off exploring the dead sea beds and ancient cities of Barsoom, only to find that an abandoned city isn't as abandoned as he thought. He runs into the oldest race of Mars, escapes from them to be taken by the Black Pirates of Mars, frees himself from them to find one of his allied cities under seige by an upstart who wishes to conquer all of Mars, and ends up at the mercy of the invisible men of Mars. Along the way, he rescues his granddaughter (Llana of Gathol) from kidnappers, makes snide remarks about her smitten suitor, kills a bunch of bad guys, steals aircraft, and generally acts in his customary heroic fashion. Generally, John Carter alternates between being the Warlord of Mars, a slave, a fugitive, and a mercenary with gay abandon, crushing his enemies, seeing them driven before him, and listening to the lamentations of their wives and daughters as he embraces them (the wives and daughters, not the enemies). A rollicking good time for all. This is among the best of early science fiction, and all swords and leather jockstrap fiction. E. M. Van Court

READ THIS ONE FOR THE FUN OF IT

Published by Thriftbooks.com User , 17 years ago
"Damsel in distress," "he done her wrong," etc. Burroughs' does a wonderful job of poking a bit of fun at himself here, and in doing so, gives us a wonder lesson in this particular genre. This is a fun read. It should not be taken seriously, read it and enjoy it. I read this entire series well over fifty years ago and am still fastinated with them. Highly recommend.

John Carter has a series of tongue-in-cheek adventrues

Published by Thriftbooks.com User , 18 years ago
"Llana of Gathol" is the oddest book in the Edgar Rice Burroughs Martian series for a couple of reasons. First, it is not a novel per se, but a collection of four novellas that ERB wrote for "Amazing Stories" in 1941. Consequently, it has more of the feel of a sequel than most of the Martian books. Second, there is a healthy suspicion that Burroughs was having a bit of fun with the formula he had made so successful in his pulp fiction yarns set on Barsoom. In other words, if you think of these stories as being parodies you are going to enjoy them a lot more than if you try to take them at face value as adventures. Llana is John Carter's granddaughter and the daughter of Gahan of Gathol and Tara of Helium and she is the requisite damsel in distress."The Ancient Dead" (originally published as "The City of Mummies") begins with John Carter out for a ride in his flier, saving a white man with yellow hair from a horde of green men, and ending up the prisoner of Ho Ran Kim, the Jeddak of Horz. Pan Dan Chee, the man Carter rescues, becomes his friend and while playing jetan with Carter's personal set, Pan Dee Chee falls in love with the piece fashioned to look like Llana. You have to admit this is a funny idea, and you have to laugh at the twist ERB comes up with for the "hero must fight for princess" bit that is a staple of his adventures once Llana literally pops up in the story."The Black Pirates of Barsoom" picks up where the previous story left off, with our trio walking back to Helium, and is basically one of those stories when John Carter and his group are enslaved and his fighting prowess gets him sent to the arena. There is an imaginative machine that helps keep the slaves in line, but overall there is nothing here that we have not seen before in this series. Meanwhile, Llana continues to act like a brat and put Pan Dan Chee through the wringer in clearly tongue-in-cheek fashion."Escape on Mars" (originally published as "Yellow Men of Mars") finds the gang in the vicinity of Gathol, which is being attacked by Hin Abtol, the self-proclaimed Jeddak of Jeddaks of the North. This is the story where Llana has to be rescued (come on, you know it was coming) and finds John Carter being rather glib when it comes to the "to be continued" climax."Invisible Men of Mars" has Carter trying to deal with Llana's romantic problems and the fact that he needs to have the fleet of Helium teach Hin Abtol a lesson about trying to conquer the world. He also has to deal with Rojas, a girl he picks up on the way and who keeps throwing herself at him in a way that makes La of Opar look like a nun (keep in mind, John Carter is a grandfather at this point). The big climax is standard ERB fare except the author is clearly having too much fun.As I indicated above, if you take these stories seriously you are clearly missing the point. During this period Burroughs was into the idea of self-parody, and you can find similar satirical stories in both the Tarzan an

A LIGHTHEARTED PACKET OF WONDERS

Published by Thriftbooks.com User , 18 years ago
"Llana of Gathol" is the 10th of 11 John Carter of Mars books that Edgar Rice Burroughs left to the world. This book is comprised of four linked short tales that first appeared in "Amazing Stories Magazine" from March to October 1941. Each of these stories is around 50 pages in length and is made up of 13 very short chapters. In the first tale, "The Ancient Dead," John Carter goes for a spin in his flier to get away from it all, and winds up in the ancient Barsoomian city of Horz. This long-dead city, however, turns out to be anything but. In "The Black Pirates of Barsoom," Carter discovers an enclave of the First Born (last seen in book 2, "The Gods of Mars") and is forced to fight in their gladiator-style games. In "Escape on Mars," Carter goes to the aid of the besieged city of Gathol, and winds up stealing a battleship and putting together an untrustworthy crew of mercenaries and assassins. Finally, in "Invisible Men of Mars," Carter and his granddaughter, the eponymous Llana, come upon the lost city of Invar, and its invisible inhabitants. Space does not permit me to go into the remarkable plot twists and surprises that this book offers. Each of the tales is a little gem of swift-moving action, but this time presented with a decidedly lighthearted touch. For all the serious goings-on, this Carter volume features the most humor yet seen in the series. This combination of deadly action, presented with a light tone, is a very appealing one. The book is also something of a nostalgia piece; of all the books in the series, this one refers back to events in previous volumes more than any of the others. Indeed, I can hardly see how a reader could really enjoy this collection without a thorough knowledge of ALL the previous entries in the series. And in addition to previous events being referred to, we also see, in "Llana of Gathol," the return of several characters from earlier volumes: Ptor Fak from "A Princess of Mars," Tan Hadron from "A Fighting Man of Mars," Zithad from "The Gods of Mars" and so on. This harking back to old events and characters strikes me as being not repetitive, as some readers have claimed, but a nice, almost nostalgic tribute to past events. The book also features one of the longest and nastiest sword fights that Carter has ever engaged in; the one with Motus, in the city of Invar. This is one memorable sequence, indeed. Carter is told several times during the course of this novel, by one or another of his many enemies, that "Resistance is futile." I can't help wondering whether the creators of Star Trek's Borg menace were Burroughs fans! Anyway, these short-story gems will certainly entertain any lover of fast-moving sci-fi/fantasy. All of which is not to say that the book contains no problems, however. Like ALL the previous books in the Carter series, this one contains some doozies. For example, the use of outrageous coincidence, while frequent in past volumes, is waaay overused in this book. I refer here to the coinci

Published by Thriftbooks.com User , 20 years ago
This book (in my opinion) is very good and i wish that the series would have ended here because the eleventh book, John Carter of Mars (again in my opinion) is one of the worst books that i have ever read.
Copyright © 2020 Thriftbooks.com Terms of Use | Privacy Policy | Do Not Sell My Personal Information | Accessibility Statement
ThriftBooks® and the ThriftBooks® logo are registered trademarks of Thrift Books Global, LLC