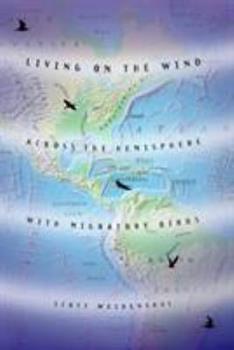 Living on the Wind: Across the Hemisphere with Migratory Birds

Living on the Wind is a magisterial work of nature writing from author Scott Weidensaul. Bird migration is the world's only true unifying natural phenomenon, stitching the continents together in a way that even the great weather systems fail to do. Scott Weidensaul follows awesome kettles of hawks over the Mexican coastal plains, bar-tailed godwits that hitchhike on gale winds 7,000 miles nonstop across the Pacific from Alaska to New Zealand, and...

Tales of migration that read like a Crichton novel...

Published by Thriftbooks.com User , 21 years ago
This is absolutely one of the best non-fiction books I have ever read. Not only backyard birding enthusiasts, but anyone who has ever had even a passing interest in birds will love this book. Scott writes about birds in an understanding yet scientific manner that lends itself to wonderful readability while providing vast amounts of information. Beginning in Alaska, moving down the hemisphere to the pampas of Argentina, and back again, he takes the reader on a amazing journey that literally follows the paths taken by millions of birds each year. He combines personal field experiences with well assembled accounts of scientific research and ornithological history to paint a vivid picture of the swirling patterns of avian movement across the globe. If you have ever looked twice at a bird passing overhead, I highly reccomend picking up this valuable addition to any naturalist's library.

An eloquent and informative book

Published by Thriftbooks.com User , 21 years ago
Writing with obvious affection for the subject, Scott Weidensaul does an exceptional job of reviewing the complex topic of avian migration. The book is an up-to-date treatment of how, why, and to where birds move (at least in the Western Hemisphere). It is not written as a standard ornithological text (nor was it meant to be one) in that it does not include citations at every fact, but this makes the book flow more smoothly, and references are included at the end. The book is chock full of details, some written as very readable anecdotes about the author's travels and experiences as a birder and bird-bander. His lyrical descriptions of birds and their migratory accomplishments do justice to an incredible biological phenomenon.

If you enjoy birds or natural science, read this great book!

Published by Thriftbooks.com User , 22 years ago
I have been a birdwatcher for 39 years, and rarely have I encountered a book that I enjoyed as much as this. Unlike another reviewer, I learned a great deal about migration from reading this book--though, truth to tell, the book is as much about population dynamics among Western Hemisphere birds as it is about migration. One of the particular insights I gained from the book is a better realization of the somewhat parochial viewpoint many of us birdwatchers in North America take, considering migrants who spend only a brief part of the year breeding here to be "our birds," when they spend most of their lives either in Latin America or migrating between the two continents. The author has an unusually captivating writing style and most of the book was hard for me to put down; he reminds me of some of the best nature writers I have encountered--Hal Borland, John Burroughs, Loren Eiseley, Pete Dunn, and Thoreau. One of the book's particular strengths is its focus on certain critical locales as well as individual species; the general observations have much more meaning because of these case examples. While the book is most likely to be appreciated best by veteran birdwatchers, I do feel that almost anyone with a natural history bent can find some enjoyment in it. Among the few shortcomings of the book are the lack of illustrations for those unfamiliar with the individual species--something that can be remedied by referring to a field guide as one reads it--as well as the paucity of really good maps. (There are a few scattered maps, but the text makes repeated reference to sites in the Western Hemisphere--especially outside the U.S. and Canada--about whose location I had no idea. Because many of them are obscure places, a general purpose atlas is unlikely to be much help.) As a final strength of the book, I should point out its beautiful dust jacket, with embossed bird silhouettes atop a topographical map of the hemisphere, as well as the handsome typesetting job. In other words, it is a book to be appreciated for more than just its content.

Published by Thriftbooks.com User , 23 years ago
Living on the Wind is, simply put, the best non-fiction I've read in the past year. Yes, I'm a birder, but Weidensaul's vivid, bell-clear prose makes the world of migratory birds and those who care about them come alive for anyone who picks up the book. Comprehensive and detailed, the book leaves you changed in your understanding of the largely invisible nation of birds outside your door.

Moving, well-informed discussion of migration in the '90s.

Published by Thriftbooks.com User , 23 years ago
This review by Charlotte Seidenberg was published Sunday, May 9, 1999 in the Minneapolis Star-Tribune ''So tell me, what is a blackburnian warbler worth, orange and ebony like a jungle tiger?'' Scott Weidensaul asks in ''Living on the Wind: Across the Globe with Migratory Birds." "In the end such measures are pointless," he answers. "We should probably just stand aside and watch with quiet humility as another generation of travelers flies north, compelled by a priceless bravery buried deep in their genes." Though some gloomy scientists predict the end of migrations in our lifetime, Weidensaul says "there's no future in pessimism. Here, at the last possible moment, we have awakened to what we stand to lose -- poised on the brink, but still, perhaps, with time to draw away from the edge." This immensely readable exploration of bird migration by a prolific nature writer and licensed bird bander shows us just what we stand to lose. It's science that reads like adventure with well-drawn characters in vividly described settings. It's about birds and nature, but also about people and the ways they interact with the natural world. It's a cliffhanger with the ending as yet unwritten. The author traveled from one end of the Western Hemisphere to the other pursuing the mysteries of migration: from the western Alaskan breeding grounds of millions of shorebirds with names such as tattler and dunlin and godwit to the Argentine pampas, wintering grounds of the Swainson's hawk, "a bird made of light and shadow, at home in the pale blue bowl of the prairie sky." In Vera Cruz, Mexico, he watched thousands of migratory hawks, kites, and vultures "move across the landscape by sliding from thermal to thermal, forming enormous kettles that swirl and seethe with wheeling birds." He visited the Platte River in Nebraska, where half a million sandhill cranes with six-foot wingspans rest on their way to the tundra, and experienced an avian "fallout" on the Gulf Coast, where "small explosions of birds would materialize out of the sky, whirring from on high, beyond the limit of vision and into the trees like bolts, until the woods were stuffed to overflowing with them." People in pursuit Weidensaul's human subjects are equally vivid, ranging from passionate goose hunters to birders "with thousand dollar binoculars and field guides worn in holster-like pouches riding low on their hips." He introduces a backyard birder who fed a ton and a half of food to 150 grosbeaks in his yard one winter and "citizen scientists" who collaborate on research projects, doing field work in their backyards and reporting via the Internet. Elucidating the scientific process for the layman, he makes fieldwork seem like adventure, describing ornithologists who signed onto Norwegian freighters to prove trans-Gulf migration, who rigged hawks with radio transmitters to track them to their wintering grounds, who used radar to study migration and gathered the
Trustpilot
Copyright © 2022 Thriftbooks.com Terms of Use | Privacy Policy | Do Not Sell or Share My Personal Information | Accessibility Statement
ThriftBooks® and the ThriftBooks® logo are registered trademarks of Thrift Books Global, LLC