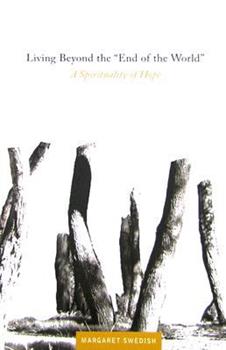 Living Beyond the "End of the World": A Spirituality of Hope

Swedish outlines a series of interrelated forces that could well undermine the fabric of life as we know it - climate change, exhaustion of natural resources, overpopulation, economic collapse and the escalation of global violence. In response to this, she outlines the spiritual values that might nurture a new community.

What kind of human responses will take place to increasing global conflict and challenge?

Published by Thriftbooks.com User , 13 years ago
From global warming to the end of natural resources, Religious Task Force coordinator Margaret Swedish poses a fine challenge to people of faith: what kind of human responses will take place to increasing global conflict and challenge? Her survey of spiritual vision and community involvement lend to a fine spirituality of hope and a passion for ethics and shared support, making this an excellent pick for college-level audiences surveying spiritual ethics and world conditions from a Christian perspective. Diane C. Donovan California Bookwatch

"We must reinvent the human presence on the earth."

Published by Thriftbooks.com User , 13 years ago
So says author Margaret Swedish in the concluding chapter of her sober but hopeful Living Beyond the End of the World. Hers is one of the most courageous books published in the last few years, and she and her publisher, Orbis, are to be commended for saying what few of us want to be told. We--the world in general and the U.S. in particular--are in a crisis, and it's likely to get much worse. Climate change is a reality that will impact economies, geopolitical relations, individual lifestyles and health, and the very stability of the good earth itself. The "American Way of Life," predicated on an abundance of cheap, nonrenewable fuel, is over. The problem is that we've become so addicted to it in the very short time it's been around--a generation or so--that we can't quite bring ourselves to believe that it's an exception rather than the rule. So we go on pursuing it, to the detriment of the environment. In the meantime, the rich truly are getting richer (and fewer) and the poor are getting poorer (and more numerous). The end of the world as we know it is upon us, and there's nothing we can do to salvage it. What we can do, however, is rethink who we are and what our purpose is--this is what Swedish means by reinventing our presence on earth. We need, as she says, to begin learning how to restore our "primary relationship" with our "home community"--earth. Doing this is a holistic work that necessarily redirects our interpersonal, economic, and political relationships too. We become better seers, better listeners, and better at grateful wonderment, because we've weaned ourselves from our alienated drive to subdue and seize the planet. Swedish tells us that she chooses to believe that the reinvention our dire situation calls for is possible. She chooses hope, believing that we can discover the moral will to create a better world, one more compatible with our role as God's stewards. But her message isn't one for pollyannas. She's painfully aware that the task before us is colossal, and that whatever happens in the future, the lifestyle that the baby-boomer generation enjoyed is a thing of the past. We're moving into a "permanent fast." The only question is whether it will be voluntary, thought-through, and reflective, or forced by circumstances. Read this book alongside James Howard Kunstler's brilliant and equally disturbing The Long Emergency, as well as his futuristic novel World Made by Hand. Equally timely are Thich Nhat Hanh's The World We Have: A Buddhist Approach to Peace and Ecology and Michael Mann & Lee Kump's Dire Predictions: Understanding Global Warming.
Copyright © 2020 Thriftbooks.com Terms of Use | Privacy Policy | Do Not Sell My Personal Information | Accessibility Statement
ThriftBooks® and the ThriftBooks® logo are registered trademarks of Thrift Books Global, LLC