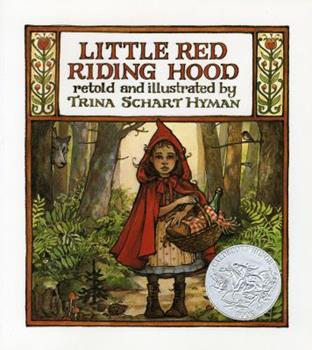 Traveling alone, deep in the woods, Elisabeth suspects her basket of treats isn't the only thing a sly wolf is after. A classic of children's literature, this retelling of the Brothers Grimm fairy tale brings new life to an old favorite with illustrations that children will linger over. Surrounded by an abundance of wildflowers, mushrooms, pinecones, and birds, Elisabeth heads off in her red cloak to visit her ailing grandmother. She's all alone--until...

Published by Thriftbooks.com User , 16 years ago
I love Trina Schart Hyman's illustration style. I appreciate her line quality and the depth she gets from her paints and the faces of her characters are so expressive. She gets so much detail into each page. It is fun to study each page and to see all that is happening as the story unfolds. I have always been an admirer of her stories.

This is the true story!

Published by Thriftbooks.com User , 17 years ago
It is so difficult to find these tales told with the original plot, and not made so happy and safe that the point gets lost. And there are important lessons from these tales. Does EVERY story have to end up with everyone living happily ever after? What is that teaching? My three year old loves the danger, gets the message and is not unduly frightened. The illustrations are charming and rich and spark her imagination. The wolf looks like a wolf and Little Red Riding Hood looks like a little girl, instead of saturday morning cartoons. Trina Hyman is a magnificant artist. This is the way I remember the story instead of so many of the modern versions when the wolf ends up being changed into a repentant and compliant friend - that is not how life is and this version is honest without indulging in gross violence.

Published by Thriftbooks.com User , 21 years ago
I thought that this was a really good book. It takes the original story to the next level. Where the story that I am use to reading you do not know the name of the little girl, or know how she gets the red hood, this story goes into greater detail of the facts and it lets you personalize more with the main character. I think that this is a good book for young children. The illustrations for the book were wonderful and colorful. This is an all around good book to read.

What a treasure of a book!

Published by Thriftbooks.com User , 21 years ago
I am so glad I stumbled on to this version of "Little Red Riding Hood" and that my son and I will be able to enjoy it together for years to come. The illustrations are lush and evocative; the geraniums bloom off the pages and the calico-inspired borders make you want to cover up with a cozy quilt. The retelling is superb, as well, casting Little Red as a spunky yet polite heroine. Every child's personal library needs this story, and this is the best version of this timeless tale I've ever seen.