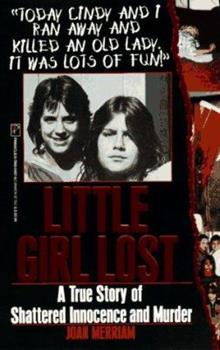 On June 14, 1983, Shirley Katherine Wolf, 14, and Cindy Lee Collier, 15, stabbed 85-year-old Anna Brackett 28 times with a knife from her own kitchen. After confessing to the grisly murder, Wolf and Collier were sentenced to he maximum penalty under California law. Here is a moving insightful look at the terrible consequences of family neglect and sexual abuse. Photo insert.

Little Girls Lost - Nobody Even Noticed Until It Was Too Late

Published by Thriftbooks.com User , 13 years ago
The author does an excellent job of explaining what brought two girls to a point where they could commit an act of unspeakable evil, without apologizing for their actions or portraying them as victims. These were two little girls that had been abandoned by their mothers, physically and sexually abused by their fathers, stepfathers and other male caretakers. Sadly, when these two became old enough and strong enough to fight back, it was an innocent old woman they chose as their victim. The laws in California have since been changed, but in 1983, the only option available to law enforcement was to charge Collier and Wolf as juveniles. Little Girl Lost is a most appropriate title for this true crime story. By the time Cindy Collier and Shirley Wolf crossed paths with their elderly victim, the system had already failed and abandoned them. In one instant, they were moved from the column marked victim to the one marked criminal defendant, and one has to marvel not at the brutality of these two girls, but at the fact that it doesn't happen more often. Had one adult stepped forward in time, perhaps a tragedy could have been averted. The best true stories of personal redemption and juveniles involve some adult stepping forward and doing something, anything to reach out to save a lost child's life. By the time a juvenile who has been an abused child commits a crime of violence against someone else, it's too late. They are indeed little girls and little boys lost.

WHY is this book out of print??

Published by Thriftbooks.com User , 19 years ago
I read this book a few years ago, and it was one of the best true crime novels ever written. It is very obviously written with much consideration and care, for both the perpetrators and the victim. Ever since reading this book, I've thought about those two girls, and how their lives were totally ruined by abuse and neglect, and wonder whatever happened to them. The author goes into much detail about the horror they suffered, which will leave you sleepless. Joan Merriam did a great job at showing the killers in a sympathetic light without taking the dignity away from the victim of this horrible crime. My heart aches still for Shirley, Cindy, and Anna Brackett. This book should not be out of print! It is an excellent example of what child abuse does to children, and the innocent victims who pay the price.

Published by Thriftbooks.com User , 22 years ago
The author of this book is a superb writer. Having read hundreds of true crime books, non have impressed me like this one. This book is an outstanding portrayal of the ravages of childhood emotional, physical and sexual abuse. Shirley and Cindy never had a fair chance at life. The book is a fast and fascinating read. It will be hard to forget. I hope Shirley and Cindy have found some peace in their lives. I think you'll agree that the parents of these two girls played a role in the murder of Anna Brackett, especially Katherine and Louis Wolf! They are a disgrace and their treatment of Shirley is unforgivable. If you want to understand why children kill, read this book.

Published by Thriftbooks.com User , 23 years ago
I read this book about 6 years ago, but I have never been able to forget the unbelievable stories of Cindy and Shirley. Two amateur killers whose life's stories will really touch you and tug at your heart.

The story of Shirley and Cindy

Published by Thriftbooks.com User , 24 years ago
If you want to know how two young girls, ages 14 and 15, could ameteurishly slaughter an 85-year-old woman who had let them into her house to let them use the telephone, then read this book.While giving due space to the horrific crime committed by Shirley Wolf and Cindy Collier, the book also recounts the abuse Shirley and Cindy suffered at the hands of their families. Shirley's experience is almost unimagineable. Her father began molesting her at age three, and began having intercourse with her at age nine. He took nude photos of her to share with other pedophiles. But there's more. It seems that, in a twisted and perverse way, Shirley loved her father, and was her mother's rival for his affections. An unbelievable but true story, it will steamroll even the most ardent reader of true crime. Read it and be changed!
Copyright © 2022 Thriftbooks.com Terms of Use | Privacy Policy | Do Not Sell My Personal Information | Accessibility Statement
ThriftBooks® and the ThriftBooks® logo are registered trademarks of Thrift Books Global, LLC