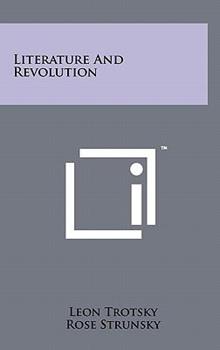 This description may be from another edition of this product. "Roll over Derrida: Literature and Revolution is back in print. Nothing in the postmodern canon comes close to the intellectual grandeur of Trotsky's vision of art and literature in an age of...

Over 50 years old and still great!

Published by Thriftbooks.com User , 12 years ago
This book written decades ago is still alive ,fresh, and vibrant. One can't be a serious critic without reading it. It's funny how that 'old time Marxism/ Trotskyism' is still terribly RELEVANT.

The Struggle for Revolutionary Culture

Published by Thriftbooks.com User , 15 years ago
Trotsky once wrote that of the three great tragedies in life- hunger, sex and death- revolutionary Marxism, which was the driving force behind his life and work, mainly concerned itself with the struggle against hunger. That observation contains an essential truth about the central thrust of the Marxist tradition. However, as Trotsky demonstrates here, Marxist methodology cannot and should not be reduced to an analysis of and prescription for that single struggle. Here Trotsky takes on an aspect of the struggle for mass cultural development. In a healthy post-capitalist society mass cultural development would be greatly expanded and encouraged. If the task of socialism were merely to vastly expand economic equality, in a sense, it would be a relativity simple task for a healthy socialist society in concert with other like-minded societies to provide general economic equality with a little tweaking after vanquishing the capitalism mode of production. What Marxism aims for, and Trotsky defends here, is a prospect that with the end of class society and economic and social injustice the capacity of individual human beings to reach new heights of intellectual and creative development should flourish. That is the thought that underpins Trotsky's work here as he analyzes various trends in Russian literature in the immediate aftermath of the October Revolution of 1917. In short, Marxism is certainly not a method to be followed in order to write great literature but it does allow one to set that literature in its social context and interrelatedness. You will find no Deconstructionist or other fashionable literary criticism here. Quite the contrary. Here Trotsky uses his finely tuned skill as a Marxist to great effect as he analyzes the various trends of literature as they were affected (or not affected) by the October Revolution and sniffs out what in false in some of the literary trends. Mainly, at the time of writing, the jury was still out about the prospects of many of these trends. He analyzes many of the trends that became important later in the century in world literature, like futurism constructivism, and others- some of which have disappeared and some of which still survive. The most important and lasting polemic which Trotsky raised here, however, was the fight against the proponents of `proletarian culture'. The argument put forth by this trend maintained that since the Soviet Union was a workers state those who wrote about working class themes or were workers themselves should, in the interest of cultural development, be given special status and encouragement (read: a monopoly on the literary front). Trotsky makes short shrift of this argument by noting that, in theory at least as its turned out, the proletarian state was only a transitional state and therefore no lasting `proletarian culture' would have time to develop. Although history did not turn out to prove Trotsky correct the polemic is still relevant to any theory of mass cultur

One of the most important books of the 20th Century

Published by Thriftbooks.com User , 19 years ago
This is simply one of the most important books of the 20th Century. Trotsky wrote this book at the request of Lenin who edited it. They saw fighting against those who wanted to impose a so-called "proletarian" culture as the official culture of the Soviet Union, as a threat to a real Marxist understanding of culture. Judging culture by its explicit politics, rather than by its expression of human life, Trotsky explains, is as far from Marxism as you can get. Trotsky explains that even some of the most reactionary minded writers have create some of the most stirringly real and vibrant literature, how to road to real socialism will come by giving working people full and free access to the best and the worst of the literature and art that capitalism has produced. No one who reads this book will think that the garbage that passed for cultural theory in the Soviet Union under Stalin and his successors or under Mao and his successors has anything to do with socialism or Marxism
Copyright © 2020 Thriftbooks.com Terms of Use | Privacy Policy | Do Not Sell My Personal Information | Accessibility Statement
ThriftBooks® and the ThriftBooks® logo are registered trademarks of Thrift Books Global, LLC