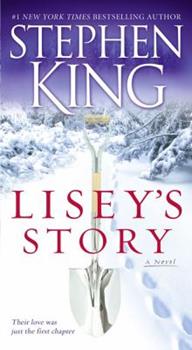 Now in paperback, from the acclaimed #1 New York Times and undisputed King of Horror Stephen King, comes the story of a writer's widow who must confront his demons after his death-- Lisey's Story is about the wellsprings of creativity, the temptation of madness, and the secret language of love. Lisey Debusher Landon lost her husband Scott two years ago, after a twenty-five year marriage of the most profound and sometimes frightening intimacy. Lisey...

Published by Stacy , 1 year ago
One of my favorites

Return of The King

Published by Thriftbooks.com User , 16 years ago
2006 has been a great year for masters of the supernatural horror genre, but until now the master of them all hasn't put in a worthwhile appearance. Well that's all changed and how! After a mildly disappointing recent effort by his own standards with this years earlier novel "The Cell" King was being overshadowed by the likes of Scott Smith, James Herbert and Cormac McCarthy. But now he's back to show everyone who exactly who does it best. Lisey's Story has a great many of the attributes a true fan of SK would associate with his work. There's the character Scott Landon who just happens to be an author for starters! Anyway the story follows Lisey who was the great love of Scott Landon's life before his passing two years before the book begins. Well with Scott six feet under and Lisey all alone and mourning, along comes one of King's truly evil characters in the shape of Jimmy Dooley. Anxious to get his hands on Scott's unpublished works, this man will stop at nothing. King has brought wonderful dialogue, tension, suspense and all of the trademarks from his best work to the table in Lisey's Story. Essentially a fairly uncomplex storyline, the book's strength lies as always in the immense investment the author puts into his characters. Lisey's sister Amanda talking to her in the voice of her dead husband is a delightful intricacy for example. Every single one of the characters (no matter how minor they may seem at first) is multi-layered. Every line of dialogue is carefully fashioned, and every narrative paints a picture the reader can't fail to visualise in their minds eye. There have been many of Stephen King's books of late that have been referred to as a return to form. Personally I don't think he ever really lost it. If every book is a return to form then surely the form was never lost in the first place? The competition might be getting stronger, but no one is quite ready to knock the master from his rightful place atop the mountain of horror and suspense. At 528 pages there is enough here to keep a reader occupied and enthralled for a fair few hours, days or weeks depending on whether you want to rush it or savour it. One thing's for sure though. No matter how long it takes to read, it's worth every penny.

A Masterful Story . . . And Insight into Stephen King.

Published by Thriftbooks.com User , 16 years ago
I have read a great deal of Stephen King's writing, enjoying many of his works and questioning others to a degree. However, I do not recall ever feeling so connected the way I did with `Lisey's Story': in my opinion, this is Stephen King at his best. Why? Well, the relationship of Stephen King and the story's deceased supportive character, Scott Landon appear to be very similar. In retrospect, `Lisey's Story' is I believe, as much about widower Lisey Landon, her deceased author husband Scott Landon, Jimmy Dooley, and a spin-tingling place called Boo'ya Moon as it is about Stephen King. Clearly, and what I appreciate most is that the author joyfully celebrates (I know this may be an odd descriptive to include in a King novel) the craft of writing and the sense of accomplishment of being a writer (writers write regardless of if you are published or not), as it is King sharing a bit of his soul with his reader audience. In this sense, `Lisey's Story' offer Stephen King's readers a unique insight into one of the greatest writers of this century. Perhaps it is coming of a deeper understanding of life and his own mortality, perhaps it is a desire to write about the never-ending attachment of love, perhaps it is due to his desire to share with his reader some lessons (as seen through Lisey's actions) about commitment . . . or it could be Stephen King simply being Stephen King - maestro of the written word - that readers will walk away with a different sense of depth as it relates to life than from any other Stephen King book. The story itself moves perfectly from the present to the past, as King easily uses flashback keys to move the present story forward in a manner that keeps the forward movement of the novel. Part love story, part suspense, part mystery, and a whole lot of Stephen King, `Lisey's Story' is simply a spectacular read.

Published by Thriftbooks.com User , 16 years ago
Two years have passed since Lisey Landon's husband Scott died. While she mourned her loss and found an emptiness and loneliness with his demise, the outside world never gave her a moment of peace. Everyone from college professors to paparazzi to collectors pulled stunts to get the grieving widow to acquiesce to their demands to allow them to catalogue his papers and publish his final manuscripts. Scott was a rarity, as an extremely popular author with strong critical acclaim. The last intruder threatened to harm her if she failed to give him access. Sick of everyone, Lisey decides peace will only come if she chooses to donate her beloved late spouse's papers to a reputable archival library. She begins to organize his work while someone increases the threats to physically hurt her. Though frightened Lisey hears Scott's voice advising her to go to the dark place where he and his dead brother used to escape to hide from their psychopathic father and where he as an adult found his muse. She trusts his love for her and ventures to this dark place where beauty and horror reside side by side as Scott's demons dominate, but here in Boo'ya Moon, her demons surface to destroy her if she lets them. This is a haunting love story that is part psychological horror and part parable as Stephen King is at his best with the dangers of traveling through the darkness of the mind to reach a personal enlightenment. Readers see first hand what disturbed Scott and how he dealt with his nightmares as well as Lisey's fears and strengths. While there is real potential harm from those making demands of Lisey, the most dangerous and ironically loveliest place in the world is the imagination. Mr. King is the king with this terrific touching tale. Harriet Klausner

Published by Thriftbooks.com User , 16 years ago
This is part of a longer review I did for Compulsive Reader. I loved the book so well, I wanted to share some of that with you here. The pictures of the cover of the book don't do it justice. You should pick up one for yourself and see what they've done. Lisey (pronounced Lee-See) and Scott are a young couple in love and become a couple married for a good number of years. Scott is an author who comes from a violent childhood. To me, this story is just about as much his as it is Lisey's. We travel back and forth in time, where King explains to us what's happened in the past that makes the present make sense. Scott has met with an unfortunate death and leaves behind a few things for Lisey to find. These things will help her more than you think. Once Scott has left this life, Lisey is contacted by people who want to go over Scott's unpublished work. One of these people, a man by the name of Jimmy Dooley (and several other names), contacts Lisey and threatens her. His threats are not just so much hot air, as Lisey finds out, and finds out the hard way. He's a violent man, one who will kill her if he can, who will use any excuse to do it. Or perhaps he doesn't need an excuse. He wants to torture her first, though. Let me tell you, this is one bad man to run into! Lisey's sister, Amanda, has had a troubled life herself and is known to cut herself. Lisey and her other sisters aren't sure what to do for her, other than commit her. Amanda has her part to play in the events unfolding, though. If she's locked up, she will have a difficult time helping Lisey, though. So what is Lisey to do? For those of you who have read any of King's work, you'll understand when I say he has a way with a turn of phrase that sings. For instance: "She opened her arms to Jim Dooley and caught him like a fever." So many have gone on about how he writes as if he's sitting right there with you. I'm not so sure it's that, but rather he has the vocabulary that reaches inside of us and makes us remember we're alive. His work stands up to rereading wonderfully as many can tell you, and each plot is memorable. If you say Dreamcatcher, I can tell you what happened. If you say Insomnia or It or Gunslinger, I can do the same. Some prolific authors lose that distinction in their quantity. Not King. I also want to thank Scribner for making advance copies available. It used to be that there was no hope of getting ahold of one in order to write an early review. This time they've distributed more of them for a King book than they ever have, and it's with joy that I can tell you that I'll be right in line buying the hardcover for this title along with the rest of you. I collect all of King's work in hardcover, because it holds up to time. I know I'll be reading it again. And again. LISEY'S STORY sneaks up behind you on quiet little feet, then walks beside you as you become aware of the journey you're taking. Then....wow! Suddenly you're looking at a roller coaster ride of emotions and a

Lisey's Story Mentions in Our Blog