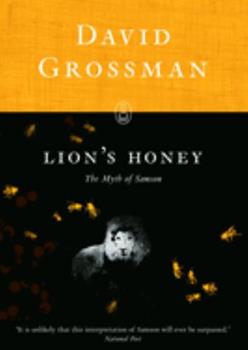 Lion's Honey: The Myth of Samson

(Book #5 in the Canongate's The Myths Series)

In exhilarating and lucid prose, Grossman gives us a provocative new take on the story of Samson: his battle with the lion, the three hundred burning foxes, the women he bedded, the one he loved and... This description may be from another edition of this product.

A most beneficial bible-study lesson...

Published by Thriftbooks.com User , 12 years ago
David Grossman is one of Israeli's pre-eminent novelists, perhaps best known for his book, "The Yellow Wind." And through his writings, as well as his advocacy, he serves as a conscious for a nation. "Lion's Honey, The Myth of Samson," is a careful examination of four chapters in the Book of Judges in the Old Testament, which are included at the beginning of his analysis. Grossman meticulously weighs each sentence, holds each to the light, seeing the nuance, what was said, what wasn't, who was there, who wasn't. He is given to conjecture also, but always identifies it as such, even to the proposition that Samson may actually have been the product of an affair between his mother, previously "the barren one," the woman of no name, prior to the arrival of an "angel," who may have been a flesh and blood Philistine. The author also discusses the existential questions surrounding Samson; he is always the "outsider." He is also enmeshed in relationships with his people's overlord, and therefore enemy, the Philistines. He chooses a wife from them, who betrays him, and then goes to seek solace among them in Gaza, finding the only woman with a name in this drama, Delilah, who also repeatedly betrays him. His need for betrayal seems to be self-evident, and so Grossman naturally speculates how this relates to his mother. It is a short, but very dense book, and much more could be said. Fortunately "my neighbor" to the north, R. M. Peterson, who recommended the book to me, has posted an excellent, detailed review which I highly recommend. Many Americans would believe the words in Judges, as well as the rest of the Old Testament to be literally true. Grossman is quite clear where he stands on the issue, including "myth" in the sub-title to his work. And it is one that dates to the very beginning of historical time, around the 10th-11th century B.C., but still reverberates today, from the Cecile B. DeMille movie, "Samson and Delilah" to the Israeli Army units that bear the name of Samson. Grossman boldly labels Samson "in a sense, the first suicide-killer," and the implications seem clear that he is but a symbol for his people, who may use their strength to bring down the entire Temple of the Middle East upon them. I just finished reviewing John Laurence's "The Cat from Hue." He tried to end his 800 plus page tomb on an upbeat note- that maybe our political elites, as well as those they represent, had learned their lessons, and would not repeat the folly again, but would instead use "caution and prudence, maybe even humility, when considering military action against another country." Of course it didn't work out that way, and Grossman doesn't raise that hope, but simply poses the question: "Or in other words, why do human beings compulsively repeat destructive experiences, re-creating in the course of their lives the dysfunctional relationships and the self-defeating situations that arouse their worst, most toxic feelings?" (p. 131) Indeed, for

Published by Thriftbooks.com User , 13 years ago
Fabulous interpretation of the Samson story and one sure to enlighten even those who think they know the story.

Published by Thriftbooks.com User , 14 years ago
Unlike the other volumes I have read in the Canongate series of Myths Retold, this book about the myth of Samson is not a novel, a retelling of an ancient myth into a modern setting, but rather a minute and scholarly examination of the biblical text, picking up every tiny nuance and finding significances in the way it is told that would escape the average reader (though Talmudic scholars have pored over them in the past). For example, the simple sentence that Samson's father Manoah `rose and followed his wife' should show us that how weak he was, for, as a Talmudic commentator had it, ` a man does not walk behind a woman on the road - not even his wife'. The story narrated in the Bible is full of action, but is silent about the thoughts of the different characters in it. These silences Grossman fills out with ever more subtle psychological speculations, in the course of which Samson appears not so much as 'an infantile bully', and more as an inarticulate and tortured being, conscious of being driven from his conception onwards by a God-given destiny which makes him unhappily different from other men, something that also sets an uneasy distance between him and even his parents, so that he has never ever, from birth onwards, been truly loved. Deep down, he longs to be like `every other man', and perhaps it is that that makes him reveal his secret to Delilah. Though Samson has at times been `read pejoratively in the Jewish tradition', he is also `inscribed in the Jewish consciousness as a national hero and a symbol'. Grossman, an Israeli, is a critical analyst of many aspects of Israeli attitudes and policies, and at one point he comments on the many echoes of the story in the position of Israel in particular: perhaps its strength is also a liability. He sees both Samson and Israel as troubled by `a deep existential insecurity'. I was expecting this line of thought to culminate in Grossman expressing the fear that out of its very strength Israel might one day bring the whole structure of the Middle East crashing down, in an apocalypse that would spell not only the destruction of her enemies but of herself also. He does not say so - but I wonder whether I dare speculatively interpret his silence in this not so far-fetched way?

Published by Thriftbooks.com User , 16 years ago
I've always thought Samson one of the least likable heroes in the bible: an infantile bully, a selfish, stupid child in the body of a giant. Grossman shows a Samson who is much more than that. Yes, he is selfish and violent, but also hurt, lonely, and always yearning for love. This book contains interesting foreys into literature, etymology, religion and contemporary culture, but stays focused on the main subject: the heartbreaking story of a man born to be betreayed, again and again, by his mother, his wife, his people, the one woman he loved, and maybe most of all, by his god. Beautiful, fascinating and touching highly recommended.

Published by Thriftbooks.com User , 16 years ago
According to the Bible, Samson was called by the Lord. In the eyes of Hollywood it was a prime role for Victor Mature. Most will use Samson as a synonym for strong man. Yet little is truly known about the man. Acclaimed writer David Grossman has an advantage over many would be biographers in that he can read the story of Samson in Hebrew, and for this author the man who brought down the Temple killing not only himself but some 3,000 Philistines was quixotic, troubled, and alone. As the author describes his hero's psychological characteristics, he ably draws a parallel between Samson and man today by saying, ""Yet, beyond the wild impulsiveness, the chaos, the din, we can make out a life story that is, at bottom, the tortured journey of a single, lonely and turbulent soul who never found, anywhere, a true home in the world, whose very body was a harsh place of exile. For me, this discovery, this recognition, is the point at which the myth -- for all its grand images, its larger-than-life adventures -- slips silently into the day-to-day existence of each of us, into our most private moments, our buried secrets." Even the most recalcitrant Sunday School student probably remembers the story of Samson as it is packed with excitement, drama, and adventure. According to the text, an angel appeared to Samson's mother before he was born saying that he would be the one to save his people. We remember that the secret of his uncommon strength lay in his long hair, which was cut by Delilah who then gave him to his enemies. It was a tortuous journey to fulfill that early prophecy. Writer, director, voice performer Mel Foster offers a highly listenable narration of the story of one of the most fascinating yet enigmatic biblical figures. - Gail Cooke
Trustpilot
Copyright © 2022 Thriftbooks.com Terms of Use | Privacy Policy | Do Not Sell My Personal Information | Accessibility Statement
ThriftBooks® and the ThriftBooks® logo are registered trademarks of Thrift Books Global, LLC