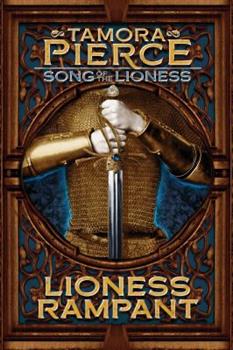 From Tamora Pierce, the final book in the Song of the Lioness Quartet, honored with the Margaret A. Edwards Award. Having achieved her dream of becoming the first female knight errant, Alanna of Trebond is not sure what to do next. She has triumphed in countless bloody battles, and her adventures are already legendary. Perhaps being a knight errant is not all that Alanna needs...but Alanna must push her uncertainty aside when she is challenged with...

Published by Thriftbooks.com User , 17 years ago
One of my favorite books of all time, hands down. Rip-roaring adventure, fascinating new characters, humor, romance, and a dramatic climax. This is a triumphant end to T. Pierce's great series. Most of the merits of this book have already been outlined here, and in greater detail. The real reason for my review is below, and be warned that it contains spoilers. In Alanna's choice of George, Pierce illustrates a point that is, unfortunately, lost on most young readers. For my part, I know that when I was 13, the fact that Alanna ended up with George disappointed and escaped me. Over time, a few re-readings, and relationships of my own, however, the ending becomes more and more fitting. For many years I dated a guy whom I loved with all my heart. Slowly however, I realized what a huge piece of myself I'd given to him. He had fallen for an offbeat, punk chick like myself and couldn't wrap his conservative sensibilities around it. Whenever I spoke in confidence with him about my dreams of being a freelance writer, artist, world-traveler, etc., he became very indignant - because it took time away from being with him.Every Christmas, birthday, etc. I received bland clothes and heaps of jewelery. Like Jon's intentions for Alanna, he wanted me to sit idly through life and be queen of his suburbanite castle, while my deep-seated dreams went by the wayside. George stood by Alanna, never questioned her, always yielded his support for her adventures and who she wanted to be. Interesting how Jon's status as a prince and Alanna's first love will make young fans skim over and ignore his actions and the asinine things he says to her in book three. Jon is an a$s. They are clearly incompatible. Let go of your old fairytale notions, seek your own independence and a companion who will help you along that journey.

The Impressive Final book in the Quartet

Published by Thriftbooks.com User , 19 years ago
Alanna has grown a lot from the bad tempered page in the first adventure, and in this book you really get to see her shine. After parting ways with old friends in hope of a new adventure Alanna travels to Maren where she meets Liam, a tough redhead Shang Dragon who is tougher and stronger than she is, not to mention quite attractive! After the two make friends Alanna sets out with Coram and Liam to find the dominion Jewel, a legendary Jewel that can be a great gift Tortall. Unfortunately Tortall needs the Jewel much more than she suspects. Back in Tortall things are falling apart in more ways than she can ever suspect. But the worst thing that happens is when Alanna discovers that her greatest enemy, Duke Roger of Conte, has raised from the dead with help from her own brother!Lioness Rampant is a thrilling finish to this great series. I was happy to meet great new characters such as Liam and Buri. Pretty much every major character who wasn't killed off (with the exception of one) or exiled has come back for a visit. Like all of Tamora's books Lioness Rampant, and the Alanna series in general, is fast paced and exciting. I can't wait to pick up another magical quartet written by Tamora Pierce.

A Complete and Satisfying End to a Great Quartet!

Published by Thriftbooks.com User , 20 years ago
All I can say is...wow! This amazing book ends an awesome series with a bang! Pierce truly demonstrates her mastery of description and plot when she deftly resolves all the mysteries and cliff-hangers from the previous novels. The story has everything: action, adventure, combat, romance... Underneath the appearence of a "child's book" which is simply a good read, Pierce presents moral questions and philosophical riddles which make the reader stop and think. In this page-turner, Alanna quests for the Dominion Jewel, a lost treasure which, if in the right hands, has limitless power for good. But meanwhile in Tortall the forces of evil are brewing again, and the Lioness is the only one who can stop them. Our heroine learns about others and also discovers unknown feelings inside herself. If you like these, check out the Immortals and Protector of the Small series; they continue the story of this incredible world, and of course, they feature Alanna. (Psst-just to make you read on...Alanna actually has three children...don't you wonder who they are?) Here's to you, Pierce, may you never end the fantastic chronicles of an amazing world named Tortall!

One of the best young people's fantasies around!

Published by Thriftbooks.com User , 22 years ago
To begin with, I had a hard time deciding which of the Lioness books to review. I picked this one because it ties as my favorite with IN THE HAND OF THE GODESS. But it was a hard choice. The Lioness books, first read when I was twelve, really got me started on fantasy. Of course, I'd read Tolkien and Beagle, but not much else. I read Pierce's books and have been a devoted fantasy reader ever since. I'm now nineteen and I still reread the Lioness books and love them just as much. Alanna is a firey, spirited young woman and a wonderful hero--human and complete with fualts. By this time she has grown and progressed as a character so that she feels very, very real. The other characters always make me smile, and the ending always makes me cry. The writing style, well suited to young readers, moves you along and keeps you turning pages. This book, granted a darker one than the others, resolves many of the issues presented in the previous books in a believable and entertaining fashion. Finally, I am extremely glad Alanna marries George. He is one of my favorite rouges in all fantasy. Unfortunetly, this series has ruined Tamora Pierce for me. It was so good that her other series simply don't measure up. I entreat any lover of fantasy to read these books--I hope you love them as much as I do!

Published by Thriftbooks.com User , 22 years ago
This book was VERY exciting, and I couldn't put it down. The end of the story was satisfying, in my opinion( Hey- I know SOME people would rather have Alanna marry Jonathan but if they weren't right for each other-it even says that in the book- than why bother? If ya wanna book where someone marries a prince, go read Sleeping Beauty or some other silly story like that.) and I enjoyed it a lot. Alanna is in the Immortals, so I didn't go crazy like I am now waiting for the new book called The First Test. My mom even preordered the paperback version which is going to take even longer to come out! AUGHHHHHHHHHH!!!!! Well, ANYWAY, once you finish this book, you'll be hooked on the rest of the series about Daine, and so on. I've read this book (as well as all of the others) at least 3 times and now any other books I read seem just plain silly. Even ones by authors I've loved forever. If you're a sane person, you'll love this book!
Copyright © 2020 Thriftbooks.com Terms of Use | Privacy Policy | Do Not Sell My Personal Information | Accessibility Statement
ThriftBooks® and the ThriftBooks® logo are registered trademarks of Thrift Books Global, LLC