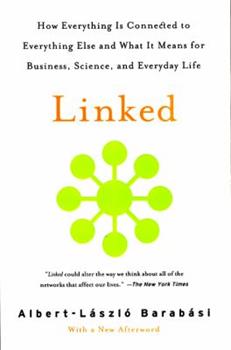 Linked: How Everything Is Connected to Everything Else and What It Means for Business, Science, and Everyday Life

by Albert-László Barabási and Jennifer Frangos

A cocktail party? A terrorist cell? Ancient bacteria? An international conglomerate? All are networks, and all are a part of a surprising scientific revolution. Albert-L?szl? Barab?si, the nation's foremost expert in the new science of networks and author of Bursts , takes us on an intellectual adventure to prove that social networks, corporations, and living organisms are more similar than previously thought. Grasping a full understanding of network...

Book's Audience: Who should be linked to this book.

Published by Thriftbooks.com User , 19 years ago
I have focused this review on the audience of the book, since other reviews have quite adequately summarized the material.There have been a lot of books recently that have been published on the new science of networks. Network theory and how it applies to many different fields from technology, marketing, biology, social science, terrorism, disease control etc. (Six Degrees by Duncan Watts, Nexus - Mark Buchanan, Smart Mobs - Howard Rheingold, Tipping Point - Malcolm Gladwell etc..).Barabasi's is a welcome addition to the field and has a nice niche, which isn't filled by the other books. As some other reviewers have pointed this book is a popular science book, which means it covers scientific and mathematical theories at a very high level and makes these theories accessible to a wide audience. The niche lies somewhere between Gladwell's Tipping Point and Watt's Six Degrees. It is very well written and draws you in with stories that explore the theories. Some of the other reviewers have complained that Barabasi has done a disservice to the theories that he explains by making them too simplistic. I disagree, I actually found this book to be very rewarding, and a quick read, which is a sign of a well-written book. I have never been a fan of scientific and academic books that pride themselves on being totally incomprehensible. Richard Feynman, the Nobel Prize winning physicist, once said that if someone truly understands a subject they should be able to explain it to a general audience without resorting to technical jargon (Feynman's Lectures on Physics Vol 1,2,3 are a perfect example). To be able to explain a complex subject you need to resort analogies, examples and stories. Stories give a framework for the general reader to absorb the complex material. Barabasi has managed to explain the science of networks using all three. I am not sure how this can be seen as a bad thing. This exposes a wider audience to a very interesting subject; this has to be good thing.Summary:Anybody who loved Gladwell's Tipping Point and was looking for a book that explains some of the theories behind the phenomena will love this book. It's a little bit more technical than Gladwell's book, but it is well written and it will appeal to a wide audience. As popular science books go, this is definitely on par with Ed Regis's Nano and Steven Levy's Artificial Life, but not quite at the level of Gleick's Chaos. If you are looking for a technical book, you should look at Duncan Watt's Six Degrees, or Small Worlds.

Of Networks and Men

Published by Thriftbooks.com User , 20 years ago
Every good song has a hook--a line or a melody that makes you want you to hear more. For me the hook that kept me reading "Linked" appears on page 6. "Here is a secret that never makes the headlines" writes the author Barabasi, a professor of physics at Notre Dame, "We have taken apart the universe and have no idea how to put it back together. After spending trillions of research dollars to dissassemble nature...we are just now acknowledging that we have no clue how to continue -- except to take it apart further." Could the prevalent reductionism be, at this point, obscuring rather that sharpening our vision of the the world? Should we give up on the idea of having an equation that could be printed on a tee shirt that contains the Theory of Everything?Barabasi's answer is not to stop analyzing, but rather to analyze certain relatively large self organized systems topologically over time, as if you were reading successive maps of a growing cosmopolitan region. As roads, building complexes, public areas and the like are added, the rules generating the growth and distribution of facilities make themselves plain. The network thus formed works in a manner that obeys certain laws (called power laws)and divides into highly connected places called hubs which link to less numerously connected nodes. Using this analytical approach, he poses and answers dozens of questions that should stimulate an intelligent reader into seeing the world a little differently.In fact, much of this book's interest derives from the activity of charting itself. Barabasi, like some latter day Henry the Navigator, explains in ordinary language why Kevin Bacon is really not very central to the Hollywood map and how the late Rod Steiger was. How Microsoft follows the same laws as a strange sort of matter. He explains how Vernon Jordan got so many corporate board seats, what may be the best way to eradicate AIDs, and what may become the newest phamaceutical approaches to disease. Terrorist networks, cancer and bad economics may all one day fall victim to strategies derived from network analysis.I have read too many popular science books to know that translating equations into popular literature is no easy feat. So many fall of their very lack of weight. My one complaint with this highly readable book is that in an effort to make the book gallop the author has taken some shortcuts which break the flow of the argument. Nonetheless, if you want to read a very good book about a scientific issue not many of us are familiar with, this is a very good one.

I wish all popular science books were this good...

Published by Thriftbooks.com User , 20 years ago
This book is an absolute diamond. I am not an explorer at the very frontiers of network dynamics, but I am an intelligent, sentient being and the ideas being developed in network research are of great importance to my life and the world I live in. I find the academic journals, where the research results are first published, (deliberately?) impenetrable, so it is a delight and a joy to find a guided tour in plain English, with an authoritative guide, through the frontiers of some very current and paradigm-changing ideas. The book's narrative is aimed at the general public, to be sure, but I hadn't heard that being a member of the general public was a crime or a slur. Perhaps I missed a meeting. I found the writing style to be clear, concise, engaging and entertaining. In short, it was one of the best books of any genre that I have ever read and I have read hundreds.Another reviewer of this book (see below) has said that Barabasi overemphasises the importance of preferential attachment in forming scale free network topologies. OK. Bring it on. Where is your counter explanation? What is the more important factor? Where is your clearly-written book explaining your counter argument for the likes of me? I would really like to know what else could possibly account for the emergence of this topology. It's important to me. To that reviewer I say, "publish or be dammed". I cannot abide elitism in scientific research, whereby those in the know jealously guard their secrets from the rest of us, so as to reinforce their self-belief in their uber-mortality. Join the real world. Tells us what you know without being patronising.If, as a reader, you are in any way interested in the spread (or diffusion) of ideas, innovations, fads, viruses, memes, rumours and a hundred other phenomena or want to understand why some things are runaway hits and others not, this book will definitely stimulate your thinking. The only minor frustration I had with the book was that in identifying Microsoft's success in operating systems as analogous to a Bose Einstein condensate (a superfluid?), the book fails to explain how the condensate can evaporate...in other words, what nodal or network conditions would have to apply to overturn Microsoft's dominance?As a published technical author myself, I know that writing this well is sheer hard work. I would be delighted if any of my own works were as brilliantly executed as Barabasi's "Linked".Buy it. You won't be sorry.

Published by Thriftbooks.com User , 20 years ago
With so much buzz about Wolfram's book, great to see a book that DOES talk about NEW science. Barabasi, the top guy in the new science of networks, talks about what he knows best: complexity and networks, and how they affect our life. While an easy read, it is full of so many thought provoking ideas, that I'd read for a while and then have to put it down to reflect over the details of what I'd just read. Gladwell's tipping point was an entertaining read, but light on true understanding. Linked makes up the difference: it breaks new ground, offering the reader insight and research into the structure of networks in just about all fields and aspects of life. While Gladwell chats about connectors, people who are incredibly sociable and well-connected, Barabasi is the one who really gets to the heart of the matter. He discovered these connectors (he calls them hubs) while looking at the www (Yahoo and Google are some of those), and he shows that they are present in the cell, in the business world (Vernon Jordan), in sex (Wild Chamberlain), in Hollyood (Kavin Bacon) and many other networks. These hubs are not accidents, but they appear in all networks as a simple rich gets richer process is responsible for them. If you REALLY want to grasp how ideas spread, how to stop AIDS, how to break down the Internet, how to use your neighbor's computer, how to make your website matter or how to became a board member in a big company, Linked is a good place to start. Barabasi breaks down a complex world into very simple, clear concepts. While I have read several books about 'new' science, this one is really about something new, exciting, and hard to forget. Highly recommend it.
Trustpilot
Copyright © 2022 Thriftbooks.com Terms of Use | Privacy Policy | Do Not Sell My Personal Information | Cookie Preferences | Accessibility Statement
ThriftBooks® and the ThriftBooks® logo are registered trademarks of Thrift Books Global, LLC