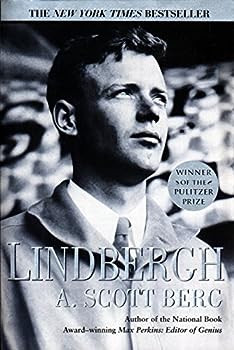 Even after twenty years, A. Scott Berg's Pulitzer Prize-winning biography of Charles Lindberg remains "the definitive account" of one of the 20th century's most extraordinary figures. Few American... This description may be from another edition of this product.

Lucky Lindy? - You Be The Judge

Published by Thriftbooks.com User , 19 years ago
So how did a farm boy from the backwoods of Minnesota become one of the most revered heroes in world history? Perhaps no book written about the ice-veined, brilliant aviator Charles A. Lindbergh answers this question better than A. Scott Berg's "Lindbergh", a marvelous, smoothly-written biography that uses heretofore unavailable sources to chronicle the unimaginable ups and equally unimaginable downs of Mr. Lindbergh's life. The book is the first biography of Lindbergh that was written with the input and blessing of Lindbergh's family, including his widow, the noted author Anne Morrow Lindbergh. For the first time, the family granted unrestricted access to masses of material in the Lindbergh archives. After reading this book, one concludes that two extreme forces shaped this great man's destiny. The first was flight, taking off with his days as a barnstormer and airmail pilot, soaring with his courageous solo in a monoplane across the Atlantic, and coming to a soft but significant landing with the endeavors of his later life that involved not only aviation, but innovative projects in the fields of medicine and environmentalism. He also distinguished himself as an author (with, I suspect, the assistance of his wife, Anne, herself a talented writer.) In 1954, "The Spirit of St. Louis" the book won the Pulitzer Prize. It remains one of this country's most compelling, true-life adventure stories. The second force was fame, the scourge of this extremely private man's life. Keep in mind that this was no normal fame, but a fame that bordered on fanaticism. It was fame that directly related to the kidnapping and death of his infant son, the family's exile to Europe, and the scorching criticism directed Lindbergh's way for his anti-war stance in the years preceding World War 11. And although Mr. Berg's book was written with the cooperation of the Lindbergh family, it doesn't gloss over the consequences of his remote personality and long absences from home. Both had much to do with Anne Morrow Lindbergh's love affair with her doctor. Some day, I hope that an ambitious television network such as HBO creates a mini-series based on this captivating biography. There is no way that a single movie can do justice to the expanse of dramatic events and stunning accomplishments that made up the life of America's greatest hero. Here was a man. And here's a biography that does him proud.

Published by Thriftbooks.com User , 19 years ago
This was, without question, one of the best, most skillfully written biographies I have ever read. I try to be tough with my five star ratings, but A. Scott Berg's bio of Charles Lindbergh was simply too great a book to rate any less than five stars. What an interesting man Charles Lindbergh was- and to think that had he not made his famous flight in May 1927 he probably would have ended up being a farmer!! Lindbergh had a natural curiousity about a great many things: aviation, democracy, politics, medicine, environmental causes, and much later in his life, religion. The one area where maybe he failed was being a dutiful husband and wife. A tough task-master to the end, he often pushed his wife and children to "be strong" in mind and not to show emotion. He was a lifelong traveller who was not around very often, building homes in remote areas on a whim only to move on to another destination upon completion while his family was left to pick up the pieces. Aside from the major aspects of Lindbergh's life, I was disappointed with the treatment Lindbergh received from FDR during World War II as I have always admired FDR as a great, creative politician. While I don't necessarily agree with some of the things Lindbergh was quoted as saying through the America First movement, FDR was unable to separate Lindbergh the man from Lindbergh the political mind, ultimately leading to FDR's blackballing of Lindbergh's involvement during the war. It seems FDR realized that Lindbergh was literally his political rival as both were considered super-men by their adoring publics, so he attempted to squash Lindbergh when he was down. These kind of limits placed on any American citizen, political adversary or not, does not speak well of Mr. Roosevelt. I will say that Lindbergh made a mistake when he chose to send copies of his correspondence with Roosevelt to the press while the original letter to Roosevelt was still in the mail, which often led to newspapers printing Lindbergh's letters opposing FDR's political stances before Roosevelt even had time to read the original letter. Lindbergh should have known you don't undercut a politician when it comes to his public, especially because FDR valued his popularity with the public so much. All in all, a great work on a great man. Lindbergh was not great from a domestic standpoint as he was not a good father or even a dedicated husband, but he was a man who explored and conquered a number of frontiers. It was only later in his life when he realized that aviation as he once knew it in the early 1920s was changing. The plane flies the man now, not the other way around, he once remarked in the 1950s. He was fascinated with the new aviation technology that came from the post-war boom and yet he loathed the capabilities of that very technology which had the potential to wipe out civilizations. I can't say enough about the book or the man. At 562 pages, it might seem long but it is hard to put down. A great book tha

Fascinating, Cautionary Tale Of The Price Of Fame & Fortune!

Published by Thriftbooks.com User , 21 years ago
From the moment his wheels touched ground at Orly Airport in Paris in May of 1927, Charles Lindbergh's life started on an incredible second journey over which he often seemed to have little guidance or control, a whirlwind life spent in the suffocating death-grasp of public attention. In this wonderful biography by A. Scott Berg, we are invited to take this momentous ride alongside "Lucky Lindy" from his birth and early beginnings to his efforts to gain fame and recognition by becoming the first man to fly solo across the Atlantic. Yet in a way totally unanticipated by the enigmatic and somewhat naïve Lindbergh, this was only the beginning of an incredible life. For in accomplishing this spellbinding feat, to this brilliantly enterprising young man's amazement, the fame and fortune he had so eagerly sought to achieve soon took control over the direction and destiny of his life. This is a book full of surprising twists and turns, and the reader is led on an entertaining and exotic excursion unto the interior of a marvelously complicated man's life, as well as into the realities of the story-book romance with his beautiful young wife, the former Anne Morrow, an ambassador's daughter. Their courtship and marriage fueled the public's imagination, and they became figures that loomed larger than life in the tabloid journalism of the early 1930s. Lindbergh found himself fashioned into the first modern day media superstar, a person so celebrated and famous it sometimes seems he spent the balance of his life's energy trying to escape such attention. As a result of his own personal qualities and frailties, and his uneasy and sometimes uncomprehending place in American spotlight, he was both deified and demonized in the public press again and again.Each event in his all-too public personal odyssey is examined here, from the trip into fame and fortune aboard the "Spirit of Saint Louis" to his romance and marriage to Anne Morrow, from their life in the spotlight to the incredible ordeal of the kidnapping and death of their infant son, which resulted in the most celebrated and controversial trials and subsequent executions in modern American history. Berg examines the evidence of the kidnapping, which eventually led to the Lindberghs fleeing for their sanity sake on an odyssey taking them to England, an island off the coast of France, and to Nazi Germany, where Lindbergh's fascination with Hitler's regime and technical prowess led him to eventual political adventurism of his own with the "America First" movement. In unsuccessfully challenging Franklin D. Roosevelt, Lindbergh lost both his public credibility and cache, becoming vilified in the press for his questionable political views and dubious patriotism. When war came Lindbergh was flatly refused any active role, but eventually found himself a way into the fracas first as a commercial test pilot, and later as an unofficial pilot in the South Pacific, where he perfor

Published by Thriftbooks.com User , 22 years ago
The author presents a thorough, vivid, balanced and very readable history of the events and times of Charles Lindbergh's life (which spanned a considerable era, from the Wright Brothers to the moon landings) as well as a perceptive, in-depth, flesh and blood portrait of the man, his personal and family life, and his career.Thanks to the copious and detailed written record that the Lindberghs kept of their experiences -- made available to Mr. Berg in addition to all his other research -- the book gave this baby boomer a riveting glimpse into the half of the Twentieth Century which I was born too late to witness. There was truly a "you are there" feel to accounts of the famous flight, the kidnapping, the trial, the couple's marriage, the birth of commercial and military aviation, the events leading up to World War II, and even Lindbergh's passing as they were unfolding. There was also a very real and intimate depiction of Charles and Anne as people through the various stages of their lives.It was enlightening that public craziness and media frenzy hardly began with Princess Di and O.J. It was also quite revealing of the times that Anne so unquestioningly suppressed aspects of herself to support her husband and his endeavors even though she was an educated and independent woman with separate needs which were quite often at odds with his.If anyone thinks this book would not interest them, they should think again. A very worthwhile read in many respects. Definitely deserved the Pulitzer Prize.
Trustpilot
Copyright © 2022 Thriftbooks.com Terms of Use | Privacy Policy | Do Not Sell My Personal Information | Accessibility Statement
ThriftBooks® and the ThriftBooks® logo are registered trademarks of Thrift Books Global, LLC