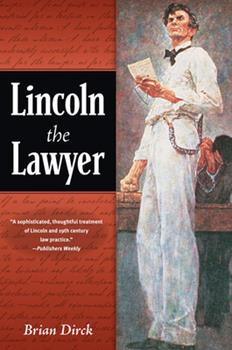 This fascinating history explores Abraham Lincoln's legal career, investigating the origins of his desire to practice law, his legal education, his partnerships with John Stuart, Stephen Logan, and William Herndon, and the maturation of his far-flung practice in the 1840s and 1850s. Brian Dirck also examines Lincoln's clientele, how he charged his clients, and how he addressed judge and jury, as well as his views on legal ethics and the supposition...

Well researched insight into a part of Lincoln too often ignored

Published by Thriftbooks.com User , 12 years ago
Abraham Lincoln is one of the most written about Presidents in American history. Every facet, one would think, has been covered many times over. That said, his 25-year legal career is woefully underrepresented in the biographical literature. Author Brian Dirck examines Lincoln's substantial time as a lawyer and in doing so gives Lincoln scholars substantial insight into the career that was nearly half of his life. Dirck takes us back in time to a period in history before the American Bar Association, formal legal training, and the emphasis on legal precedent. In Lincoln's time one could become a lawyer by showing some scholarship and convincing the local judge that you were "honest" and "of good moral character." Frontier lawyers (as Illinois at the time was "in the west") were more rustic than their eastern counterparts, and not always as well regarded. But Lincoln was a successful and busy lawyer. Dirck gives us a flavor of Lincoln's love of the circuit, the traveling road show of lawyers and judges that for months on end would move around the various rural districts to deliver justice. The camaraderie between Lincoln and his fellow jurists is well described. In large part Lincoln's legal career was rather mundane. While there are the occasional high profile cases (e.g., the Almanac trial), the vast majority of his thousands of cases were of the debt collection variety. Petty (at least by our modern standards) cases of promissory notes unpaid, divorces, and breach of contract abounded. While many post-presidency recollections by others of Lincoln's grandiose legal career were common, the reality is that most of his career was unremarkable. He had lots of business and made a comfortable living, but as Dirck remarks, Lincoln was "a middle class lawyer," not some obvious prophetic attorney clearly destined for greatness. In contrast to the dry middle sections where Dirck recounts Lincoln's caseload, the chapter "Storytelling" shows how his career seemed much greater post-mortem than in reality. That chapter and the next "Grease" are exceptionally insightful and interesting. In Grease, Dirck adds his own perspective to show how Lincoln learned in his legal career to facilitate resolution, i.e., to apply grease to the gears in order to keep things running smoothly. This concept is summed up best perhaps by Lincoln himself in his "Notes for a Law Lecture" in which he states that lawyers should "Discourage litigation. Persuade your neighbors to compromise whenever you can. Point out to them how the nominal winner is often a real loser - in fees, expenses, and waste of time. As a peacemaker the lawyer has a superior opportunity for being a good man. There will still be business enough." Dirck goes on to draw parallels between the lessons Lincoln learned during his legal career - compromise, lack of animosity, hard work, facilitating resolution by "greasing" to dissipate friction - and the way in which he managed one of the most

Lincoln and the Practice of Ante-bellum Law

Published by Thriftbooks.com User , 13 years ago
I think this book should appeal to several audiences of readers. I am not a Lincolnholic, but there are zillions of folks who are, as demonstrated by the mountains of Lincoln books and articles. They should find this personalized view of Lincoln of interest. For myself, I am interested in the development of American law, and there are relatively few books that involve the pre-Civil War period of legal practice. That is the primary focus of this book and this is a second dimension of its value. Certainly there are a number of books out on Lincoln as a lawyer; this is the first one to be based in part on the Lincoln Legal Papers ("LLP") project which sought to locate and incorporate every piece of documentation relating to Lincoln's law practice. A huge CD-ROM of 5,000 cases resulted, as well as a 4-volume printed edition issued by the University of Virginia Press. The book begins with an explanation of how Lincoln became a lawyer in the first place and what he hoped to accomplish by so doing--basically, a solid and comfortable middle class existence. So initially we see how the ethos of Jacksonian democracy made it relatively painless (in comparison to what I had to go through) to join the bar. The printed resources that Lincoln learned to rely upon are discussed, as well as how new lawyers in these developing areas formed partnerships and opened offices. The author then moves on to a series of individual chapters on the particular areas of Lincoln's practice. Mostly it was debt collection involving promissory notes. The author effective relates Lincoln's outlook to that of the evolving market economy driven by enterpreneuers and new technology. Lincoln was a big believer in internal improvements, railroads, and minimal restrictions on economic growth. Other practice areas are discussed including probate, criminal law (not too much involvement), partnership dissolutions, and Lincoln as a mediator and arbitrator. How Lincoln conducted himself in and out of court is another theme. The author wraps up his book with a most interesting discussion, which may upset some Lincoln students but which I found most interesting. How does the real Lincoln the lawyer compare to the often mythological portrayals of Lincoln in the literature? Basically, the author concludes that Lincoln was not a "superlawyer," was not particularly distinguished, but much as President Obama rated his own performance overseas, Lincoln did "ok." He was successful, a good competent lawyer, but that was about it. The author also disputes that there are ties between Lincoln the lawyer and Lincoln the president--some have suggested this in connection with the Emancipation Proclamation. This very useful volume is supported by 34 pages of notes and a solid bibliography. A valuable introduction to Lincoln the man and the lawyer.

Published by Thriftbooks.com User , 13 years ago
Brian Dirck's Lincoln the Lawyer is a "must read" for scholars and pleasure readers alike. Dirck, an Anderson University professor, takes his readers from the shock a Sangamon County farmer expressed when he learned Lincoln was studying law to Lincoln's final days as an attorney in his law office across the street from the Old State Capitol in Springfield. That journey took Lincoln through three partnerships,through courts in Springfield and the Eighth Judicial Circuit and in front of the Illinois and United States Supreme Courts. By the time Lincoln left for Washington, this self-taught lawyer was one of the most respected in the state. His cases ranged from property disputes and divorces to murders and large railroad cases. Fees he received ranged from $10 or less to the $5,000 fee he received representing the Illinois Central Railroad in their dispute with McLean County, Ill. over taxes assessed the railroad. To understand Lincoln, you must understand this important period in his life. This book will fill that need. Dirck is an academic and his book meets all the criteria of a scholarly volume - well researched, indexed, well cited - yet at no time as a reader do you feel as if you're wading through an academic work that's way over your head. Dirck's book is a comfortable, entertaining read. He's a gifted writer and a scrupulous scholar. In my book, Dirck's is a must for anyone who really wants to understand those 25 years and the longest career in Lincoln's life.

An excellent background source on Lincoln

Published by Thriftbooks.com User , 14 years ago
What do YOU do all day? This book is an illustration of the very important philosophic points made in its own the last chapters. We assume the almost superhuman character of Abe Lincoln and then we view - or interperate - the various instances of his law career (in fact, his career in general) thru that lens. Better we should consider what he actually did all day for most of his working life,and it was a real working job, and see what that can tell us about what his character might have been like. This book really gives you a feel for what his everyday life was like...and he WAS a work-a-day lawyer! I've read a lot of Lincoln bios, this is very, very informative. Dry as dust sometimes, but an A+. Oh,bonus,gives you a working knowledge of the nuts and bolts of the operation of American law at the time. It clears up why there seem to have been so many lawsuits; for one reason, there was no freely available currency, so many transactions were contractual.

Published by Thriftbooks.com User , 15 years ago
Although Lincoln's contribution to history is his handling of public policy, governance, and war, probably most of his time prior to the White House was devoted to his law practice. This book will reward anyone seeking to know how one of America's greatest minds was occupied in the troubled affairs of one ordinary person after another. The solid account is highly knowledgeable but not at all technical, written for inquiring readers rather than legal professionals. Using assorted cases as examples, the author examines the role of attorneys in what was then the American West, giving the book broader scope than just Lincoln's law practice. This is one of the first studies to exploit a recently collected mass of documents relating to Lincoln's law career.
Trustpilot
Copyright © 2022 Thriftbooks.com Terms of Use | Privacy Policy | Do Not Sell or Share My Personal Information | Accessibility Statement
ThriftBooks® and the ThriftBooks® logo are registered trademarks of Thrift Books Global, LLC