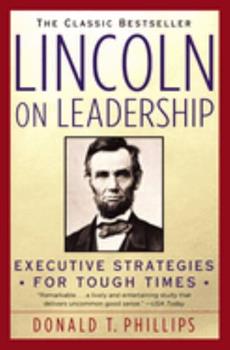 Lincoln on Leadership is the first book to examine Abraham Lincoln's diverse leadership abilities and how they can be applied to today's complex world. You think you have it rough? Only ten days before Abraham Lincoln took the oath of office in 1861, the Confederate States of America seceded from the Union, taking all Federal agencies, forts, and arenas within their territory. To make matters worse, Lincoln, who was elected by a minority of the popular...

Leadership During ALL Times

Published by Thriftbooks.com User , 14 years ago
Donald T. Phillips used our sixteenth president's wisdom under fire to provide an excellent primer for leadership focused on tough times, but it is as important during good times. When sales are at record levels, employees are happily working long hours, and new prospects are pounding on the doors because of customers' recommendations, is when one needs to be preparing for potential tough times. Few will go through the meat-grinder which faced President Lincoln, but able leadership during good times will give an organization a firm footing for the mishaps and misfortunes which will affect us all at some point. Focusing on the 'Endeavor' section of the book, Phillips illustrates examples of Lincoln's will, ability, and lack of hesitation in making tough, necessary decisions. Losing a war, being sniped at by those who should be supporters, and struggling with difficult family matters can be paralyzing, but ignoring a personnel issue so as to not rock the boat during a smooth voyage can also be destructive. Phillips points out how "Lincoln often accepted the aggravation and exasperation caused by subordinates if they did their jobs competently", but he also shows how Lincoln could be decisive and tough when his hand was forced. This includes disciplining and firing upper level staff such as cabinet secretaries and commanding generals. Any review of Lincoln's life would be incomplete without mentioning his use of humor and a unique storytelling ability to make his point. Phillips recounts Lincoln's reason for doing so, which includes these lines: "I often avoid a long and useless discussion by others or a laborious explanation on my own part by a short story that illustrates my point of view." "No, I am not simply a story-teller, but story-telling as an emollient saves me much friction and distress." Oh, if only more of our business and government leaders would use short stories, saving us all some "friction and distress". The chapter titled "Persuade Rather Than Coerce" explains that Lincoln was smart enough to know that he couldn't do it all by himself, but needed capable leaders who were authorized to make decisions and act on them. His largest problem with military leadership was a gauntlet of generals who were not willing to assume that responsibility. Understanding that influence is a more effective tool of leadership than coercion or orders, he "...preferred to let his generals make their own decisions and hoped that, through his suggestions, they would do the right thing." That chapter begins with a quote from the first Lincoln Douglas debate: With public sentiment, nothing can fail; without it, nothing can succeed. Consequently he who molds public sentiment goes deeper than he who enacts statutes or pronounces decisions. Looking back at the presidents of my lifetime, it is easy to see which have taken this advice to heart, and have shown success because of it. Likewise, those who have ignored it, and a recent president comes to mind, ha

Published by Thriftbooks.com User , 21 years ago
Lincoln on Leadership tells the tail of one of the most influential presidents of American history. It's a quick read that really touches at the core of leadership and the man who exemplified the subject best, Abraham Lincoln. The way the book is titled makes you think that it was Lincoln himself who actually wrote it (this is not true). Although there's a good amount of writing by Lincoln in the book, the lessons are mostly interpreted by the author Donald T. Phillips, through actual historical events taken from the president's life in office. The author does a great job of extracting the jewels of leadership wisdom by analyzing Lincoln's actions. Lincoln on Leadership is not a step by step guide on leadership theory, it is more of a biography on Lincoln's life in office. If your looking for a thorough history on Lincoln don't bother, most of the items covered are during the Civil War, the time where Lincoln displayed most of his leadership abilities. The contents of the book are presented in four parts, each part breaks down into several sub-parts pertaining to the main topic:Part I - PeoplePart II - CharacterPart III - EndeavorPart IV - CommunicationI must tell you, after reading this book I am definitely interested in learning more about our sixteenth president (AKA - Honest Abe). Lincoln on Leadership helped me see the extraordinary attributes of an American legend. His honesty, integrity, and tenacity are all characteristics that should be mimicked by all students of leadership.Excellent job Donald...

Solid Leadership History of Lincoln During the Civil War

Published by Thriftbooks.com User , 21 years ago
This book purports to be about business leadership, and if you find it helpful for that purpose, good for you. The author clearly did. The genesis of this book project was an epiphany for the author while taking a management seminar and reading a history of Lincoln during the war years. He realized that the principles in the seminar were all ones that Lincoln employed.Each chapter explores one broad principle, and then lists subprinciples at the end of the chapter. These subprinciples will feel like leadership or management axioms to most. Few of the chapters have any reference to the management literature or to modern day management situations. But I found that okay. Whenever I read about Lincoln, I notice things about his leadership and management style that interest me, but I have never seen a book that focused on that element until this one. I thought it was useful to have a history that emphasizes just that slant. I think you will, too, unless Lincoln is someone you don't care for. The first chapter was especially interesting to me, because it talked about Lincoln's inclination to visit the scene and find out what was going on. There's a very interesting chart that shows how many days a month he was traveling during the war. The author makes a connection to Management by Wandering Around from In Search of Excellence that works.Everyone will have their favorite part of the book. The sections are divided into things about people, character, endeavor, and communication. I found the communications sections to be unusually good. As outstanding as Lincoln was in many areas, he was probably a better communicator than just about anything else. There is a chapter on public speaking, another on influencing people through storytelling, and one on getting your vision across. These are as timely today as they were in Lincoln's day.I think that this is the significant aspect of the book for us today: What was important then, that we still resonate to as important today? Whatever themes strike you that way are probably telling you something very fundamental about people and human organizations. Pay attention!One of the chapters that meant a lot to me personally focused on how Lincoln handled unjust criticism. He often ignored it, but other times he challenged it when it was harmful to the nation not to. The abuse heaped on Lincoln and his wife make today's TV headlines about politicians seem like nursery rhymes by comparison. We can all benefit from thinking about his experiences and how he handled them in this regard.The book's main weakness is that it makes Lincoln a little too perfect. He had a lot of weaknesses, as we all do. For example, I think a good case could be made for him not being a good judge of people considering the bad results he got from so many generals until he linked up with Grant. Anyone with an interest in Lincoln will like this book. If you also find leadership lessons

Published by Thriftbooks.com User , 21 years ago
Unlike some of the other reviewers, I didn't find this book to be a fast read - mainly because I often stopped while reading to relate the author's points to my own experiences. I also found myself wanting to reread some portions to fully grasp the ideas. Anyone who wants to improve their leadership skills should not only read this book but should also mark it up and underline key points and refer back to them periodically! I clearly came away with a much deeper respect for our 16th president.

Published by Thriftbooks.com User , 23 years ago
I found this book to be irresitibly readable and chock full of information and material immediately applicable to life and life in the business world. Mr Phillips does a wonderful job of illustrating leadership principles through Lincoln's style and approach to leading and governing. This method makes it extremely easy for the reader to understand the concepts being conveyed. If Lincoln was able to save the Union in the most extreme condition by use of these principles, it's easy to imagine that they could work in various other situations. Mr. Phillips doesn't ignore Lincoln's weaknesses, but uses them and how Lincoln tried to handle them as teaching material to demonstrate how leaders can be effective in spite of their personal shortcomings.In short, this is one of the more valuable, interesting, AND usable books that I have read in years. I have ordered "Leadership and the Founding Fathers" and hope to gain as much from that as I have from the Lincoln book.
Copyright © 2020 Thriftbooks.com Terms of Use | Privacy Policy | Do Not Sell My Personal Information | Accessibility Statement
ThriftBooks® and the ThriftBooks® logo are registered trademarks of Thrift Books Global, LLC