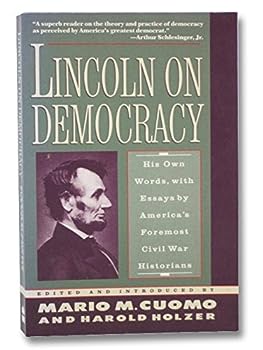 by Harold Holzer and Abraham Lincoln

This description may be from another edition of this product. This anthology of Lincoln's speeches, writings and conversations is the first to bring together the 16th president's views on liberty, freedom, equality, and self-determination. It documents the...

Published by Thriftbooks.com User , 14 years ago
This book is a wonderful collection of Abraham Lincoln's writings. Everything is included here, from private letters to public speeches, coving every possible subject from the right to strike, through slavery, and on to Lincoln's views of America. Overall, I found this to be a wonderful book. With the passage of time, Abe Lincoln has become less beloved by the establishment, and as such he is fading from the public view. But, this book does a wonderful job of bringing him back, and letting him speak for himself. I really enjoyed this book, and highly recommend it.

Published by Thriftbooks.com User , 17 years ago
This is a book of the highest caliber, making available in a compact and accessible form a set of speeches, letters, and other writings by President Lincoln that rank in importance with the Federalist Papers, speeches by the American founding fathers, and even to some extent philosophical works like Locke's *Second Treatise* and Rousseau's *Social Contract*. I have used this book in a course in American political philosophy from the founders to Lincoln and it worked perfectly (I also used *Lincoln at Gettysburg* and a single-volume abridged edition of the Lincoln-Douglas debates, of which only a few selections could be reprinted in Holzer and Cuomo's volume). *Lincoln on Democracy* badly needs to be reprinted, since no other work like it is currently available. The introductory essays and short intros to each section are by first-rate scholars, and are very helpful. This volume clearly shows the growth of Lincoln's thought from his roots in the Whig political tradition (with its emphasis on internal improvements paid for by taxes falling largely on the rich, free labor, and the supremacy of the federal government). When the Republican party began under Lincoln's guidance, it stood for almost the opposite of everything it stands for today. Lincoln also developed the crucial argument against slavery in the enlightenment natural rights tradition, arguing that the sovereign authority of a democratic government rested on moral presuppositions concerning the natural freedom and dignity of each human person, which, therefore, no legislature could validly violate in laws it makes without losing the authority to make laws at all. One also finds in this book source, such at the Letter to the Boston Republicans, that echo Emerson's and Hegel's arguments against slavery, namely that enslaving others distorts the master's own psyche by basing his self-respect on coerced rather than free recognition from others, thus implicitly denying his own right to liberty. In sum, I recommend this book wholeheartedly to any student of Lincoln's thought, both in politics and democratic theory.

Published by Thriftbooks.com User , 19 years ago
Lincoln on Democracy edited and introduced by Mario M. Cuomo and Harold Holzer is an anthology written by Lincoln, in his own words with essays by America's foremost Civil War historians. These include: Gabor S. Boritt, William E. Gienapp, Charles B. Strozier, Richard Nelson Current, James M. McPherson, Mark E. Neely, Jr., and Hans L. Trefousse.I found this volume to be very valuable in understanding, not only Lincoln's psyche, but that of the country as a whole. Lincoln has been called one of the best writers among the American presidents, even though his delivery was not as dynamic. This unique anthology includes such well-known selections as the Emancipation Proclamation and the Gettysburg Address, but that is only the beginning. As there are equally inspiring speeches, letter, notes and diary entries. Not to mention a revealing dream that Lincoln wrote down for posterity."Lincoln on Democracy" documents Lincoln as an extraordinary leader, taking him from a local politician to a national leader in time of crisis. The reaffirmation of Lincoln's commitment to the ideas of liberty and the savior of the union. This book is dedicated to the people of Poland as this volume was assembled at the request of the Solidarity teachers in a newly democratized Poland. There are seven chapters in this book dividing it into easily followed and logical order.They are: "The People's Business" Lincoln and the American Dream 1832-1852 "All We Have Ever Held Sacred" Lincoln and Slavery 1854-1857 "Another Explosion Will Come" Lincoln and the House Divided 1858 "Right Makes Might" Lincoln and the Race for President 1859-1860 "Hour of Trial" Lincoln and the Union 1861 "Forever Free" Lincoln and Liberty 1862-1863 "For Us the Living" Lincoln and Democracy 1863- 1865 This is a fully annotated collection also containing an extensive chronology linking Lincoln's life and accomplishments with the world and national events with photograghs from various periods in his career. The essays are written extremely well and set the tone of each chapter making this volume compelling as we reexamine our republic with Lincoln as our guide for the time period of this book.

The Rights of Man

Published by Thriftbooks.com User , 19 years ago
This is a great book for getting an overview of President Lincolns life in a chronological way. We learn how his thinking process develops as he encounters the diverse situations of his life and times. Through actual letters, speeches and business dealings we see the man. We find it is a man in the making. President Lincoln did not arrive full and complete in terms of philosophy. He developed his thesis of the rights of man as he lived the conflicts of his fellow citizens especially as it related to the slavery of the black man. A great book you must have in your personal library. A true resource for any student of civil rights and demorcacy in the western world. Makes a great gift for any student of history.Respectfully submitted by;Mark V. AarssenCanada

Published by Thriftbooks.com User , 24 years ago
Mr. Cuomo has put together a rewarding synopsis of several of A. Lincoln's Speeches and Writings. He added his own editorial content to make us better understand Mr. Lincoln's thoughts. This volume is easy to read and the themes are current for the times. Highly Recommended.
Copyright © 2020 Thriftbooks.com Terms of Use | Privacy Policy | Do Not Sell My Personal Information | Accessibility Statement
ThriftBooks® and the ThriftBooks® logo are registered trademarks of Thrift Books Global, LLC