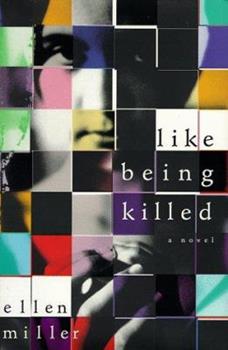 "I could never predict what was going to ruin me and what was going to rescue me..." Ilyana Meyerovich has never been very far from disaster and loss. A self-described " suicidal, strung-out,... This description may be from another edition of this product.

Ignore the negative review. This book is brilliant.

Published by Thriftbooks.com User , 16 years ago
The very negative review here pretty much defines why this book is so brilliant. "Just because your parents are off doesn't mean you have to go shoot heroin" it says, demonstrating a typical person's notion of Manichean dualism that Ilyana Meyerovitch (the protagonist) and Ellen Miller explode in "Like Being Killed". This book is about the torment of a sanitized, infantilized, paternalistic, cold, and cruel world for incredibly intelligent and sensitive people, and about the extreme means they will pursue to find some sort of pleasure and meaning within it. Unlike many books depicting female heroin addicts (those 'Just Say No' morons should realize that heroin has less effect on mental processes than alcohol, and was legal until the 1920's; it also is the close cousin to a medical miracle, morphine), Ilyana is incredibly intelligent, chooses her destiny (is not stereotypically 'lured into it' by a boyfriend, like so many writers pathetically depict female addicts), and (unlike the aforementioned review) does not ever engage in prostitution. If you are a judgmental, callous, and rather simplistic sort who loves to stigmatize and incarcerate all those who do not live Romper Room lives regardless of their depth and humanity as individuals, then avoid this book, as you will feel that you have been 'robbed'. If you are a person of depth, feeling, and intelligence, than you are in for the read of a lifetime

Published by Thriftbooks.com User , 18 years ago
Bill Green, Shaker Heights, Ohio. A harrowing story of love and loss and still loving, this novel is a gripping tale and an exercise in moral reflection perhaps best summed up in Neitzsche's remark, "From your poison you brewed your balsam." The poison is heroin--but heroin also as a metaphor of having and wanting, as applicable to everyday life as to a world of more obvious craving. Miller refuses to dissociate the vile and the virtuous. Hope has as much to do with the depths as with the heights of life. Redemption is no resolution but the heart and sheer fact of survival, which is assurance enough. Miller writes with the lucidity and concision of Kafka and the gusto of Nietzsche, with a compelling feel for everyday reality and sentiment. She speaks as easily of the pleasures of baking a pie as she does of matters so revolting as to turn away any with a weak stomach. This combination of brutal honesty and affection for the commonplace makes for what is surely one of the most unusual and thought-provoking novels on the market.

Published by Thriftbooks.com User , 18 years ago
It's a bit humbling to admit, but I've never in my life gotten more involved with a novel than this one. I began to pray, in the middle of my 'relationship', with, or more accurately my 'addiction' to, this novel, that it would pay off, it would look up and see the sun and not end as terribly bleakly as it begins. I imagined that if it ended badly, it could put me in bed for weeks, I was so involved. Well, it works out. It looks up. Overall, it was like putting on glasses for the first time, seeing a motion picture film for the first time, getting kissed for the first time. I hadn't known a book could be so vivid, could punch me square in the eye like this. I was wed to it, reading it in bed until long past 12, dodging phone calls, taking it with me everywhere.I will admit that I can see how some people could find the language overbearing and showboaty, a lot of big words are used, and it's occasionally annoying or disruptive. But overall, this is an amazing book. If you can take it. I want to say to the prospective reader, be careful! It'll change you. It's dark, gory, terrifying, and terribly honest.

Published by Thriftbooks.com User , 22 years ago
Ellen Miller writes eloquently and vividly. Like Being Killed is a page turner beautifully written. The story digs beyond the surface of a promiscuous, masochistic woman and her fetish for heroin. Social issues such as AIDS, sex, and addiction are intertwined with the story of a woman seeking self-sanction. Unsettling sex scenes with a sadistic plumber are graphic and austere. After reading this book, you will never look at a cucumber the same way again. Drugs are not glorified in this piece of literature; they are portrayed as truth-revealing components. Miller conveys realistic consequences to narcotic-related actions without imposing her morality in any way, shape, or form. Of course, Like Being Killed, has its problems. The friendship between main characters Susie and Ilyana is established weakly, and they seem to go from love to hate to love with one puff of the pipe. The ending is not as well-rounded as the reader hopes, but this attempt from a new writer is both promising and refreshing. Like Being Killed has to be one of the best books I have read this year. It is both profound and thought-provoking. It explores the essence of existence in a world filled with complex decisions, all the while delivering a large dose of humor. All in all, a great read.

You must not miss this book! It is a work of genius.

Published by Thriftbooks.com User , 22 years ago
Ellen Miller writes with sophistication and control. Her command of language and her use of vocabulary indicate that her extraordinary writing ability is a gift we (readers) will be receiving for many, many years to come. It's difficult to believe that Like Being Killed is her first novel--it reads as though Miller has published dozens of books already. If her first novel is this amazing, it's hard to imagine what experience and age will add to her future work. While her subject matter is difficult, emotional, painful, humerous, intelligent, complex and heart-wrenching, she handles all of it with confidence and a refreshing lack of sentimentality and self-indulgence. Ilyana, her narrator, is brilliant, addicted, and, at times, insane. But Miller tackles this enormous task of getting into the mind and soul of her narrator and forces us to join her there, to become Ilyana--a task that is daunting, yet made ultimately appealing because of Miller's powerful, bracing, and mind blowing talent. No one should miss this book.
Trustpilot
Copyright © 2022 Thriftbooks.com Terms of Use | Privacy Policy | Do Not Sell My Personal Information | Accessibility Statement
ThriftBooks® and the ThriftBooks® logo are registered trademarks of Thrift Books Global, LLC