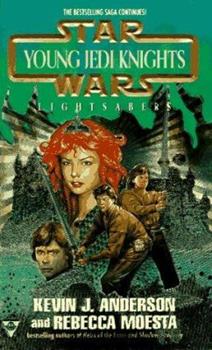 Jacen and Jaina--twin children of Han Solo and Princess Leia-- begin to learn the technical and spiritual skills they will need to use the ancient lightsaber against the Dark Jedi.

Published by Thriftbooks.com User , 14 years ago
Luke has decided its time for Jaina, Jacen, Tenel Ka, and Lowie to be trained with a lightsabre. Jacen and Jaina are a little cautious about taking up taking up a lightsabre after their experiences at Shadow Academy. Tenel Ka staying true to her charactor still prefers to rely on her phyiscal strength instead of the Force and ends up putting together her lightsabre too fast and rather recklessly. During a dueling practice with Jacen it comes back to haunt her and she's seriously injured. Uncertain if she wants to contiune her Jedi lessons Tenel Ka returns home to Hapes. Jacen, Jaina and Lowie go to Hapes to try and cheer her up and there's an assisination attempted on her grandmother. The Jedi must find out who is out to kill her grandmother. Once again another great story. Full of adventure, charactors that well fleshed out and each of them uniquely and wonderful.

One of the best in the YJK series!

Published by Thriftbooks.com User , 18 years ago
This is probably my favorite book in the young jedi knights series. Luke Skywalker decides that it is time for the Young Jedi Knights to build their lightsabers. he tells them not to rush, but after Tenal Ka finds out Lowbacca is almost done with his, she hurries to build hers. At a traning practice with Jacen, her faulty lightsaber beam 'disinagrates' and Jacen's cuts her arm off above the elbow. an explosion a moments later destroys her lightsaber and arm. Not wanting pity from the others Tenal Ka returns to the Hapes Cluster. her friends follow and soon learn about some assassination attempts on her grandmother. the Young Jedi Knights need to figure out who this assassin is, because soon their own lives are in danger. If your a Star Wars fan, GET THIS BOOK!

Published by Thriftbooks.com User , 19 years ago
I thought Lightsabers was one of the best of the series. I just read the entire first series again and am now reading starting the second series. I couldn't put the book down. It starts with the jedi knights (Jacen, Jaina, Tenel Ka, Lowie) constructing thier lightsabers. Each of them have to go get a focusing crystal. Even though Luke tells them not to rush into it and finish it in a day or two, Tenel Ka rushes through the process. During a practice session between Tenel Ka and Jacen, something goes wrong with her lightsaber and then a big accident accures which forces her to return to the Hapes Cluster. When Tenel Ka returns to the Fountain Palace, she finds out that her parents are gone and she is to stay with her grandmother Ta'a Chume. When Jacen, Jaina, and Lowie go to Fountain Palace an assasination attempt was made on Ta'a Chume and Tenel Ka. The rest is for you to find out.

My personal favorite of the YJK series!

Published by Thriftbooks.com User , 19 years ago
Written by the terrific husband and wife team, Kevin J. Anderson and Rebecca Moesta, the Star Wars Young Jedi Knights series are not to be missed! These series of books center on the young twins of Han Solo and Lei Organa, Jacen and Jacen, and their friends, Lowbacca and Tenel Ka, as they journey on the road to becoming Jedi Knights."Lightsabers", the fourth book of the YJK series, is one of my favorites! It begins where Luke Skywalker makes a hard decision. He decides to train Jacen, Jaina, Lowie, and Tenel Ka to use lightsabers. All four begin their work in constructing their weapons. But Tenel Ka, who relies more on her physical strength than in using the Force, isn't patient enough to make her lightsaber correctly. During a sparring practice with Jacen, to the shock of everyone, her lightsaber explodes and Jacen, caught off guard, (I won't give you the whole details), severes her left arm. Feeling terrible and not wanting to have pity from her friends, Tenel Ka leaves for the Royal Court of Hapes, where her grandmother awaits. But her friends go to her and try to comfort her. Tenel Ka doesn't know how to deal with the situation. With so many mixed emotions, she doesn't know whether she wants to continue her training at the Jedi Academy. As she sorts through her feelings, she and her friends must deal with an assassin whose prime target is... her grandmother, the Matriarch of the Royal Hapan Cluster!I must say that I just love the Young Jedi Knights! I really like all Star Wars books but this series one of my favorites for the reasons that, 1) the characters are very interesting and close to my age, 2) superbly and well written, and 3) all books are exciting and full of adventure. The four main characters of the books are well likable because each of them have their own personalities, characteristics, and quirks. Jacen with his love for all living plants, animals, insects, etc. Jaina with her mechanical ability and strong willed nature. Tenel Ka, the warrior and true friend. And of course Lowie, very courageous and strong. Also, readers will be able to get a glimpse at what is really going on between Jacen and Tenel Ka... :-)So I highly recommend you read all of the fourteen books in order. The series are divided mostly into three parts. The first six books are about the rising force of the Empire and its Dark Jedi Knights. The next five books are about how the Jedis must stop the Diversity Alliance. And the last three books are how the Jedis deal with Czethros and Black Sun. Another Star Wars series I very much recommend are the "Jedi Apprentice" series. Don't miss them!

One of my favorite books in the series

Published by Thriftbooks.com User , 21 years ago
When I read this book for the first time, I literaly could not put it down. Since then I have read it and the rest of the series many times over, and this book never loses it's flavor. The discriptions and characters were so vivid that I could see everything that was happening, and it felt almost as if I was there. Anyway, in this book, Luke decides Jacen, Jaina, Tenel Ka, and Lowie are now ready to build their lightsabers. The story goes into great but not tedious details as to how lightsabers work, which is something I have always wondered about. So anyway, Jacen, Jaina, and Lowie all build their lightsabers slowly and carefully like they are supposed to, but Tenel Ka rushes through hers so she can be the first one to finish, and then when she and Jacen spar, something terrible happens.... Part of why I loved this book in particular was that it had a lot of character development without compromising action, most especially in Tenel Ka who is the main focus of this story. I greatly enjoyed this, because Tenel Ka is definitly my favorite character in the series, because she is so strong and tough and doesn't let anything stop her, not even a crippling accident, and of course because she is a warrior princess. This book would be best if read after the previous three books in the series, though it can be understood on it's own too. The reading level of this series is not very high, just high enough to be above the 9-12 age range. Any Star Wars fan over the age of ten would probably like this book.
Copyright © 2022 Thriftbooks.com Terms of Use | Privacy Policy | Do Not Sell My Personal Information | Accessibility Statement
ThriftBooks® and the ThriftBooks® logo are registered trademarks of Thrift Books Global, LLC