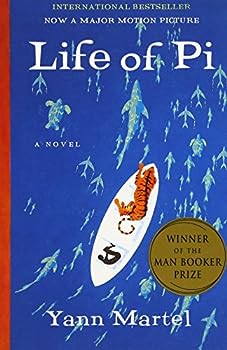 Winner of the 2002 Man Booker Prize for Fiction Pi Patel is an unusual boy. The son of a zookeeper, he has an encyclopedic knowledge of animal behavior, a fervent love of stories, and practices not... This description may be from another edition of this product.

Just couldn’t get into it

Published by Dustie , 1 year ago
I only read the first 2 or so pages. I kept re reading them but my mind kept wandering. It starts with info about zoology, guess that’s just not what I want to read.

Published by BookReader , 1 year ago
Ordered the acceptable version and came in better than expected. Had yellow pages but was otherwise perfect.

Inspiring and deeper than most high schoolers will understand .

Published by Amy , 1 year ago
Pi Patel, our main character, is a teenage boy when his family decides to move to Canada. They transport their family, their business of zoo animals for money in a Canadian zoo, on a ship across the ocean. When tragedy hits the boat, survival at any cost emanates us to act accordingly. In total, Pi and 5 survivors are in a small emergency boat with limited food and water. As death claims most, the survivors are stuck until something on the journey will give. It’s a very very good book .

life of pi is full of adventure, animal life, will to live, the value of improvisitation, and nature

A wonderful follow up and a superb work with its exuberant images.

Published by Thriftbooks.com User , 14 years ago
Canadian author Yann Martel's international bestseller Life of Pi was first published in 2002 and it was the recipient of the prestigious Man Booker Prize in that same year. In 2007 this work of fiction was reintroduced with a Deluxe Illustrated Edition that now includes dazzling illustrations contributed by Croatian artist Tomislav Torjanac of some of the most unforgettable scenes of the narrative. The narrative revolves around a most outrageous tale concerning a young boy, Piscine "Pi" Molitor Patel, who lived in Pondicherry, India. Pi's father was a zookeeper and as a result Pi learned a great deal about zoos and the diverse behavior patterns of the various animals. When Pi, who is a Hindu, reaches adolescence, he decides to experiment with different religions such as Christianity and Islam for he just can't figure out how to find God or for that matter, himself. Facing political oppression, Pi's father decides that he has had enough with the politics of Mrs. Gandhi and opts to leave India with his family for Canada. On the 21st of June 1977, Pi, who is now 16, together with his mother, father, and older brother as well as seven animals from his father's zoo begin the long trek to Canada on a Japanese cargo ship, Tsimtsum. Unfortunately, tragedy strikes and the cargo ship mysteriously sinks somewhere in the Pacific leaving Pi the sole human survivor- the result of being miraculously tossed into a lifeboat before the ship sank. However, Pi is not alone on the lifeboat. Joining him is a 450-pound Royal Bengal tiger, a zebra, a hyena, and an orang-utan. Pi, who now has front row seats, observes the survival of the fittest when the hyena demolishes the zebra; however, shortly thereafter the tiger devours the hyena. Pi, sensing the danger he is in, cleverly manages to avoid conflict with the tiger, which he has named, Richard Parker, by staying away from his territory on the deck of the boat. In order to survive, Pi manages to fish and feed himself as well as the tiger. Eventually, the two are washed ashore upon a strange island that apparently was formed with tightly knit edible algae. Pi meanders about and finds some strange fruit of containing human teeth in its center. He comes to the conclusion that it must have been a huge plant like organism that has previously gulped down a human. From here the pair find their way to Mexico, where the tiger leaves Pi. By the time Pi winds up in a hospital, we learn that he has survived 227 days from the day the Tsimtsum sank. How did Pi manage to live to tell the tale? Martel puts all of this into perspective when Pi is called upon to explain to the individuals investigating the sinking of the cargo ship. Torjanac was an excellent choice in breathing new energy into the now classic tale. It should be mentioned that Martel's English publisher came up with the idea of an illustrated edition and Martel was agreeable to the idea since in the past fiction authors as Jules Verne and Mark Twain

I Once Caught a Bengal Tiger This-s-s-s Big

Published by Thriftbooks.com User , 17 years ago
With over 1250 reviews already registered for LIFE OF PI, I first thought there could be nothing more to say about this marvelous novel. But after scanning the most recent 100 reviews, I began to wonder what book many of those reviewers had read. Had I relied on 98 of those reviews, I would have expected a far different book than the one I actually read. Let's begin with what LIFE OF PI isn't. It's not a Man against Nature survival story. It's not a story about zoos or wild animals or animal husbandry. It's not ROBINSON CRUSOE or SWISS FAMILY ROBINSON. It's not a literary version of CASTAWAY or OPEN WATER, and it's not a "triumph against all odds, happily ever after" rescue story. To classify it as such would be like classifying THE OLD MAN AND THE SEA as a story about a poor fisherman or MOBY DICK as a sea story. Or THE TRIAL as a courtroom drama, THE PLAGUE as a story of an epidemic, HEART OF DARKNESS as a story about slavery, or ANIMAL FARM as an animal adventure. Martel's story line is already well-known: a fifteen-year-old boy, the son of a zookeeper in Pondicherry, India survives a shipwreck several days out of Manila. He is the lone human survivor, but his lifeboat is occupied by a Bengal tiger named Richard Parker, an injured zebra, a hyena, and an orangutan. In relatively short order and true Darwinian fashion, their numbers are reduced to just two: the boy Piscene Molitor Patel, and the tiger, Richard Parker. By dint of his zoo exposure and a fortuitously positioned tarpaulin, Pi (as he is called) manages to establish his own territory on the lifeboat and even gains alpha dominance over Richard Parker. At various points in their 227-day ordeal, Pi and the tiger miss being rescued by an oil tanker, meet up with another shipwreck survivor, and discover an extraordinary algae island before finally reaching safety. When Pi retells the entire story to two representatives of the Japanese Ministry of Transport searching for the cause of the sinking, they express deep disbelief, so he offers them a second, far more mundane but believable story that parallels the first one. They can choose to believe the more fantastical first one despite its seeming irrationality (Pi is, after all, an irrational number) and its necessary leap of faith, or they can accept the second, far more rational version, more heavily grounded in our everyday experiences. LIFE OF PI is an allegory, the symbolic expression of a deeper meaning through a tale acted out by humans, animals, and in this case, even plant life. Yann Martel has crafted a magnificently unlikely tale involving zoology and botany, religious experience, and ocean survival skills to explore the meaning of stories in our lives, whether they are inspired by religion to explain the purpose of life or generated by our own psyches as a way to understand and interpret the world around us. Martel employs a number of religious themes and devices to introduce religion as one of mankind's primary filters

Amazing and symbolic - I loved this book

Published by Thriftbooks.com User , 20 years ago
I read between 50 and 80 books a year and it is the rare novel that does not disappoint me on some level. This book never let me down, I was never bored and I never felt the author cheated or left loose ends. The language was simple and lyrical but full of symbolism and symmetry. I loved the main character's honesty and optimism and his simple will to survive. Above all I loved the choice of an alternate ending, neither story is a perfect fit leaving the reader the choice to make up their own mind. I laughed, I cried and I'm recommending it to everyone I know.

Life of Pi Mentions in Our Blog 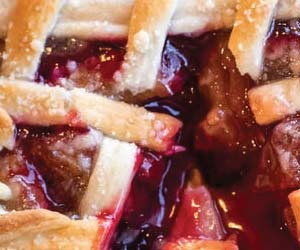 Celebrate #NationalPiDay with 3.14 pieces of your favorite pie (à la mode, according to our recent poll), 3.14 slices of your favorite pizza (pie), 3.14 chapters of The Life of Pi, or by seeing how many decimal digits of Pi (π) you can memorize and say aloud. (FYI, there are over a trillion, so hydrate first.)