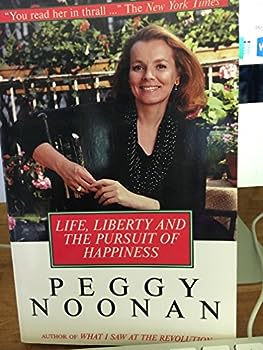 Life, Liberty and the Pursuit of Happiness

This description may be from another edition of this product. The author of What I Saw at the Revolution and a former speechwriter for President Reagan discusses her life after she left Washington--and the world of politics--in 1988. 75,000 first printing....

Published by Thriftbooks.com User , 12 years ago
Taking her cue from fellow Roman Catholic, Walker Percy, Noonan writes about the journey of life and the pursuit of truth in her impeccable style. She sees in her own life, and in the country, anxiety and depression, but urges the embracing of scared over sleepy. Anticipating Diana West by a decade, she sees America lacking maturity and being bored with asking and answering the hard questions. She closes the book with the astute insight that the real counterculture figures in America today are religious conservatives, be they Jewish or Christian. And in that subculture, she sees something promising. Noonan is a rare talent and always worth reading.

Published by Thriftbooks.com User , 17 years ago
It takes a while to adapt to Noonan's "New Yorkish, post-modern, stream-of-consciousness" style, but once you adjust it's fun. The whole book isn't that way, just large sections. Evidently that is the style designed to capture people brought up with short attention spans. If you expect a former presidential speech writer to have a gift of eloquence, you're not disappointed in Peggy Noonan. Her observations cause you to say "yeah, that's right" as she points out things you hadn't really considered. Noonan has lived the examined life, but in writing of one of her former employers (Ronald Reagan) she observed that the unexamined life actually IS worth living, contrary to the ancient philosopher's assertion. In this book, Noonan asks herself, as her readers peer into her private thoughts: "What do I want my life to mean? What do I want the obit to say, what do I want for the lead?" A similar observation is found in her comparision between individual giftings. On a social acquaintance she writes, "He thinks intelligence is a virtue when of course, it's not, virtue is a virtue, intelligence is a gift."She reminds us of the reality that Christianity is really for rebels. When society accepts it and tries to package it; it loses it's authenticity. Christians historically have been falsely accused, murdered, gone underground, and regardless of what pagans do to destory their faith, it grows stronger all the time. So she's not overly concerned that the social structure doesn't accept it. She says it helps it maintain its authenticity. After all Jesus Himself predict should treatment for His followers.You'll like this book if you're interested in both personal reflection and glimpses of cultural change. She combines macro and micro analyses in a colorful flow. Like a world class communicator should, she keeps the audience engaged

Published by Thriftbooks.com User , 19 years ago
For those enjoying Peggy Noonan, her thoughful essays of how her life evolved in the 1990's will be a delight. The topics are not especially political (although politicians are mentioned). The first part is about the lack of vision by Republicans that led to Clinton's election. The later essays, however, are mainly about personal transition, including that of being a single parent and returning to spiritual values.Much of this mirrors the evolving lives of the baby boomers as they grow up: the real story that occured quietly and behind the scenes and not in the flashier stories on the 1990's. However, those who are allergic to discussions of religion will probably hate it, as will those who hate Peggy Noonan for her political history.

Published by Thriftbooks.com User , 20 years ago
It is indeed a shame that this book is not currently in print. I first listened to this book in audio format, and I am still impressed today. Ms. Noonan thoughts are intriguing and resonate within me. A good book for luxury reading, I highly recommend it.

Published by Thriftbooks.com User , 24 years ago
Ah Peggy, how about an Irish book next? She writes like the wind she does. Her forays into spirituality mirror an entire generations search for a deeper meaning than the serial advertisements we are subjected to. I enjoy her honesty and wit and await the next..
Copyright © 2020 Thriftbooks.com Terms of Use | Privacy Policy | Do Not Sell My Personal Information | Accessibility Statement
ThriftBooks® and the ThriftBooks® logo are registered trademarks of Thrift Books Global, LLC