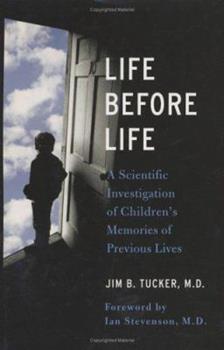 Life Before Life: A Scientific Investigation of Children's Memories of Previous Lives

by Jim B. Tucker

For the past forty years, doctors at the University of Virginia Medical Center have conducted research into young children's reports of past-life memories. Dr. Ian Stevenson, the founder of this work, has always written for a scientific audience. Now, in this provocative and fascinating book, Dr. Jim B. Tucker, a child psychiatrist who currently directs the research, shares these studies with the general public. Life Before Life is a landmark workone...

An Interesting, yet Scientific Look at Reincarnation

Published by Thriftbooks.com User , 15 years ago
Given my Lutheran upbringing, I've always been suspicious of claims of reincarnation. These feelings have been eroded lately with my study of Buddhism and a news report that I saw where a four year old boy clearly demonstrated memories of life as a World War II fighter pilot. As such, I was pleased to find this book. It's not your typical new age psuedo-science hodge-podge of anecdotal accounts, but rather is a legitimate scientific examination of the possibility of reincarnation, explored through children's accounts of past lives, usually starting around the age of 2 or 3 and fading around 7 or 8. Dr. Tucker has documented over 2,500 cases in countries all around the globe. He examines different types of accounts and attempts to address the various explanations for each. While a book like this could come off about as exciting as reading the Yellow Pages, Dr. Tucker takes care to discuss interesting individual accounts in addition to explaining the results of his studies. If you have an open mind concerning reincarnation, this book will raise your awareness and provide you with the information necessary to develop your own informed opinion.

Published by Thriftbooks.com User , 15 years ago
I am still reading it and have had trouble putting it down! I have many many books on this subject and most just left me feeling emply, needing more. This book is not that way! The people whose stories he write about glues you to the pages and make you reflect before reading on. This is the kind of book that can change the way we think about living and life in general. The messages are full of hope and give me peace of mind. SO many people THINK they are living but they are just doing that, living, going about daily taskes mindless NOT experiencing the Fullness that life has to offer. These Stories offered here open not just the heart but the mind as well and MAKE you think about why you are here and how you can improve life for others as well as your own..WELL WORTH THE READ!

FORTY YEARS OF UNIVERSITY RESEARCH ARE BEHIND THIS BOOK

Published by Thriftbooks.com User , 15 years ago
This book takes you methodically through individual cases of early childhood memories of past lives. These cases are thoroughly and professionally documented, researched and objectively judged as plausible or not...all in a scientific manner. More compelling proof that reincarnation exists.

Published by Thriftbooks.com User , 16 years ago
Dr. Tucker has produced a sensible, straightforward book packed full of real-life evidence. With an easy narrative, he explains how quantum physics makes the possibilities real. There are more than forty years of research of over 2,500 children, in which Dr. Tucker gleams stories, both coincidental and precise, to support the very possibility of reincarnation. Dr. Tucker was trained as a pediatric psychiatrist and takes a very fresh look at this contentious subject. The book is very pragmatic and scientific in its approach of the subject. Some of the stories will make your hair stand on end, but one gets a real sense that reincarnation is not fantasy, but reality.

Published by Thriftbooks.com User , 16 years ago
In "Life Before Life," Dr. Jim Tucker, successor to Dr. Ian Stevenson at the University of Virginia Division of Personality Studies, presents their work in a way that is rigorous enough for the scientific community, and yet readable by the lay audience. Dr. Tucker's approach is disarmingly straightforward, as he rationally examines all sides of the issue. In a non-threatening manner, he presents evidence which, if taken seriously, is inherently radical. Where I would characterize the stance of mainstream science with red flags like "in denial," Dr. Tucker calmly acknowledges that mainstream science is by nature conservative; where I would say something like "reincarnation has been proven, already, let's get on the stick," Dr. Tucker carefully explains what the alternative interpretations are, the extent to which they are plausible, and the extent to which they probably are not. If it were possible to convince mainstream science with a calm, rational, non-threatening explanation, this book would do it. To borrow from something philosophy professor Dr. Robert Almeder told me when I interviewed him for "In Another Life," if it were possible to calmly and rationally explain to a man that his brother is a murderer, without his going into denial and ridiculing you, then Dr. Tucker is the man who could do it. In short, the information is here. The work has been done, and the results are in. To use one of Dr. Stevenson's own analogies, the tennis player has hit the winning shot, and it was in-bounds. Now it is up to the scientific community, and the society at large, to come to grips with it. In order to do that, they will have to admit that much of our currently-accepted philosophy is wrong, psychology is wrong, genetics is wrong, and much more. It's like the 75-cent accounting error that leads to the international hackers--if the materialistic view of the world is correct, this research simply shouldn't be there. But it is, and Dr. Tucker is just sitting down with you on a fine Sunday afternoon with a glass of tea, and telling you. (If you don't cup your hands over your ears and say "yah, yah, yah," though, you may spill your tea.) One of the subtle points that Dr. Tucker makes several times in this book, addresses the various objections to the work that have been put forth by skeptics. He points out that these alternative explanations, what he terms the "normal" explanations, may (if stretching) fit the facts of a particular class of cases, but not all. Another such explanation may fit another class of cases, but again, not all. If the cases are taken as a whole, however, then these explanations aren't adequate. In other words, one has to isolate out a group of cases while deliberately ignoring others, in order to infer that these explanations are reasonable, because the cases one is ignoring would invalidate the explanation. Similarly, Dr. Tucker points out that if there exists an adequate number of extremely strong cases, then by inference, most
Trustpilot
Copyright © 2022 Thriftbooks.com Terms of Use | Privacy Policy | Do Not Sell or Share My Personal Information | Accessibility Statement
ThriftBooks® and the ThriftBooks® logo are registered trademarks of Thrift Books Global, LLC