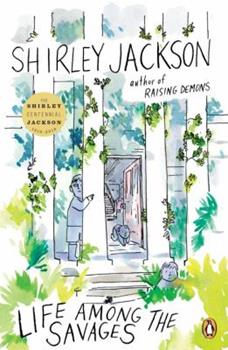 Life Among the Savages

(Book #1 in the Jacksons Series)

In a hilariously charming domestic memoir, America's celebrated master of terror turns to a different kind of fright: raising children--a lighthearted gift for your literary mother on Mother's Day. In her celebrated fiction, Shirley Jackson explored the darkness lurking beneath the surface of small-town America. But in Life Among the Savages , she takes on the lighter side of small-town life. In this witty and warm memoir of her family's life in rural...

If tamed, LOL so high it could replace internal combustion..

Published by Thriftbooks.com User , 17 years ago
."Our house is old, noisy and full. When we moved into it we had two children and about five thousand books; when we finally overflow and move out again we will have perhaps twenty children and easily half a million books . . ." This is the beginning of the curiously powerful--and stealth-assault funny--LIFE AMONG THE SAVAGES (1952), memoirs of a Mommy, a Daddy, and a powerhouse-ful of children who give up post-World War II's overcrowded Manhattan housing market for roomier digs in a remote Vermont town. These are certainly life-with-kids family memoirs of the late 1940s and early 1950s, but to leave it at that would miss the point--like saying that Shirley Jackson's short story "The Lottery" is an anthropological study of a ritualistic New England town, or that THE ADVENTURES OF HUCKLEBERRY FINN is a treatise on rafting the Mississippi River before the Civil War. The author of LIFE AMONG THE SAVAGES is, in fact, Shirley Jackson, and this is the first half of her two comic novels about life with small children. (The latter half being the later, and unfortunately more difficult to find RAISING DEMONS, published in 1957.) I'm not revealing too much to pass on that the hick town just happens to be Bennington, Vermont, the one with the all-female college; and that the harried Papa taught there. And when Mommy climbed into bed late at night "with a mystery" there's a good chance she was working on one of her own stories and a portable typewriter, a pack of cigarettes and a snifter of brandy climbed into bed with her. In LIFE AMONG THE SAVAGES, even the most please-don't-eat-the-daisies events usually hide a shiv or a shiver somewhere amidst the sitcom. When the financially strapped family scrapes up enough cash for some day help, they interview and hire an escaped felon; later they tangle with a motorcycle mama, the ultimate Effie Klinker of negative IQ, and an over-the-top fundamentalist who frosted her cookies with "Repent, Sinner." Not to mention: "From the girls' room, small voices rose in song, and I listened happily, thinking how pleasant it was," reminisces la Jackson. "[Just later] I was out of bed in one leap and racing down the hall. 'Baby ate a spider, Baby ate a spider,' was what they were singing." Maybe it's just the mixed blessings of heredity--and all those thousands of books--that the marriage of a college professor and a celebrated author would produce a growing family of kids so bright, inquisitive, creative, and, um, let's call it individualistic. "I frequently call [daughter Jannie] Anne and her father very often calls her Jean. Her brother calls her Honey, Sis, and Dopey, Sally calls her Nannnie, and she calls herself, variously, Jean, Jane, Anne, Linda, Barbara, Estelle, Josephine, Geraldine, Sarah, Sally, Laura, Margaret, Marilyn, Susan, and--imposingly--Mrs. Ellenoy. The second Mrs. Ellenoy. . . [M]y husband . . . is addressed in all variants of father from Pappy to Da, even--being a man not easily th

Published by Thriftbooks.com User , 17 years ago
Shirley Jackson NAILS the atmoshpere of family life... the strange quirks of children that are accepted as normal by parents who are both good natured and over whelmed by the unending demands of parenthood and the mysterious events that happen in every family --- like where did the pink blanket go?

A funny look at family life in the 40's. Still a great read!

Published by Thriftbooks.com User , 22 years ago
This book entertained me as a kid and as an adult. I'll be sharing it with my kids. The book focuses on the life of a family growing up in the 40's. It is written by the great writer, Shirley Jackson. The comedy rivals Erma Bombeck's and the stories are funny, heartwarming and clever.

Published by Thriftbooks.com User , 23 years ago
I generally hate domestic plots or cutesy toddlers but Shirley Jackson, with her wry sense of humor, helped me to really like this book. Sure, it is outdated but many of the absurd situations and attitudes still apply and it gives you a good middle class view of that period. Recommended!

Published by Thriftbooks.com User , 23 years ago
At one time, Shirley Jackson was both the scariest and the funniest writer in America. This book may come as a surprise to fans of "The Lottery", but don't neglect it on that account; it's still vintage Jackson, complete with a rambling old house (this time not haunted). This is hands down the funniest book about raising children ever written; somehow it manages to treat children as surreal and other (the savages of the title) without ever being condescending. The sequal, _Raising Demons_, isn't quite as good, but is still well worth the read.

Life among the Savages Mentions in Our Blog 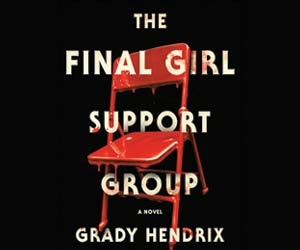 Grady Hendrix's newest novel, The Final Girl Support Group has been hitting all the bestseller lists and it's easy to see why! The horror thriller inspired by 1970s and '80s slasher films is certainly a page-turner. Described as having a style that is "equal part tender and terrifying," Hendrix is certainly one to watch.