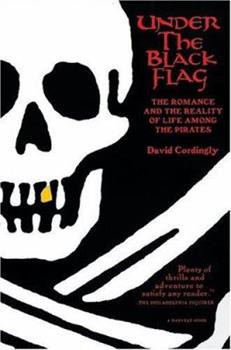 Under the Black Flag: The Romance and the Reality of Life Among the Pirates (Harvest Book)

"This is the most authoritative and highly literate account of these pernicious people that I have ever read." -- Patrick O'Brian Pirates are so much a part of legend that it is easy to forget they actually existed. UNDER THE BLACK FLAG tells their story in a rollicking account of the golden age of piracy that is packed with history, anecdote, and above all adventure. Here are the true stories of such bloodthirsty legends as Blackbeard and Captain...

A Pirate's Life For Me

Published by Ravenhoot , 2 years ago
This is one of my favorite books about pirates. I first discovered it in the research library of the Beaufort NC Maritime Museum and had to have it. If you enjoy reading about pirates, you'll really enjoy this.

Published by Thriftbooks.com User , 15 years ago
The biggest thing that made me nervous about this book beforehand was that the author, David Cordingly, was the former director of the National Maritime Museum, and those types can be long-winded. However, this book clocked in at only 224 pages (excluding the Appendices), so it didn't go long enough to drag. Obviously you're interested in the genre of pirates if you're looking at this book, and I personally think it is a gem. It covers all of the areas that you want to hear about: the drinking, the debauchery, the plundering and all of the other gruesome and glorious aspects of life at sea. However, instead of just perpetuating myths, this one actually goes about proving and disproving them. One of the highlights for me was reading all of the personal accounts of pirate attacks, trials and such, still in its original language. Cordingly actually quotes these people as they wrote it at the time, for example "We being attacked by ye pyrattes and therefore fell under duress" instead of the author translating that to "we were attacked by pirates and got scared", it really helped the feel of the book. If you're not a pirate scholar but are interested in the subject and would like to learn a few tidbits to impress your friends, I don't think you'd find a better means of doing so than "Under the Black Flag".

I liked this book!

Published by Thriftbooks.com User , 16 years ago
I liked David Cordingly's "Under the Black Flag: the Romance and the Reality of Life Among the Pirates." The sea terms glossary was useful: I didn't know that "pink" and "snow" were types of sailing ships. I like my books to have a bibliography, a table of contents, a list of illustrations, and be indexed so that I can find citations rapidly-Cordingly also put in four appendixes, documents supporting his thesis. Pirates have been around since before recorded history. Pirates prey on society-they cannot exist without prey. Pirates are still active today-especially in the Far East. Cordingly mentions them (publication date is 1995)-my personal experience is that pirates are still a problem for security professionals. "Under the Black Flag" explores both fact and fiction. The romantic image is examined through books, plays, and movies. Captain Hook from "Peter Pan" and Long John Silver from "Treasure Island" are said to be the two most famous pirates. The historical pirates included the Chinese pirate queen Cheng Shih, Molly Read, Anne Bonny, Henry Morgan, Blackbeard, Captain Kidd, and Sir Frances Drake-to name the most notorious and famous. Some, such as Drake, became national heroes and were made legitimate. Others, such as Captain Kidd, were railroaded. The Blackbeards earned every bit of notoriety. How did the pirates live-and die? My "day job" is working as a supply technician for the Nevada Army National Guard, and while on active duty I was an Army intelligence analyst-so details on how the pirate ships were kept in good repair and provisioned were right up my alley. Most pirate loot was hardware, food, sail cloth, and other such items that kept their ship afloat and their crews alive (if not healthy). As with pirates and terrorists and other criminals today, pirates survived because there was no concerted effort to eradicate them, because corrupt public officials and governments nurtured them, and because it wasn't really worthwhile for the large commercial corporations to pull the plug. "Under the Black Flag" does record instances where piracy suppression operations occurred, and Cordingly expresses surprise at how rapidly the pirate menace abated. No mystery to me-pirates live a precarious existence. Any number of things can go wrong. Pirates are never a match for a real navy-because navies do not have to subsist off of plunder. Cordingly records that in 1720 there were perhaps 2000 active pirates (a guess-pirates didn't submit to a credible and official census). Total pirate ships was low, with an average of 80 pirates per crew-so there were about two dozen pirate ships. The year 1720 was a peak of pirate activity. When the Royal Navy dispatched a dozen or so warships specifically for pirate suppression, issued amnesty to those who would give up piracy, closed pirate havens, organized merchant convoys, placed bounties on captured pirates, cracked down on corrupt government officials who supported piracy, a

Footprints of a Wooden Leg.

Published by Thriftbooks.com User , 17 years ago
"Under the Black Flag" is a real pirate's treasure. For all those who want to know what was "real" and what "romance", here's your book. Mr. Cordingly has performed a deep research on the subject and presents it in a very readable and interesting form. He has taken diaries, contemporary newspaper articles, personal letters and memoirs as a solid backdrop. His study is centered mainly in the Caribbean theater, the East coast of North America and the Indian Ocean. He also gives glimpses of the Chinese pirates leaded by Ms. Cheng. Every main issue is described: weaponry, tactics, vessels, flags, everyday life, treasures, pets and battles. In its pages you'll find the life and deeds of famous characters as Henry Morgan, "Blackbeard", Captain Kidd, L'Ollonais, Calico Jack and many others not so well known. A whole chapter is dedicated to women pirates including the adventures and misadventures of Mary Read and Anne Bonny. Finally "romance" is addressed taking into account mainly movies on the subject. As a bonus the book includes six maps of the different scenarios of pirate's campaigns; a glossary of sea terms; an extensive bibliography and several appendixes on relevant matters. So brace yourselves and come aboard! Reviewed by Max Yofre.

Published by Thriftbooks.com User , 19 years ago
Probably one of the best overall books on the subject of piracy, myth and reality, that I have read. Cordingly covers the history, the movies, the books, the truths and the untruths. He covers the pirate havens, common practices, origins, the big names and little names. Not just a dry narrative, but a fun read.If you were to buy one book on the topic of piracy, this should be it (Angus Konstam's History of Pirates would be next in line). It is a must for any budding pirate historian. P-)

The most accurate and best researched book on pirates

Published by Thriftbooks.com User , 21 years ago
David Cordingly's "Under the Black Flag, The Romance and the Reality of Life Among the Pirates" constitutes the best researhed book on pirate history I have ever read. The information provided about the lives of this notorious anti-heroes, the reality of the life among them and the world of the seventeenth and eighteenth centuries is amazingly accurate, and backed up with an extensive bibliography and footnotes. For those interested in pirate history throughout the ages, and specially the Golden Age of Piracy, this book constitutes a fundamental tool for understanding the pirate reality. When uncovering how the real people like Edward Teach and Calico Jack were, this book has no equal. Cordingly separates the myths from the real individuals behind them, proving that the reality is much more interesting than the romance, when uncovered. At the same time, the author discusses how the myths surrounding Blackbeard, the Women Pirates or Kidd's treasure, were formed and have survived through the years, becoming important elements of popular culture. Cordingly establishes why in our hearts, pirates were not sadistic villans, but rather "...romantic outlaws living far from civilization on some distant sunny shore," something most of us would dream to be.
Copyright © 2020 Thriftbooks.com Terms of Use | Privacy Policy | Do Not Sell My Personal Information | Accessibility Statement
ThriftBooks® and the ThriftBooks® logo are registered trademarks of Thrift Books Global, LLC