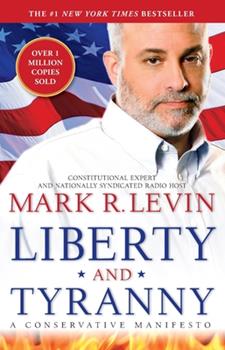 Liberty and Tyranny: A Conservative Manifesto

Your Liberty Is At Stake...It's Time to Rise Up and Defend It...But BE CAREFUL If You Do

Published by Thriftbooks.com User , 12 years ago
I thoroughly enjoyed Mark Levin's book and I agree with all of the excellent points that others have so eloquently described. Levin is an outstanding writer who communicates the Conservative Manifesto extremely well. However, I'd like to point out in this review that Mark Levin earns 5 stars in achieving a wake up call for me to get involved in what is happening politically in America, which I believe was his intended purpose. Levin makes it very obvious that the liberal agenda is one of Tyranny and it must no longer be viewed as anything but intentional. It is no longer a benign cancer, but active and aggressive and if left alone, fatal to America. If you are a skeptic of Constitutional conservatism, then it is important for me to note that this book provided a very intelligent and gentle awakening for me. Levin carefully points out what, where, why, and how leftist progressives have removed true liberty from the general populous of America and increase the size of the government such that we no longer have any significant self determination over our lives and careers. The Liberal's plans to turn America into a Socialist State has moved us directly toward Tyranny. Barack Obama, Harry Reid, and Nancy Pelosi's attack on the U.S. Constitution is now very plain to see. Levin has awoken Patriotism in me like I've not had before, even though I had been career military. I've joined a local Tea Party group and this book has become an essential part of this grassroots movement of people who are eager to once again defend our inalienable right to Life, Liberty, and the Pursuit of Happiness. I believe Mark Levin's book is needed by all Americans, so we will all know when our Constitutional rights are in jeopardy. Then we can rise up and become a "Mighty Force" in defending Liberty and defeating the tyranny of Socialism. However, as you do begin to speak out and take action to defend Liberty, there is a very high chance that those who embrace social governmental control (and the removal of our U.S. Constitutional rights) will become offended. And, because they don't have a high regard for following laws (because they equate liberty with the freedom from moral discipline), they might try to accuse you of false wrong doing (i.e. lie about you and perhaps call you a racist) and otherwise try to harm your reputation. Therefore, I would highly recommend getting another book called, Wild West 2.0: How to Protect and Restore Your Reputation on the Untamed Social Frontier. As a Patriot, it is inevitable that you will run across people who will try to ruin your online reputation. This book tells you exactly where to look for the problems that Liberals might cause and then how to repair them.

The case for liberty

Published by Thriftbooks.com User , 13 years ago
Mark Levin has taken the principles of America's founding fathers and applied them to the pressing issues of the day (free markets, government spending, national security, and the environment) to make a compelling case for less government and more liberty. He shows how the inevitable end of ever larger government is tyranny. It is rare that a book about political philosophy can be made as interesting and accessible as this one. I would recommend this book to conservatives, as well as to independents or progressives who want to understand the conservative way of thinking.

Published by Thriftbooks.com User , 13 years ago
Levin's latest sounds a clarion call to all Americans to embrace our conservative heritage. In clear and concise language, this instant classic shows how "statism" has undermined the foundations established by the Founding Fathaers and why conservatives need to become more active. A must read for anyone who is concerned with the direction of our country.

Published by Thriftbooks.com User , 13 years ago
This book is perfect for the individual who has always "felt" conservative, but couldn't quite explain herself. Mark Levin's "Liberty and Tyranny" begins with an excellent overview of where our country is as a constitutional republic and how we got here. He then states clearly his book's theme and rallying cry -- Conservatives must know the philosophical foundations for the principles they purport to advance in order to defend liberty from the "soft tyranny" of modern liberalism. Levin goes on meticulously (many more than 300 endnotes), but plainly explaining the principles of classic conservative philosophy of "prudent" progress, a government that is subservient to the people (rather than the other way around), the fundamental truth that rights are not derived from the government but from a higher power, that the free market system more than any other in history provides the best, most efficient and most just opportunity for individual prosperity as well as for the general welfare, and much much more. Levin's book provides ample evidence of government encroachment on individual liberty and our country's descent into the soft tyranny warned of by Alexis de Tocqueville in our country's earliest years. Economic regulation, environmental extremism, the usurpation of representative government by the judiciary, unprecedented and uncontrolled illegal influx of people into out country, and the like threaten our economic viability. Finally, Levin's book details how the liberal (and some so-called conservative) political elite rejects the notion of American Exceptionalism and seek to surrender voluntarily the sovereignty our forefathers fought and died to give and to preserve for us. This is a must read for those who wish to understand, defend and advance Conservatism

THE Voice for our Times

Published by Thriftbooks.com User , 13 years ago
Finally, someone is able to encapsulate the current mess the US is in into a succinct, comprehensive thesis that explains not only where we are, how we got here but, most importantly, what to do about it. An engrossing read that introduces new terminology in the use of the word 'Statist' instead of 'Liberal' to better pinpoint the mindset and agenda of the far left (as they have strayed so far from the path that to call them liberal is to insult true liberals everywhere). Mark Levine deserves two thumbs up, five stars, and a Medal of Honor for telling it like it is. Rebecca Melvin, author of In the Brief Eternal Silence
Trustpilot
Copyright © 2022 Thriftbooks.com Terms of Use | Privacy Policy | Do Not Sell or Share My Personal Information | Accessibility Statement
ThriftBooks® and the ThriftBooks® logo are registered trademarks of Thrift Books Global, LLC