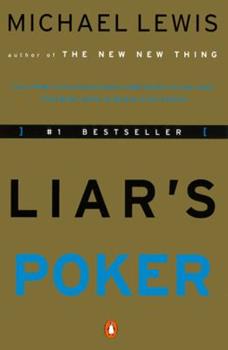 Liar's Poker: Rising Through the Wreckage on Wall Street

Michael Lewis was fresh out of Princeton and the London School of Economics when he landed a job at Salomon Brothers, one of Wall Street's premier investment firms. During the next three years, Lewis... This description may be from another edition of this product.

Published by James Benson , 7 days ago
Why struggle with bad credits when you can actually get them fixed within a couple of days with HACK VANISH, a professional hacker who has aided me in various ways, he fixed and increased my FICO credit score to a whopping 786 across all three bureaus, tracked my cheating wife calls, and also gave me access to all her social media accounts. HACK VANISH also specializes in recovering lost cryptocurrencies for victims of binary scams. Reach out to him today for help on WhatsApp: +1(747) 293-8514 or Email: HACKVANISH @ GMAIL. COM Thank me later.

Captures the essence of the culture

Published by Thriftbooks.com User , 20 years ago
In Liar's Poker, Michael Lewis writes about his journey in becoming a bond salesman and his two years of work experiences at Salomon Brothers. While the book does offer some information about the finacial innovations driving the bond business in the 1980s, I think the principle thrust of the book is an examination of the culture and the personalities of Wall Street trading desks. The first chapter story, which is the basis for the title of the book, involving John Gutfreund and John Meriwether encapsulates the nature of this world.This book is an important read for anyone who thinks they might want to become a trader/salesperson on Wall Street. If not, it is still a very interesting peek into a world that most people do not understand.My last comment is a minor criticism of Michael Lewis. Lewis writes in the first person and is obviously a very self-involved individual with an extremely high opinion of himself. This is more evident in his later writings and columns for various periodicals (e.g. his NY Times article on Long-Term Capital was sickening). Despite this criticism the book is still very enjoyable.

For all aspiring Investment Bankers!

Published by Thriftbooks.com User , 22 years ago
Almost everyone who is graduating is tempted by the glamour and large bonuses of Investment Banks to wonder what it would be like to work in a large investment bank on Wall Street and actually consider it as a serious career option. LIAR'S POKER provides an irreverent, bird's eye view of the whole process. This is an extraordinarily funny but thought provoking account of a money focussed guy's innings at a venerable Investment bank Salomon Brothers, starting as a $48,000-a-year trainee in 1984 to go on to become an institutional bond salesman in Salomon's London office earning $225,000 in 1987. Far from just being entertaining the book gives lots of insight into the intense cutthroat investment banking industry and makes it accessible for even the naivest of readers the intricacies of the milieu. An insider's look at the inside of an investor banking firm, with no holds barred, which makes it probably one of the most recommended books for anyone considering more than a passing acquaintance with the investment banking industry.

Published by Thriftbooks.com User , 23 years ago
What a great read. A friend of mine recommended this to me and I can say that it certainly was a refreshing read.This book tells you about some of the influential people who shaped Salomon Brothers and Wall St in the eighties. I never realised the history that went with Salomon Brothers.The style is great and I can really identify with the author's early years going through the stages of obtaining and starting a job. Some of the characters in the book are hilarious, you can only just believe they are real.Only one complaint: sometimes the author goes on for quite a long time with his history e.g. the history of junk bonds and the history of various people in SB. I only wish that there was more about the author's story.Only one gripe though, and it can't prevent this from being a 5 star book.Buy it now! Thanks to the book, I am now constantly searching for books like this but this is the only one I have found recounting the story of a salesman as opposed to a trader.

Published by Thriftbooks.com User , 26 years ago
**** I read this book in my last undergraduate year of college. At that time, Lewis provided me with an eye-opening, first-hand glance of life in the high-flying world of finance (1980's) and the personalities that drove that period forward. It was relevant reading material since I was intending to pursue a career in the financial services industry, and here was a book written by a former bond salesman in the New York and London offices of Salomon Brothers. **** Nevertheless, this book is not limited to only those interested or involved in the world of business. This book is for anybody who is curious how the S & L crisis emerged; how the Reagan administration's deregulations affected the salaries of a select few in the US financial industry; how much the tax burden of the average American citizen grew as a result. This book is perfect for those who dislike the dry writing found in historical textbooks. **** Lewis's anecdotes will leave you in stitches! I am now working in the financial services industry. Most of the people I run into seem to have read this book at an earlier age and most enjoyed it as much as I did. **NOTE** Other "financial history" books that could be compared to "Liar's Poker", but written with very different writing styles: "Merchants of Debt" by George Anders; "Barbarians at the Gate".
Trustpilot
Copyright © 2022 Thriftbooks.com Terms of Use | Privacy Policy | Do Not Sell or Share My Personal Information | Accessibility Statement
ThriftBooks® and the ThriftBooks® logo are registered trademarks of Thrift Books Global, LLC