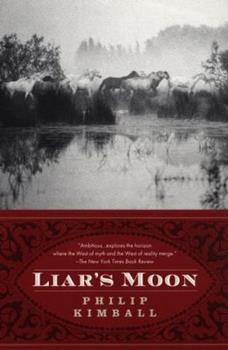 A boldly imagined novel of the West in the years following the Civil War.It's 1852 and a young girl in Texas is kidnapped by Indians. It's 1859 and two toddlers fall off a buckboard heading west:... This description may be from another edition of this product.

Liar's Moon is a literary treasure!

Published by Thriftbooks.com User , 22 years ago
When I initially read the book jacket, I thought it might be a good read, but I didn't immediatly buy it. Being born and raised in Philadelphia, I hadn't really felt any kinship with the Old West. Every trip thereafter to the bookstore, brought me back to the shelf where this book lay. Each time I would pick the book up and read a page or two, still not entirely sure. I thought it kind of eerie that each time I was called to that book. I was meant to read it. I was completely taken in after the first chapter. I read a chapter each day, savoring each one. After reading the entire book, I was sad it was over, it shouldn't end so soon. This is American folklore at it's best. Though folklore, it's an opportunity to reflect on our history, the way things were, or could have become. Philip Kimball deserves an award for this work. I'm happy to discover this treasure for my collection. It belongs with my Hemingways and Faulkners.

A Humorous and Poignant Description of the Old West

Published by Thriftbooks.com User , 22 years ago
Kimball puts a new spin on folklore to serve up a quirky tale of the opening of the old West. The characters are an odd collection of common folk, each with a story that is more peculiar -- and enjoyable -- than the last. Throughout it all is a sense of resignation that an era is passing and a way of life is quickly fading away.

A novel with poetry in every line.

Published by Thriftbooks.com User , 22 years ago
Liar's Moon is a joy from the first page. Filled with gripping tall tales, it is also beautifully written. A combination of oral folklore and down-to-earth realism unlike anything I've read before. I highly recommend it to anyone who wants to feel the wind on the prairies again--or for the first time.

Published by Thriftbooks.com User , 22 years ago
This is story telling at its best. Kimball weaves a captivating tale of the Old West, combining original stories and characters with legends. He weaves intricate scenarios then stretches them as tightly as an artist's canvas. Once readers start down the descriptive path of this novel, they'll become entangled until the last word.

A Fresh Look at an Old Story

Published by Thriftbooks.com User , 22 years ago
I would have thought that by now it would be impossible to write anything interesting and new about the settling of the American West. However, Kimball does just that. The way he tells a unified story from so many different angles is brilliant and engaging. As the novel progresses to its conclusion, the reader can feel right along with the characters how the eastern expansion starts to (literally) fence in the frontier. I've always enjoyed reading Cormac McCarthy's treatment of the same topic, but I enjoyed this book even more.
Trustpilot
Copyright © 2022 Thriftbooks.com Terms of Use | Privacy Policy | Do Not Sell or Share My Personal Information | Accessibility Statement
ThriftBooks® and the ThriftBooks® logo are registered trademarks of Thrift Books Global, LLC