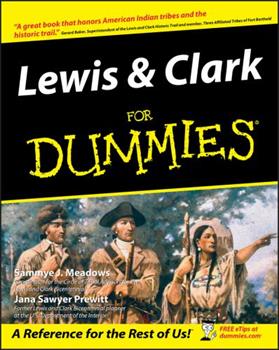 The Lewis and Clark expedition was the greatest camping trip in history. It was one of those irresistible American adventures that many people dream of living. This book shares the delightful details of the journey that historians have gleaned from the group's journals and maps, and also discusses what's known of the Indian perspective of the expedition. Throughout the book, you find out about Jefferson's western exploration from his earliest efforts...

A great read about a great expedition

A refreshing perspective on history.

Published by Thriftbooks.com User , 17 years ago
Lewis and Clark for Dummies succeeds in providing a sense of reality to the romanticized version of the Lewis and Clark story. This book demands that we understand that there is an essential perspective that has been missing from the historical record and the truth is not complete without it. The perspective of the American Indian and the role that their cultures and civilizations played are only known through the limited interpretation of Lewis and Clark and their own language and culture. This recognition is remarkable because it makes everyone human and highlights the limitations that come from one point of view. Unfortunately, Sakakawea and York were not able to provide their own personal reflections. 200 years is not a long time. There are still many stories remembered by tribal elders that could add volumes and provide a new understanding of the world that Lewis and Clark visited. This book reminds us that there is still much to be known and that there is more than one side to a version of history. It is refreshing to read an objective overview of the Lewis and Clark story rather than another reinterpretation of the Lewis and Clark perspective.

Finally, some perspective on Lewis and Clark

Published by Thriftbooks.com User , 17 years ago
It may have taken 200 years, but finally comes some perspective on Lewis and Clark. What a welcome and accessible contribution to the body of scholarship on Lewis and Clark, perhaps (after Thomas Jefferson himself) the most enigmatic men of their age. And from such an unexpected quarter. This volume raises the "Dummies" series to a new level of sophistication. The authors present Lewis and Clark as what they must have been -extraordinary men of some considerable genius who in many ways were handicapped --even crippled-- by the prejudices of their age, but who time and again rose so far above and beyond those same intellectual cages that we moderns can do nothing more than gape in wonder. If you're uncomfortable with history that isn't sanitized and stylized, there are several Lewis and Clark books for children you should consider. Frankly, I've always been bored silly with the heavily-varnished image of Lewis and Clark, the infallible, all-knowing demigods in three-cornered hats striding across a Hollywood landscape dispensing civilization to beknighted savages. Such trifle may make for good statues, I suppose, but lousy history. How much more inspiring to get to know them as them as human beings filled with fear and doubt --as we all are-- who nonetheless overcome incredible odds to accomplish Great Works. What distinguishes "Lewis and Clark for Dummies" is that it makes the point nicely that, as formidable as they were, Lewis and Clark were just two of a whole landscape filled with extraordinary people whose contributions made the Voyage of Discovery the most unlikely of successes. Time and again this expedition was rescued from disaster by the quick thinking, wisdom or the lucky stars of a sergeant, an enlisted man, a simple frontier guide or even the Black slave York or the Indian girl, Sacagawea. Time and again the Corps stumbled into the arms of Native peoples who could have ended their expedition and their lives but who chose instead to listen, to learn and in most cases, to teach. It is also refreshing to see the myth of Sacagawea "guiding" the expedition scaled back to something more true to life and find that from the greater perspective emerges the true story of her own unlikely heroism. (I was scratching my head about the choice of cover illustration, which shows an Italian-looking Sacagawea in the cliché role of "guide." Was this supposed to be the cover for different book?) One of the slogans of the Lewis and Clark Bicentennial is "Many Voices, Many Stories." Whether you've read a little or a lot about the subject, "Lewis and Clark for Dummies," will introduce you to many of those voices and stories --some for the first time-- and serve as an excellent companion and guide for your own "Voyage of Discovery."

Published by Thriftbooks.com User , 18 years ago
Wonderful reference book for those new to the world of Lewis and Clark history.

Lewis & Clark for Dummies is for anyone

Published by Thriftbooks.com User , 18 years ago
Having read a number of books about Lewis and Clark and their amazing expedition including "Undaunted Courage" by Stephen Ambrose I was amused to find this book for dummies at the book store. It seems that there is a dummies book for everything, but I never expected one on Lewis and Clark. I purchased the book, took it home with me, and started reading. It is really interesting and enjoyable; an easy, fun read. I have gleamed additional tibbits of information about them, others in the Corps of Discovery, Indians, geography, etc., that I did not know. This book would serve as a very book starting point for anyone interested in the early history of our country as well as Lewis and Clark Expedition aficionados. I gave this book five stars and a special thanks to the publishers.
Trustpilot
Copyright © 2022 Thriftbooks.com Terms of Use | Privacy Policy | Do Not Sell or Share My Personal Information | Accessibility Statement
ThriftBooks® and the ThriftBooks® logo are registered trademarks of Thrift Books Global, LLC