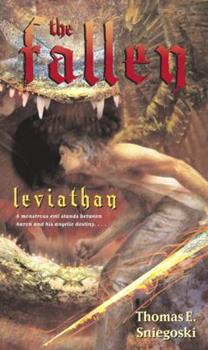 (Book #2 in the The Fallen Original Numbering Series)

Eighteen-year-old Aaron is on the run from the Powers that killed his foster parents and took his younger brother, Steven. With his dog, Gabriel, and Camael, a former Power, he is drawn north to a small town in Maine. Here Aaron, who still hasn't accepted his newfound heritage, finds comfort in the isolated, tight-knit community. But when Camael and Gabriel go missing, and their landlady suddenly attacks Aaron, he is forced to learn more about the...

Published by Thriftbooks.com User , 12 years ago
I read several reviews stating this wasn't as good as the other books in the series, perhaps, but I enjoyed it very much. It also opened the door to a new kind of creatures besides the ones in the current series. I know I should be saying this but if you like this series then this is a must.

Excellent 2nd of the series

Published by Thriftbooks.com User , 14 years ago
Aaron has come a long way - from a high school student to learning and becoming a Nephilim, the product of the union of a fallen angel and a mortal woman - he may be the one prophesized that will be the conduit between the fallen and God - to give redepmtion to the fallen who truly repent for their transgressions - The Powers, 'avenging angels' who have made it their mission to destroy the Nephilim - they have warped God's mission and are on Aaron's path - Aaron is accompanied in his quest by his dog Gabriel, who since Aaron saved him can communicate with Aaron and other fallen, and Camael, one of the fallen who has been changed since he heard the Prophecy, and fights against the Powers. They go to a small town in Maine, seeking Aaron's foster brother who has been taken by the Powers. The child has been transformed into a killing machine by the leader Vercheil. Things are not what they seem in this little town - most have been taken by a monster, Leviathan - even those who have tried to stop it, like the Angel Gabriel. Again, Aaron proves that he is more than just your average Nephilim. It is an excellent continuation to the series.

It's hard to find good sequels, but the Leviathan is great!

Published by Thriftbooks.com User , 18 years ago
This story gives much more inside on Aaron?s angelic destiny. We (the readers) watch him grow and develop as he learns to control his angelic nature. With Gabe, the magically enhanced Labrador retriever, and Camael, former leader of the Powers, Aaron sets out on a search to save his autistic foster brother Stevie who?s been captured by Verchiel, cruel leader of the powers. On the way he encounters an evil as ancient as the world itself including the Archangel Gabriel who also believes Aaron is the Nephilim of the prophesy that says that he will reunite the fallen with God.In the Leviathan, we learn a little more about the structure of the story as well as receive a foreshadowing of the events to come in the next book, Aerie. Just like in the first books, the descriptions are so real that if one allows oneself to, he or she can really feel the pain and anguish of the characters. This makes the book very powerful. I recommend the enter series to everyone who likes a good fantasy, and anyone who?s read the first book must read this one.My suggestion: keep an eye out for the prisoner from the Serbian monetary. There?s something about him?

Published by Thriftbooks.com User , 18 years ago
...A great read - I highly recomend it. I read it in one night, I just couldn't put it down. Much better than the first, it goes more into Aaron's past, and his ultimate goal. But don't read it before you read the first book! You'll be horribly lost.
Copyright © 2020 Thriftbooks.com Terms of Use | Privacy Policy | Do Not Sell My Personal Information | Accessibility Statement
ThriftBooks® and the ThriftBooks® logo are registered trademarks of Thrift Books Global, LLC