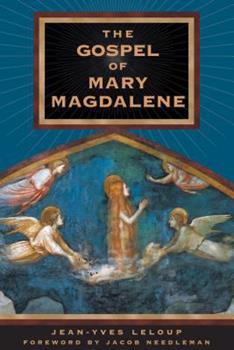 The Gospel of Mary Magdalene

Restores to the forefront of the Christian tradition the importance of the divine feminine - The first complete English-language translation of the original Coptic Gospel of Mary, with line-by-line commentary - Reveals the eminence of the divine feminine in Christian thought - Offers a new perspective on the life of one of the most controversial figures in the Western spiritual tradition Perhaps no figure in biblical scholarship has been the subject...

For a clarity and a deeper understanding…

Published by Shan , 7 months ago
I can’t say or know why this book was excluded from the cannon. One can waste time siting many theories regarding that, …or one can read this book and find enlightenment and continuity in one’s understanding of the greatest Book ever written, The Bible, and read the first hand account of Mary and her face to face experiences with God.

The Gospel of Mary Magdalene

Published by Deborah , 8 months ago
I ordered a copy of this book several weeks ago as a gift for my mother. When it arrived, I repackaged it and mailed it to her. She has just advised me that the first 45 pages of the book have been ripped out. I am sorry I didn't inspect it. I am very disappointed that you would mail out a book that had been damaged. I will look for another source to replace the one damaged.

A Little Goes a Long Way

Published by Thriftbooks.com User , 18 years ago
While the Gospel of Mary Magdalene is incomplete, it gives a sample of some beliefs and perspectives that were rejected by the early Church. You cannot read it alone, however. Accompany it with the Gospel of Thomas, the Odes of Solomon, and other gnostic works and you get a complete understanding of the Gnostic perspective, i.e., Christ is within. The commentary is excellent and helps to clarify the historicity of the gnostic philosophy.

WHO WAS THE GREATEST APOSTLE?

Published by Thriftbooks.com User , 19 years ago
March 15, 2005. I have amended this review in response to the disrespectful tone and dismissive manner in which some reviewers have chosen to portray Mary Magdalene and her Gospel. There are two basic types of skeptics, the mocker and the doubting Thomas. "Do not rebuke a mocker or he will hate you; rebuke a wise man and he will love you". Proverbs 9:8. I am giving Mary's skeptics the benefit of the doubt. They know not what they do. With that said, I offer the following Caveat: Jesus thought very highly of Mary Magdalene. He came to Mary's defense on "numerous" occasions in the mainstream Constantine New Testament. I would think twice before I cast any stones her way. On "one" such occasion the self-serving Judas Iscariot criticised Mary's use of expensive Nard on Jesus as a ritualistic act of Consecration. Judas complained to Jesus that the money from the sale of the expensive perfume could have been given to the poor. However, Judas' true agenda was to steal some of this money for himself and now he wouldn't be able to because of Mary's overzealous attention to Jesus. John then records that Jesus, in no uncertain terms, told Judas to leave Mary alone... John 12:1-7. As he told the angry mob on one occasion, as he told her self-righteous sister Martha on another, and so on. Attack me if you want. Criticise Leloup if you will. Ridicule alternative histories if you believe everything people in positions of authority have to say. But where Mary Magdalene is concerned I believe it wise that if a person doesn't have anything good to say about her then they should listen to the words of Jesus and "...leave Mary alone". This book is primarily for those that want to know more about the opinion of the person that was closer to Jesus than anyone else. Jesus left us no writings of his own; and yet so much has been written by others about what they say he said. In this light, shouldn't we read what his most intimate Disciple had to say now that the hand of Providence has brought her and her words to our attention. That the Gospel of Mary Magdalene is brief should be commended, not mocked. Should we mock Moses for only writting down Ten Commandments instead of Fifty? Or should we, like Jesus, make spiritual matters as simple and clear as possible. The greatest commandment is love. Honestly, read this book unless you really don't want to hear what a woman has to say. The Christian religion has never been monolithic. Even in the 1st Century there were differing opinions about Jesus and his message. Some called him Teacher, Prophet, Master, King, Lord, while others called him blasphemer, heretic, false-prophet, Devil... Peter felt one had to become a Jew, circumcised-etc., before one could become a Christian. Paul felt otherwise. Some claimed they had 'Secret' knowledge where Jesus was concerned, others claimed no such secret existed. "When he was alone, the Twelve and the others around him asked him about the parables. Jesus told them, "The 'secret' o

A clear look at a sometimes confusing text

Published by Thriftbooks.com User , 19 years ago
Jean-Yves Leloup has written a stunning commentary on the ancient Gnostic text, The Gospel of Mary. Discovered in the late 1800's and published with the more recently discovered Nag Hammadi Library, The Gospel of Mary has puzzled many readers because of its missing pages and esoteric language. This book will take much of the mystery out of this text for general readers and scholars alike.Most notable, I think, is the translation of "anthropos" as "human" rather than "man." This was a problem with the Gospel of Thomas as well; Jesus and the disciples make comments about women turning into men before they can find the Kingdom of God. At best, these comments were mystifying, and more than a few women found them to be shocking. With this translation, however, Leloup encourages us to think of the comments as meaning that women (and men) must become more spiritually aware before understanding the mysteries of Jesus' teachings.There is a little bit for everyone in this book, ranging from the original Coptic with facing English translation to an in-depth line by line commentary. It's more than enough to stimulate debate about Christianity's early developments, particularly relating to the authority of women.

Published by Thriftbooks.com User , 20 years ago
At last a Gnostic Gospel is presented in a way that even non-Gnostics can love. Leloup's excellent commentary adequately summarizes the Gnostic world-view without being intrusive, and the light he shines on the Gospel of Magdalene will make you ponder no matter what you believe, even if you believe nothing. It is short enough to read quickly -- but you probably won't. It's too good. Savor its wisdom and go back to it often. It's a spiritual experience par excellance and a bargain to boot.
Trustpilot
Copyright © 2022 Thriftbooks.com Terms of Use | Privacy Policy | Do Not Sell My Personal Information | Cookie Preferences | Accessibility Statement
ThriftBooks® and the ThriftBooks® logo are registered trademarks of Thrift Books Global, LLC