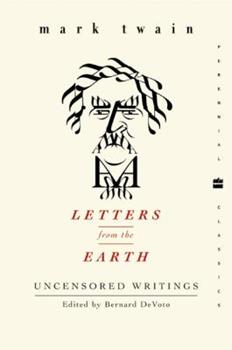 Letters from the Earth: Uncensored Writings

"I have told you nothing about man that is not true." You must pardon me if I repeat that remark now and then in these letters; I want you to take seriously the things I am telling you, and I feel that if I were in your place and you in mine, I should need that reminder from time to time, to keep my credulity from flagging. In Letters from the Earth, Twain presents himself as the Father of History -- reviewing and interpreting events from the Garden...

Published by Thriftbooks.com User , 16 years ago
This isn't Huck Finn - not by a long shot. Instead, it's a broad sample of Twain's writings the human race, a race he considers lost from the git-go. It starts with the eight Letters from Earth, a total of 40 pages or so. Twain uses the voice of an exiled angel, temporarily in terrestrial residence, to describe the utter insanity of human kind. He continues with Letters to Earth, another angelic text, this time in answer to the prayers of an uncommonly crass business man - anyone who's read Twain's War Prayer has a good idea of what to expect. It's not all spleen and satire, though. Some of the pieces here are just satire. Repentance, the Gorky Incident, Etiquette, and others are laugh-out-loud funny, even if they have a slightly acid tang, or maybe because of it. Cooper's Prose Style and The Damned Human Race are good ones, too. I have to admit, though, The Great Dark never seemed to find its stride, and editor's note suggest that Twain may have thought the same. If you haven't read these pieces, you haven't read Twain - well, you missed a lot. Go ahead, these short writings are well worth the effort, even after a century. //wiredweird

Satan's side of the story

Published by Thriftbooks.com User , 17 years ago
Letters from the Earth is an assortment of unpublished-for-60-years writings by Mark Twain. They cover a wide span of subject matter ranging from critiques of the prose style of another writer to the author's construction of the Old Testament and God from the perspective of Satan. In addition to Letters From Earth (Satan's), the contents includes Papers of the Adam Family, The Damned Human Race, Something About Repentance, Was the World Made For Man, In the Animal's Court, The Intelligence of God, The Lowest Animal and others.Readers who are offended by careful examinations of the meaning and implications of holy or sacred writings of the Old Testiment will not enjoy this book. The author, whatever his actual religious beliefs, probably wasn't an Old Testiment Christian. In this series of short writings he takes specific stories from the OT and holds them into the light away from the long traditions that accompany them in most of our minds. He examines the evidence of the stories for hints of what sort of creature God must be if the OT is true. He extropolates what Satan might be. I'm an admirer of this author and I believe everything he ever wrote is worth reading and digesting. I put this book alongside his best. But I also admit that if I harbored a microbe of religious fanatic somewhere inside me I'd be hard-pressed to enjoy reading Letters From the Earth.

Published by Thriftbooks.com User , 20 years ago
I first read "Letters from the Earth" in 1962, when I was a highschool student in Redding, CT. Redding was the last home of Mark Twain, and those who held his literary legacy as sacred, his library as a shrine, were definitely upset and embarrased when it was published. All this made it compelling reading for an adolescent who was beginning to notice the inconsistencies, hypocrisies and downright insanities of human belief. "Letters from the Earth" shook loose the stones of my foundation: a service for which I'll be forever grateful. Including himself in his witty attack on Earthly Man's frailties, Twain's observations encouraged me to trust my own perceptions, prod sacred cows, and ultimately to forgive myself for being at best, "a nickel-plated angel".I've read, reread, and revered most of Twain's legacy, but I think of this particular book as a treasurebox full of letters from a brilliant, irascible but loving uncle each of us should have known sometime in our lives. I only wish I'd remembered to share it with my own kids when they were adolescents. I must make amends right now...AFTER I've reread it myself.

Published by Thriftbooks.com User , 20 years ago
Mark Twain remains the foremost writer in North America's literary scene. Widely imitated but never equaled, his perception and wit gave him mastery over nearly every topic. Although derided for it in his own time, his stature derives from his audience: he wrote for everyone, excluding none. Those who know Twain will find this collection a decorative capstone to works published a century ago. Nearly every work of social commentary [and few of his works miss that definition] touched on the topics presented here. But he harboured deeper feelings on many subjects, particularly the sham of Christianity, noting them down and hiding them away. Two world wars and world depression shattered many illusions and changed attitudes. Finally, this wonderful collection was released to be joyfully received by Twain fans. One can only wonder what he would have thought of the reaction.The commonalty among the essays is man's place in the universe. The title is invoked in a series of letters from a banished archangel. It's a cold-water bath for the new Twain reader. How many Christians have truly considered what awaits them in their "heaven"? An earlier essay, Captain Stormfield's Visit to Heaven suggested Twain's thinking on the subject, but the Letters From the Earth is a raw inquiry into what environment "paradise" holds for the unthinking. Other aspects of Biblical teachings are covered in the Papers of the Adams Family. What society developed in those centuries between Genesis and The Deluge? Twain surveys the vagaries of his contemporary scene and projects them backward to that early age. It's an hilarious review of human frailty well suited to modern outlook. It's also a cry from heart at the realization of little humans change over time.It's noteworthy that Twain would notice Alfred Russell Wallace, who produced a nearly identical theory of evolution to Charles Darwin's. Darwin would have secretly admired the essays comprising The Damned Human Race. After a gentle acknowledgment to Wallace's suggestion that the heavens and earth were purposely designed for man, Twain utterly demolishes the idea. That he used evidence only beginning to be understood is a tribute to his genius. The essay should be read by every churchgoer [and not a few science teachers] living today. The clarity of his logic, presented with the wit only Twain could present, makes this subset one of the highlights of the book.Twain remained interested in everything he encountered in his lifetime. He maintained a fine balance between castigating unsupported revelations and applauding scientific progress. The Great Dark is a venture into the microscopic world through the mechanism of a dream. The dreamer is drawn into a droplet of water, sailing an endless ocean with his family and the crew of an unsuspecting ship. It's a tale that worthy of comparison with any fantasy of Jules Verne.Why there are so few reviews of this book here is disturbing. More people need to read this collection and under

Published by Thriftbooks.com User , 22 years ago
Truly, Mark Twain is one of the greatest American writers. And without a doubt, Huck Finn is among the few candidates for "The Great American Novel." However, one cannot completely understand Twain without reading LFTE. This is the work of the TRUE Twain.(The one that will never be loudly applauded) His appraoch towards organized religion is without restraint, and his mockery is often hilarious. Please read this if you want to learn the inner- workings of America's greatest satirist.
Trustpilot
Copyright © 2022 Thriftbooks.com Terms of Use | Privacy Policy | Do Not Sell My Personal Information | Accessibility Statement
ThriftBooks® and the ThriftBooks® logo are registered trademarks of Thrift Books Global, LLC