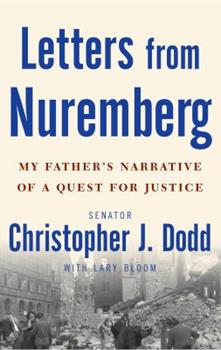 Letters from Nuremberg: My Father's Narrative of a Quest for Justice

For some sixty years, the Nuremberg trials have demonstrated the resolve of the United States and its fellow Allied victors of the Second World War to uphold the principles of dispassionate justice and the rule of law even when cries of vengeance threatened to carry the day. In the summer of 1945, soon after the unconditional surrender of Nazi Germany, Thomas J. Dodd, the father of U.S. Senator Christopher J. Dodd of Connecticut, traveled to the devastated...

Published by Thriftbooks.com User , 15 years ago
This is a great book that provides a unique perspective on the Nuremberg trials. Highly recommended.

Insight into an important slice of history

Published by Thriftbooks.com User , 15 years ago
As a young journalist, I knew Tom Dodd, and knew he'd been a prosecutor at Nuremberg -- but knew little else. His letters to his wife, compiled by his son Chris Dodd, have wonderful insights into the inchoate process with which the Nazi war-crimes trial began, and the evolution into a model for future dealings with brutal war behavior. Along the way I was fascinated to learn that Tom Dodd, whom I knew as a Cold War hawk, was deeply disturbed by what wars do.

Published by Thriftbooks.com User , 15 years ago
Senator Dodd reminds us all, through the letters of his father, of our need to maintain a steady moral compass as we negotiate a difficult balance between the security of our nation and the civil rights that are the backbone our country was built upon. At a recent book signing at "Politics and Prose" in Washington, DC, Senator Dodd was asked if his father's career influenced his decision to become a public servant. He told the story of his father, interviewed weeks before his death, being asked if he knew how his political career would end (censure and then failing to win re-election)would he do it again. Senator Thomas Dodd answered (and I am paraphrasing) "A lawyer can help only so many clients in his career - a doctor only so many patients but as a public servant one is able to help millions of people. I would do it again without hesitation." This book offers facinating insite into the dedication of this honorable man to his country, to his family and to the rule of law that makes us great. (And as an aside, I-Man is wrong. Chris Dodd is not riding the coattails of his father. Anyone taking the time to familiarize themselves with the work that he has done in his 30 plus years as a public servant would know that he is exceptionally qualified to be the President of the United States.)

Published by Thriftbooks.com User , 15 years ago
I really enjoyed this book. It's a collection of letters from the number 2 prosecuter of the Nuremberg trials. Not only is it from his point of view, it also shows the lovingness that existed between him and his wife, that these letters were writen to. It's a shame that someone can not critique a book on only it's content with out putting his/her opinion, let alone a political opinion.
Trustpilot
Copyright © 2022 Thriftbooks.com Terms of Use | Privacy Policy | Do Not Sell My Personal Information | Cookie Preferences | Accessibility Statement
ThriftBooks® and the ThriftBooks® logo are registered trademarks of Thrift Books Global, LLC