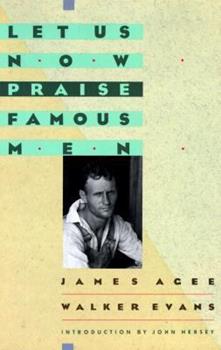 by James Agee and Walker Evans

Agee's colleague at Time in the 1940s, John Hersey, writes a major evaluation of Agee's work and the Agee legend in a new introduction to this literary classic. 64 pages of photos.

Published by Thriftbooks.com User , 16 years ago
Excellent editon of this wonderful, classic work. A series of visual and verbal snapshots of the South as a third world country, the South of the 1930's.

Published by Thriftbooks.com User , 18 years ago
Many people argue about Agee's complex text. The entire body of Let Us Now Praise Famous Men is written in a kind of highly emotional euphoria in which Agee combines his own thoughts and perceptions with exhaustive description of the world around him. His intense feeling causes the writing to be, by conventional grammatical standards, virtually unreadable. Once the reader gets past his chapter-long sentences and widely varying themes, however, the book emerges as one of the greatest written accomplishments of the 20th century.While the nominal subject of the documentary is an in-depth exploration of three tenant farming families during the Great Depression, the real project (and Agee himself admits this in his remarkably confessional prose) is the documentation of his own experience living with those farmers for several weeks--sleeping in their vermin-infested beds, eating their home-cooked food, and interacting with them on a human level. In addition, Agee self-consciously writes the text and explores the act of writing, both during his stay with the farmers and several years later, when he completed the vast majority of the book.The final product is a patchwork book pieced together from Biblical prayer, Evans's photographs, Agee's flawless descriptions (which, in several cases, may be more accurate than Evans's probably manipulated prints) and meditations on writing, poverty, art, and day-to-day human experience. Two things make this work remarkable: Agee's honesty (he never claims to be objective or non-judgemental) and his innate talent for description. I approached this book with an open mind, and found it to be one of the most thoughtful and rewarding works I have ever read.

The Famous Men Revisited: and other comments on James Agee

Published by Thriftbooks.com User , 21 years ago
In one of the most edifying ways, James Agee illustrates the life of the Southern tenant sharecropper in the Great Depression. Agee's writings coupled with the eloquent photography of one notable Walker Evans, distinguishes the book in a elite category unparalleled by few if any whatsoever. The circumstances the sharecropper endured during the Depression not only working the land but also at home with family was rigorous and was additionally exposed very thoroughly in Agee's writings. The book is a must read for anyone interested in the History of the Great Depression era/New Dealism. One other book of notable mention for those interested is Larry Nelson's- KING COTTON'S ADVOCATE.

Published by Thriftbooks.com User , 22 years ago
Living only 3 miles from the site where this book was born, I can easily still see the horrors of what Agee and Evans witnessed. Rual Hale County, Alabama is still a place slow to develope, but with still as much pride and hope as was seen in the Depression years. The book is, at times, unequelled because of the direct accurancy describing the people, smells, conditions, and lifestyles of the three families. It is simply a work of art. The families are still around, and PBS even shot a piece on the book; however, the reminders of what was can still pierce the souls of all who live in our area. We have come a long way, but there are "miles to go." It is a work of art. Powerful! It needs to be followed up- yet I doubt that there could ever be such a quality work to follow that of Agee's.

A masterpiece of reportage

Published by Thriftbooks.com User , 24 years ago
Agee wrote the text and Evans took the photos for this Works Progress Administration project on sharecropping in the South during the Great Depression. Agee's Faulkneresque ramblings are perfectly complemented by Evans' stark photography. To put it simply, the written word integrated with the visual image has never been more striking.
Copyright © 2020 Thriftbooks.com Terms of Use | Privacy Policy | Do Not Sell My Personal Information | Accessibility Statement
ThriftBooks® and the ThriftBooks® logo are registered trademarks of Thrift Books Global, LLC