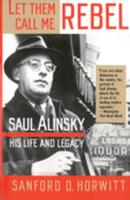 Let Them Call Me Rebel: Saul Alinsky: His Life and Legacy

In the course of his flamboyant career as an all-purpose activist, Saul Alinsky went from organizing working-class ethnics in one of Chicago's most blighted neighborhoods to mapping out strategies for the civil rights and antiwar movements of the 1960s. He enlisted allies--from Catholic clergymen to labor unionists and black activists, in battles waged against opponents from slumlords to the Eastman Kodak corporation. The range of Alinsky's activities,...

A profound and inspirational biography

Published by Thriftbooks.com User , 12 years ago
I feel compelled to write my opinion as a person who works in communities and also a person who likes to know how to change our society for the better. Reading this book was an eye-opening and invigorating experience. First, as a scientific piece of work, the biography is excellent. It is based on an enormous research, tens, maybe hundred of interviews, documents and historical evidence from the 1900s to 1970s. Every single claim in the book is backed by a reference to a document or interview. Sanford Horwitt also put great efforts to organize the variety of facts and events, which is extremely difficult, as Alinsky worked on several tracks in different places with different approaches. The personal and public life of Alinsky are also well combined in the book. In the end, the book follows a general chronological line, but the big chunks of Alinsky's experience are selected and collected quite well. The book is written with a visible positive attitude to Alinsky's cause. Nonetheless, it is very sincere, and does not omit the myriad weaknesses or failures of Alinsky. Especially for the professional reader (organizer, sociologist, psychologist, etc.), it is very informative about the details and real facts about working with people. So, in this sense, I recommend it to people interested in history, social sciences or the Humanity Sector. Second, why read the book, for immediate practical reasons? Well, here's why. Alinsky is valuable as a rare example of a non-socialist left visionary and practitioner. (He is NOT a socialist, my dear Neo-McCarthyists). He is not a socialist in a very important sense. He embraced the competitive, every-man-for-himself democracy in USA, and he worked with underprivileged groups exploiting the strengths and weaknesses of US democracy "as it is". He wanted the weak to get power in order to turn the balance in the competitive democratic scene. Why he wanted that? He says: "I hate to see people get pushed around". No Marxism here. How is the power to get to the weak - through community organizing. This is it. What in USA is labeled as "socialist" is not the real socialist thing. Socialism means a strife for a better society, for fundamental change. Alinsky was not into ideology. He reveled in the power struggle in US democracy and took advantage of every single unfair leverage that the strong - the corporations, the Chicago Political Machine, the Government, the White Community - whoever - had. Alinsky is an alternative to the much more risky real socialist approach to reforms, which undermines traditional American values like individualism, competition, greed, aggressive fixing of the objects, etc. Another important point I took from the book is the community approach experience. Alinsky was one of the pioneers of the true community development strategy, still written in the slogan of his Industrial Areas Foundation: "We, the people, will work out our own destiny". Rule Number One of Alinsky was: "Never do for the pe

Published by Thriftbooks.com User , 13 years ago
Although I am only about one hundred pages into this book, it has been both and easy and interesting read so far. This sociologist/criminologist experienced Chicago from the late 1920's and I am up to the beginnings of his BYNC (Back of the Yards Neighborhood Council). I bought this book believing this to be the community organization which Alinsky started that was the organization which hired Barack H. Obama after he returns to Chicago from Havard Law School.

Let Them Call Me Rebel

Published by Thriftbooks.com User , 13 years ago
This book is required reading for anyone who is interested in understanding what a "community organizer" is and what he does in Chicago. Barack Obama worked for organizations founded by Saul Alinsky and run by his proteges. Obama never gives details of his community organizing, but this book tells what he would have been doing for his several years in the 1980's in Chicago: teaching people how to boycott, protest and threaten the economically and politically powerful in order to get what they want. It is a unique training, to say the least, for a Presidential candidate.

The Best of the Bunch

Published by Thriftbooks.com User , 18 years ago
Saul David Alinsky, the subject of this biography, is oft written about but rarely presented without the bias of the writer leaking through. Alinsky's life was, by design, controversial. He maddened, inspired, angered and incited. Who can blame his critics from all sides of the political spectrum from having a last go at it now that he's gone. That being said, Horwitt's biography presents Alinsky in the clearest and fullest light of any who have undertaken this difficult chronicling. He does not get in the way of the wonderful stories and experiences that made up Alinsky's life. He brings alive Alinsky and the world he helped shape.

Be thou a man

Published by Thriftbooks.com User , 22 years ago
Saul Alinsky was a complex and colorful man of great integrity and a civic activist with world-wide influence. Dedicated to empowering the politically weak and unorganized, Alinsky is rightly credited as the founder of community self-help. In this highly readable account, we come to appreciate Alinsky's empathic genius and his flair for showmanship. He had an uncanny personal gift for discerning which acts of protest would get attention and results, as well as an ability to teach others some of the tricks of the trade. Of all the anecdotes in the book, perhaps the most memorable concerns the time that young Alinsky was hauled before his rabbi for socking a kid who had beat up his own best friend. Alinsky excuses his behavior as "eye for an eye", and part of the "American way". His rabbi's answer is memorable. "You think you're a man because you do what everyone else does. Now I want to tell you something the great Rabbi Hillel said: 'Where there are no men, be thou a man.' I want you to remember that." And Alinsky did.
Trustpilot
Copyright © 2022 Thriftbooks.com Terms of Use | Privacy Policy | Do Not Sell My Personal Information | Accessibility Statement
ThriftBooks® and the ThriftBooks® logo are registered trademarks of Thrift Books Global, LLC