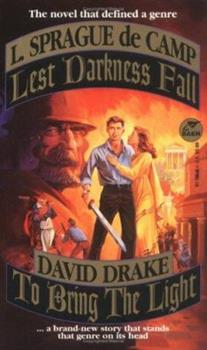 Lest Darkness Fall & To Bring the Light

This description may be from another edition of this product. When Rome fell, the light of reason flickered out across the Empire. The Dark Ages had begun. Could a man from the 20th century prevent the fall of Rome? When lightning struck, Martin Padway was...

Published by Thriftbooks.com User , 14 years ago
Lest Darkness Fall by L. Sprague de Camp is the perfect introduction to this golden-age great science-fiction author. De Camp, along with Isaac Asimov, Robert Heinlein, L. Ron Hubbard and others, were all part of John W. Campbell's, editor of Astounding and Unknown, stable of writers. These men created modern Science-Fiction. De Camp pretty much created the alternate universe story with this novel. Fans of de Camp can discuss his life and works at a Yahoo Discussion Group called d_for_de_Camp. Hopefully, one day soon, de Camp will be rediscovered and appreciated for the talent he is. His books always delight and should be reprinted for a new generation of readers. This book is one of his best.

Published by Thriftbooks.com User , 19 years ago
Lest Darkness Fall was my introduction to L. Sprague DeCamp, and I have been a fan ever since. I even bought this book to read the homage story it contains. I have read and reread this book several times. You will find you will want to study the period of history this book covers. After you study, you will read the book again and apperciate DeCamp's depth of knowledge. When I find an author like L. Sprauge DeCamp, I feel comfortable reading any book ther author writes. DeCamp has an earthy style that is captivationg.

The Origin of Alternate History...

Published by Thriftbooks.com User , 19 years ago
"Lest Darkness Fall..." is arguably the novel that began the entire science fiction sub-genre of alternate history. Centering around a Ph.D. candidate studying in Rome in the late 1930s, early 1940s, it tackles the idea question of "What would you do if you had the chance to save the Roman Empire?"Perched at the very edge of the twilight of the (Western) Roman civilization, it realistically tackles the political, scientific and cultural problems of the 5th and 6th centuries A.D. in southern Europe. De Camp was not only a famous science fiction author (a lesser-known contemporary of Isaac Asimov), but he was a published historian and classicist in his own right. This book showcases all three of those fields in one go - at the height of his writing talent.The short story paired with this, "To Bring The Light" by David Drake, is less meant as a serious contender in terms of literary quality than an homage to de Camp's work. Dealing with the founding of the Roman civilization in much the way that "Lest Darkness Fall..." deals with it's death throes, it succeeds in showing the David Drake's admiration for de Camp's work.Ultimately, though, I'd buy the book for "Lest Darkness Fall...": it's a surprisingly ignored but wonderful novel that paved the way for what has become an entire sub-field of science fiction. Whether you like alternate history or not, though, this book should not be missed.

A classic story with a mediocre one hanging on

Published by Thriftbooks.com User , 21 years ago
"Lest Darkness Fall" is considered a classic of science fiction, and justifiably so. If you enjoy "displaced in time" stories, or if the idea interests you, you can expect to like the book. The hero is a PhD-to-be who gets mysteriously plunged back to Rome in its declining years, and takes it on himself to use what he knows and avert the coming dark ages. It is funny in places, sad in a couple of places, and exciting all through. The other part of this book is a rather forgettable story by an excellent writer, David Drake. If you enjoy this book, look up "Lord Kalvan of Otherwhen" by Piper, or "Island in the Sea of Time" by S.M. Stirling

Published by Thriftbooks.com User , 22 years ago
Lest Darkness Fall is an engaging story that takes place in a period and location not usually the focus of alternate history: 6th century Italy. Knowing little about the real history of Italy during this period, I realize I missed some of de Camp's more nuanced references. And I am not a big fan of military history, which works its way into the last chapters of the book. But it was all great fun--and highly recommended.
Copyright © 2020 Thriftbooks.com Terms of Use | Privacy Policy | Do Not Sell My Personal Information | Accessibility Statement
ThriftBooks® and the ThriftBooks® logo are registered trademarks of Thrift Books Global, LLC